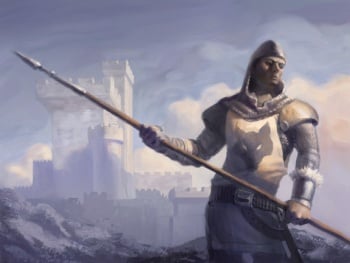 House Stark guards are guardsmen and men-at-arms[1] in the service of House Stark. One of the buildings at Winterfell is the Guards Hall.[2][3]

Lord Eddard Stark's guards in King's Landing wear silver mail,[4][1] steel caps,[5] and long cloaks of heavy grey wool decorated with white satin borders.[6] Their cloaks are pinned with hands of beaten silver, as Ned is the new Hand of the King.[6] Guards in the wolfswood wear mailed shirts and coifs.[7]

Before the outbreak of Robert's Rebellion, Lord Rickard Stark went south to King's Landing with two hundred of his best men[8] since King Aerys II Targaryen had imprisoned his heir, Brandon. Father and son were executed by the Mad King,[9] and none of their men returned to the north.[8] 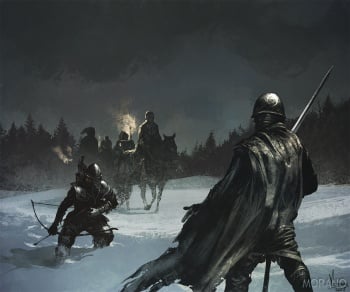 Jory Cassel serves as the captain of Lord Eddard Stark's household guard.[10] Ned brings the best[11] fifty of his men, a quarter of Winterfell's normal guard,[12] to King's Landing under the command of Jory.[6] Robb Stark names Hallis Mollen the new captain of the guards at Winterfell,[13] and Robb often drills the remaining guards.[12]

The bones of Lady are brought to Winterfell by guards.[8]

Ned has twenty Stark guards under the command of Alyn assist the gold cloaks in keeping order in King's Landing.[5] Jory, Alyn, and Harwin participate in the Hand's tourney.[14] Ned invites Anguy to join his guards, but the archer refuses.[15]

After Jory is killed while fighting red cloaks in the streets of King's Landing,[7] Ned names Alyn his new captain.[16] Twenty guards led by Alyn join Lord Beric Dondarrion's force to bring Ser Gregor Clegane to justice,[17] and Alyn carries the Stark banner when they depart the capital.[4] The injured Ned remains in King's Landing and names Tomard his new captain.[16]

In the aftermath of King Robert I Baratheon's death, Fat Tom and the other Stark guards in King's Landing are killed when Janos Slynt's gold cloaks and Lord Petyr Baelish ally with Cersei Lannister instead of Ned.[1][18] Three men wearing the grey cloaks of House Stark guard the Wind Witch, the ship which Ned had hoped would take his daughters Sansa and Arya from King's Landing. The incognito Arya does not recognize the three men, however, and leaves before her identity can be discovered.[19]

When Robb leads the northern host south from Winterfell in response to Ned's imprisonment, Hal Mollen wields the Stark banner on a standard of grey ash.[8] Most of Winterfell's guards are part of the host.[11] Hal protects Catelyn Stark during the battle in the Whispering Wood, while Robb has a personal guard of thirty nobles.[20]

When Robb sends Ser Cleos Frey to King's Landing with his peace offer, among his demands are the return of the remains of Ned and his father's slain guards.[21]

Hallis commands the Winterfell men who are part of Catelyn's escort when she travels to Renly Baratheon's camp at Bitterbridge.[22] Cat tasks with Hal with an honor guard to protect the silent sisters bringing Ned's bones from Riverrun back to Winterfell.[23]

Bran, the Stark at Winterfell while Robb is away, notices a number of new men at Winterfell during the harvest feast.[24] Theon Greyjoy and a small group of ironborn kill or capture Bran's inexperienced guards in the capture of Winterfell.[3] The captive guards are later killed in the sack of Winterfell by Ramsay Snow's men from the Dreadfort.[25]

Harwin recounts to Arya how Alyn and many others from Beric's party were killed by the Mountain's men during the battle at the Mummer's Ford.[26]

Robb and most of his host are killed during the Red Wedding.[27][28]

The Starks look for courage and loyalty and honor in the men they choose to serve them.[29]