Bran watches the Karstarks arrive, then goes to the godswood to pray. He is interrupted by Osha, who tells him about the old gods and the Others. She insists that Robb should be marching north not south. Bran passes on her advice to Maester Luwin. Then Robb marches his army south.

Bran watches from a guard turret with the far-eye of Maester Luwin as the Karstark forces arrive at Winterfell. When Robb heard the news that their father, Lord Eddard, had been taken captive in King's Landing, he called the Stark bannermen together for war. The Karstarks are the last to arrive: three hundred horsemen and near two thousand foot lead by Lord Rickard Karstark with his sons Harrion, Eddard, and Torrhen riding beside him. The Karstarks are said to have Stark blood in them, going back hundreds of years, but the fierce men do not look like Starks to Bran.

Bran has not been allowed to leave the castle since the incident in the wolfswood. Robb insists that there are no men available to guard him and is not dissuaded by Bran’s argument that Summer will protect him. The incident in the wolfswood shames Bran as he is not able to protect himself; even Rickon would have been able to kick them. A year ago he would have visited the winter town anyway, climbing over the walls, but now he can only watch with Maester Luwin and Hodor.

Maester Luwin has taught Bran all the banners and now he has faces to associate with them. Bran asks how many knights there are and Luwin tells Bran that there are over twelve thousand men, but only three hundred knights because the north holds to the old gods and knights are anointed in a sept of the Faith of the Seven. However, Luwin assures him, "a man's worth is not marked by a ser before his name." Bran asks when they will leave and is told they must leave soon or the countryside will be eaten clean. Robb has a long way to go and the fighting has started. More men will join Robb as he travels south.

Bran tells Hodor that he does not want to watch anymore. Maester Luwin reminds Bran that his brother is busy greeting the Karstarks, but Bran assures him that he wants to visit the godswood. Hodor now carries Bran in a basket strapped to his back, an idea Luwin got from the baskets used by the serving women to carry firewood. Being carried this way does not shame Bran the same as being carried like a baby, although Hodor sometimes forgets Bran is on his back when going through doorways.

When Bran exits the castle there are Karstark men arriving. Some men mock him, but Bran has been warned of this by the maester. His attitude is to let them mock since he does not want to stay in his bedroom. Bran calls for Summer, and the Karstark horses reel as the direwolf goes by.

When Bran arrives in the godswood, he pulls himself out of his seat on Hodor's back using a branch of the weirwood. Then he lets Hodor lower him down beside the water and says he wants to be alone with Summer. Bran has been finding himself drawn more to the heart tree and now he takes comfort from its deep red eyes; the old gods are watching over him. He feels safe and it gives him time to think, which he has been doing a lot of recently.

Bran prays for Robb not to go away, for the safety of his family, and for Rickon to understand. Rickon has grown wild and violent since he learned that Robb was leaving. Once Rickon disappeared and, when he was finally found down in the crypts, the youngest Stark had slashed at the men with a sword and Shaggydog bit Gage on the arm and took a chunk out of Mikken's thigh. It took Robb and Grey Wind to bring Shaggydog under control. After that Farlen chained Shaggydog in the kennels and now Rickon cries even more. 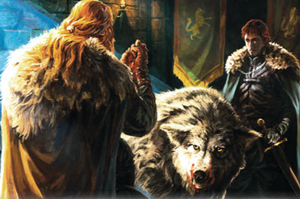 Luwin and Bran have both asked Robb to stay but he refuses, saying he has no choice. Bran believes this is only half a lie because Robb could send someone else to guard the Neck. Robb’s response was that their father would not send others to die while he stayed behind the walls of Winterfell. Robb denies all who request being given supreme battle command. Many of the lords try to test Robb by making demands, but he is able to handle them much as his father did and bend them to his will, even when anger flares. When Greatjon Umber demanded the right to command, he drew his sword against Robb. Grey Wind immediately reacted by biting off two of his fingers. Since the incident, the Greatjon has been Robb’s staunchest supporter.

That night, Robb came to Bran’s bedchamber pale and shaken. Robb also told Bran that the most frightening bannerman is Roose Bolton, who never says a word but only looks at him. When Bolton does this, all Robb can think of is the room in the Dreadfort where the Boltons hang the skins of their enemies. Bran states that this is only a story of Old Nan's, but then asks for confirmation.

There are many horrible stories that come with travelers, and it is impossible to say which is real, although some are obviously untrue. Then the letter from Sansa arrived with the seal of House Stark. After Robb had read the letter he crushed it. Sansa had said nothing of Arya and Robb asked what is wrong with her. Bran replied that Sansa has lost her wolf, remembering the day four of the guardsmen returned with bones of Lady. They buried the bones in the lichyard with the faithful servants of Winterfell; she went south and only her bones returned, like Lord Rickard Stark, Brandon Stark, and two hundred men, and none returned. Now their father, Arya, Sansa, Jory Cassel, and Fat Tom have gone south and not come back and later mother and Ser Rodrik left and have not come back. Now Robb is going south and it frightens Bran. Bran prays that the gods look after Robb and his men going south, and that they defeat the Lannisters and bring Father back. 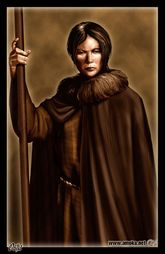 Osha the wildling, by Amok ©

Bran is surprised by words from Osha who is apparently able to move quietly in the shackles she has to wear. She tells him that she can hear the gods answering him. When Summer comes around the pool to sniff her, she flinches. Bran calls Summer back and asks Osha, whom he has not seen since she was taken captive, what she is doing here. The spearwife replies they are her gods too and the only gods north of the Wall. Bran notes that she looks more womanly with her longer hair and her dress of brown roughspun. She tells Bran that Gage lets her out to do her prayers from time to time while she lets him do what he wants under her skirt when he feels the need; it is nothing to her, she likes the smell of flour on his hands and he is gentler than Stiv.

She offers to leave but Bran asks her to stay and tell him what she means about hearing the gods. She tells him to open his ears, to which Bran replies that it is only the wind. Osha asks him who sends the winds, insisting that the old gods can see him and hear his words. Bran asks what they say and Osha replies that they are sad because they cannot help his brother in the south. The old gods have no power there because all the weirwoods were destroyed thousands of years ago; they cannot watch over his brother because they have no eyes.

Now Bran listens and it seems there is sadness in the wind, but then he only hears Hodor, who arrives naked from his bath in the hot springs. When Osha sees Hodor she declares that his size denotes giant blood in him. When Bran tells her that Maester Luwin taught him that there are no more giants, Osha tells him that the maester should ride beyond the Wall. The giants sometimes breed with men beyond the Wall, producing half-breeds, though it goes much worse on the women that have sex with a giant. She then asks Bran if he knows what she is talking about and he tells her does, as he has seen animals mating.

As Hodor leaves to dress at Bran’s command, Bran admits that he is very big. Osha confirms there are giants beyond the Wall, and worse than giants: when men leave their fires they often do not come back, or sometimes they come back as wights with blue eyes and cold black hands. Osha explains that she tried to tell Robb, Maester Luwin, and even Theon Greyjoy of this, but they would not listen. She asks Bran why else she would flee south in the company of Stiv and the rest of those fools. She goes on to declare that Mance Rayder, once a sworn brother of the Night's Watch, thinks he can fight the wights. Osha states that she, unlike Mance, is of the north, from a long line of the free folk. Osha laments again that she cannot get Robb to listen and Bran suggests that perhaps Robb will listen to him. Osha is dubious but gives Bran the message:

You tell him this, m’lord. You tell him he’s bound on marching the wrong way. It's north he should be taking his swords. North, not south.

Bran does not get to tell his brother this, because Robb takes his meal in the solar with the great lords to make final plans for the march, while Bran has to act as the host to the Karstarks in the Great Hall. When he arrives in the hall, Bran can feel the eyes on him and hears them murmuring about him being broken. He whispers under his breath that he wants to be a knight, which Maester Luwin overhears. He tells Bran that some call his order the “knights of the mind,” and that Bran could forge a maester’s chain at the Citadel in Oldtown. Bran states that he wants to learn magic and that the crow promised he would fly. The maester says he can teach Bran many things but no one can teach him magic. Bran replies that the children of the forest could teach him. Then he remembers what he promised Osha, and tells the maester of the threat in the north. The maester promises to talk to Osha, but it is obvious even to Bran that what he has said has made little impression.

Two days later, Robb and his army march south. Robb tells Bran that now he must be the lord, the Stark in Winterfell. Bran—who has never felt so little, alone, or scared—does not know how to be a lord. He is told to listen to Maester Luwin and to take care of Rickon who has refused to say goodbye, claiming that no one ever comes back. Robb states that Mother will be home soon and promises to bring Father back. As Robb’s force leaves, Bran remembers Osha's words: he is marching the wrong way. Then he hears the cheers from the village, and thinks they will never cheer for him. All that seems to be left in Winterfell are women, children, old men, and Hodor.