Shaggydog is the direwolf belonging to Rickon Stark. Rickon is known to shorten his name to Shaggy. He is the litter-mate of Grey Wind, Summer, Lady, Nymeria and Ghost.

Shaggydog's fur is all black, and his eyes are bright green.[3] 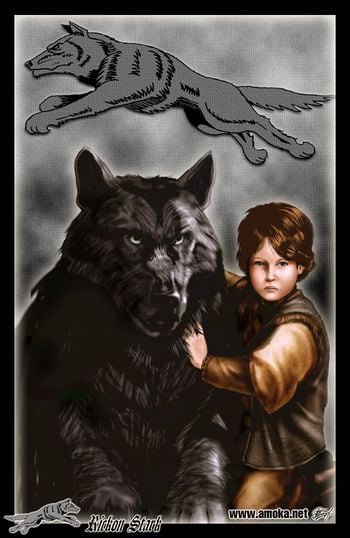 Rickon Stark and Shaggydog, by Amok ©

Shaggydog is found in the snow with his brothers and sisters by Robb Stark and Jon Snow.[4] They are taken back to Winterfell, where Shaggydog is chosen by Rickon Stark. After Bran Stark's fall, Shaggydog often joins Summer and Grey Wind in howling beneath Bran's window.[5] During Tyrion Lannister's return to Winterfell, Rickon arrives with Summer, Grey Wind, and Shaggydog in tow. When they catch the scent of Tyrion, the three direwolves move in to corner him and Tyrion is only saved when the Starks call off their wolves.[3]

Once Rickon discovers that Robb may be going off to war, he becomes angry and Shaggydog begins to take after his master, biting Gage and Mikken. Farlen chains Shaggydog up so he can bite no one else and Rickon becomes even more upset.[6] Just before news arrives of Lord Eddard Stark's death, Maester Luwin, Bran, and Osha descend to the crypts of Winterfell. There Shaggydog attacks Luwin, but the direwolf is stopped from doing more damage by the intervention of Summer. Afterwards they go to the maester's tower to wait for the news of Eddard's death.[7]

Shaggydog and Summer are confined to the godswood of Winterfell after Shaggydog bites Little Walder Frey.[8] Bran attempts to call Shaggydog to his side when visiting Summer, but the wolf remains distant.[9] After the sack of Winterfell, Shaggy accompanies Osha and Rickon.[10]

Through his warg bond with Summer, Bran senses that Shaggydog grows more distant every day.[1]

In Jon Snow's wolf dream, Ghost senses his black brother fighting and devouring a goat with one long horn.[2]

Wex Pyke claims Shaggydog is on Skagos with Rickon and Osha.[11]

Meera: Did you know they would be so big?
Jojen: They will be bigger still before they are grown. The black one is full of fear and rage, but the grey is strong ... stronger than he knows ... can you feel him, sister?[12]