A Clash of Kings-Chapter 16

Bran receives the lords of the North at Winterfell for the harvest feast. Each has business to discuss, and many are interested in wedding Lady Donella Hornwood, whose husband and only son have died in the south. Lady Hornwood herself is concerned that Ramsay Snow, the bastard of the Dreadfort, means to seize her lands. The night Cley Cerwyn arrives with news that Stannis has declared Joffrey a bastard, Bran dreams of a golden man throwing him from a tower.

Bran is awake long before dawn. Winterfell is full of guests for the harvest feast, and he must play the prince. He always wanted to be a knight, not a prince, but now that he is broken he must spend his days listening to old men discuss things he barely understands. Lord Wyman Manderly arrived from White Harbor two day ago, and Bran welcomed him from his father's high seat. Afterward, Ser Rodrik Cassel said he had done well, but Manderly was only the first. Many lords with matters to discuss with their overlord will use the feast as a pretext.

Hodor arrives to help him dress. Bran prefers to dress himself, but some things are just quicker with help. Bran is astonished by Hodor's deftness and strength and says he could have been a great knight if the gods had left him his wits. Mounting into his basket, Bran instructs Hodor to carry him downstairs.

Out in the yard, Bran watches the Walders jousting against quintains. Bran notes that Little Walder struck harder, but Big Walder sat his horse better. When Little Walder sees Bran on Hodor's back, he remarks that Hodor is an ugly horse, which angers Bran. The Walders continue to insult Hodor and Little Walder begins bumping him with his horse. Bran grows angrier and threatens to sic Summer on them, but Little Walder points out he is wearing armor and says he wants a wolfskin cloak. Then, Maester Luwin arrives to break up the argument and chastise the Walders. Big Walder has the grace to look ashamed, but Little Walder remains haughty. Luwin reminds them that good lords protect the weak and warns them to stay out of the godswood. He then calls on Bran to come with him to meet Lord Wyman. 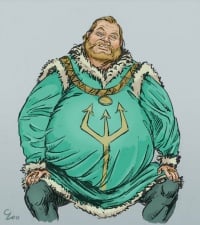 The maester tells Bran he was right to defend Hodor, but it should not have been necessary to fetch him to meet Lord Wyman. Bran apologizes and asks if they will talk of the war. Luwin reminds Bran that he is only eight and should not speak unless spoken to. Inside, Bran is seated in his father's chair with Maester Luwin and Ser Rodrik beside him. The morbidly obese Lord Wyman Manderly is very pleasant, insisting no prince is ever late. He talks about White Harbor being the best place to mint currency and build a fleet for Robb's new kingdom. Talk of warships piques Bran's interest and he thinks it a splendid idea, but no one asks him. The meeting continues through lunch, during which Lord Wyman inquires about his widowed cousin Lady Donella Hornwood, whose husband and only son died on the Green Fork and in the Whispering Wood. He suggests that he would be interested in marrying her, or she could wed his son Ser Wendel. Later, Lord Wyman informs them that Tywin Lannister has offered to ransom his son Ser Wylis (who was taken captive on the Green Fork) if he withdraws his support for King Robb. He has of course refused, but hopes for an equitable prisoner exchange as soon as possible. 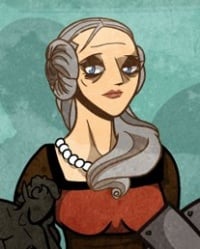 Lady Hornwood arrives during supper, and Bran expresses his condolences to the grief-stricken widow. She thanks them, but asks leave to rest and continue the next day. The next morning's talk is devoted to preparations for the coming winter until Lady Hornwood warns them that Roose Bolton's bastard son Ramsay Snow is massing men at the Dreadfort and refuses to explain his purpose. When Ser Rodrik says he does not know the man, Lady Hornwood explains that Ramsay lived with his mother until Domeric Bolton died and left Roose without an heir. She adds that Ramsay brought along an equally-cruel servant named Reek who is said to never bathe. The two hunt together, and not for deer, and there are other tales that are hard to believe even of a Bolton.

Lady Hornwood fears Ramsay covets her lands now that her husband and son are gone. Bran wants to give her a hundred men, but Ser Rodrik only promises to protect her lands and adds that in time it may be prudent for her to wed again. She remarks that she is beyond childbearing age yet attracts more suitors than ever. She promises to marry if commanded, but there is no one to her liking. She points out that Lord Manderly is too big to share a bed with or lie underneath; Bran knows that men sleep on top of their wives, and imagines sleeping under Lord Wyman would be like sleeping under a horse. Ser Rodrik sympathizes and promises to look for a suitor more to Lady Hornwood's taste, at which point she hints interest in Ser Rodrik himself.

After she leaves, Maester Luwin points out Lady Hornwood's hint, which makes Ser Rodrik uncomfortable. Bran notes that she is sad; Ser Rodrik adds that she is also gentle and not unattractive, but still a threat to the realm. Bran is incredulous, but the maester explains that without a direct heir there will be many claims to her lands, which Robb must adjudicate as the liege lord. When Bran suggests Ser Rodrik, the old castellan replies that he is only a knight and too old; when he dies the problem would resurface. Thinking of his own half-brother, Bran next suggests Lord Hornwood's twelve-year-old bastard Larence Snow. Ser Rodrik doubts that will please Lady Hornwood, but Maester Luwin insists they consider it.

Bran asks to be excused and Ser Rodrik agrees, saying he did well. There are still a few hours of daylight, so Bran goes to the godswood to visit Summer. He has Hodor take him to his favorite place by the pool near the heart tree. Suddenly, a naked Osha explodes out of the cold pool, startling everyone. When Bran asks about the cold, Osha says she likes it. She notices Bran staring at her and asks if he has never seen a naked woman. Bran has bathed with his sisters and seen serving women bathing, but Osha is hard and covered in scars, which she tells him were earned fighting men, mostly Night's Watch; she even killed one. Then she mentions overhearing that the Walders mocked Hodor. Bran recalls that Hodor never fights and says that Septon Chayle says Hodor has a gentle spirit. Osha replies that Little Walder is well named: big outside, little inside, and mean to the bones. Then she asks if Bran has had any more wolf dreams. When he say no, Osha declares a prince should lie better and begs his leave before hurrying back to the kitchens. 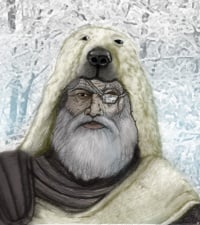 That night, Bran dreams of a weirwood calling to him and a three-eyed crow pecking at his face. He wakes to clamor of the arrival of the Umbers from beyond the Last River. The next day, he greets their leaders, two of Greatjon Umber's uncles: Mors Umber (known as "Crowfood" because he lost an eye to a crow that thought him dead), and Hother Umber (known as "Whoresbane" for reasons no one will tell Bran). Mors immediately asks to wed Lady Hornwood; Luwin and Rodrik explain she is grieving but promise to consider it. Hother asks for longships to stop wildling raids across the Bay of Seals; Ser Rodrik recommends Hothor cooperate with Lord Manderly to provide lumber and receive shipwrights and sailors.

During the audience, the steward of Deepwood Motte arrives with apologies from Lady Sybelle Glover, who is tending to her young children. Bran quickly realizes the steward is the true ruler while Lord Galbart Glover and his brother Robett Glover are away fighting. After discussing the harvest, Ser Rodrik questions the steward about Larence Snow, and afterward Maester Luwin praises Bran's notion of making the bastard heir to Hornwood and says he will make a good lord for Winterfell one day. Bran protests that Robb's sons with his Frey girl will be lords instead of him, but Ser Rodrik points out that nothing is certain; he has only his daughter Beth despite three marriages, and his brother Martyn Cassel's line died with his son Jory despite having four sons.

The next day, Leobald Tallhart from Torrhen's Square, who arrived the day before, has his audience. He brings word that his nephew Benfred Tallhart is raising his own company of young lancers who all think themselves another young wolf; Leobald dismissed them as young rabbits once, so now they call themselves the Wild Hares. Bran remembers Benfred visiting Winterfell and being friendly with Robb and Theon Greyjoy. Clearly displeased, Ser Rodrik orders that Benfred is to remain at Torrhen's Square as commanded. Then Leobald mentions that his own wife Berena was sister to Lord Halys Hornwood and suggests sending his younger son Beren to foster with Lady Hornwood, saying he may even take up the Hornwood name if made heir. Bran has learned the proper answer and promises to bring up the matter with Robb and Lady Hornwood. After the audience, Maester Luwin states that he likes the idea, but Ser Rodrik thinks it will be hard for a boy to hold the lands. Luwin admits that with the Riverlands now part of the kingdom, it may be best to wed her to one of the lords of the Trident.

In the days that follow, ravens arrive with regrets from the other Houses. The bastard Ramsay Snow will not be joining them, the Mormonts and Karstarks have all gone south, Lord Ondrew Locke is too old, Lady Lyessa Flint is too pregnant, and there is sickness at Widow's Watch. That leaves just Lord Howland Reed, who has not left his swamps in sixteen years, and the House Cerwyn, whose Lord Medger Cerwyn is a captive of the Lannisters.

Then, one blustery day, fourteen-year-old Cley Cerwyn arrives with a dozen lancers while Bran is riding Dancer in the yard. Cley has always been a friend to Bran and his brothers and he immediately asks if Stannis Baratheon wrote Winterfell about Joffrey Baratheon being illborn. Bran suddenly feels like a giant hand is crushing his chest. When Cley asks if he is alright, Bran declares that Robb will beat Stannis, too. That night he does not have the dreamless sleep he prayed for. The three-eyed crow pecks out his eyes, telling him to fly. Then the crow pecks his brow until it pecks through his skull and then, suddenly, Bran can see again. He is climbing to a tower, slipping. He calls for help and a golden man appears above him, saying, "The things I do for love," and then tossing him out into empty air.