Howland Reed is the Lord of Greywater Watch and head of House Reed,[5] holding dominion over the crannogmen of the Neck.[6] Howland's children with his wife Jyana are Meera and Jojen, and he is a close friend of Lord Eddard Stark of Winterfell.[7] In the television adaptation Game of Thrones, Howland is played by Leo Woodruff during flashbacks in Season 6.

Howland is a small man,[8] like all crannogmen. Has been described by his daughter, Meera Reed, as having been brave, strong, and smart in his youth.[1]

Young Howland wore a shirt of bronze scales and wielded a three-pronged spear and a leather shield.[1]

According to a tale told by his daughter Meera, Howland grew up hunting, fishing, climbing trees, and learning the magic of the crannogmen.[1]

Isle of Faces and Harrenhal

After he reached the age of majority, bold Howland sought additional knowledge. He paddled a small skin boat down the Green Fork, evaded the Twins at night, and visited the Isle of Faces in search of the green men. He stayed at the island all winter.[1]

Howland left the Isle of Faces in 281 AC, the year of the false spring, to observe the great tourney at Harrenhal held by Lord Walter Whent. As Howland walked across the tourney field, he was attacked by three squires, younger but taller. Lyanna Stark came to his rescue, however, as the crannogman was a vassal of her father, Lord Rickard Stark of Winterfell, and the girl chased the three squires away with a tourney sword.[1] Afterwards, she brought him to her tent, where he was introduced to her three brothers, Brandon, Eddard, and Benjen. Lyanna insisted he attend the feast held that evening at Harrenhal to mark the start of the tourney, and so Howland accompanied the four Stark siblings. When they recognized the three squires who had attacked him earlier, Benjen offered to find Howland a horse and armor to he could avenge himself, but Howland gave no answer. Although he wanted to take revenge, he feared making a fool of himself as he was no knight. Howland prayed at the Gods Eye to the old gods and was given a place in Eddard's tent for the night.[1]

The abduction of Lyanna Stark by Prince Rhaegar Targaryen led to the imprisonment and executions of Lord Rickard and Brandon Stark by King Aerys II Targaryen. Howland joined the northern host during the ensuing war, Robert's Rebellion,[10] and was one of Lord Eddard Stark's staunch companions.[7] After the Sack of King's Landing and the siege of Storm's End, Howland and five other northmen accompanied Ned Stark south to the Red Mountains in search of Lyanna.[8] Howland and Eddard were the only survivors of the combat at the tower of joy between the seven northmen and three knights of the Kingsguard.[8] Ned later told his second son, Bran Stark, that Howland had saved his life from Ser Arthur Dayne.[7] Eddard found Lyanna and was with his sister when she died. Howland was among those who found Ned, still holding Lyanna, silent with grief, and he was the person who took Lyanna's hand from Eddard's.[11]

Howland returned to the north and has not departed the swamps of the Neck since.[4] Lord Eddard Stark has periodically sent letters to his friend, but Bran cannot recall crannogmen having visited Winterfell.[7] Howland taught net-fighting to his daughter, Meera Reed.[12] It is unknown when Howland became Lord of Greywater Watch, whether before or after Robert's Rebellion. 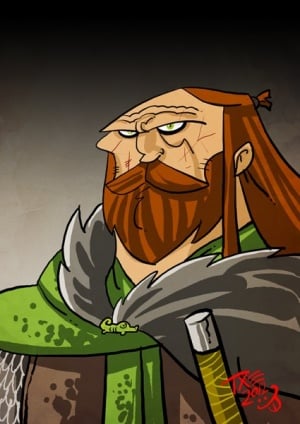 Having called the northern banners to rescue his father, Lord Eddard Stark, from King's Landing, Robb Stark sends word to Howland to have the crannogmen bleed the Lannisters if they march up the causeway through the Neck.[6] After Eddard's execution by order of King Joffrey I Baratheon, Robb is proclaimed King in the North at Riverrun.[13]

Upon learning his son Jojen had a green dream of a winged wolf, Howland sends his children from Greywater Watch to Winterfell.[12] Jojen and his elder sister, Meera, recite an oath of fealty to Robb's younger brother, Prince Bran Stark, during the harvest feast.[7]

After the capture of Winterfell, Theon Greyjoy intends to hold Meera and Jojen as hostages to prevent Howland from attacking the ironborn of Lord Captain Victarion Greyjoy at Moat Cailin.[14] The Reed children escape from Theon, however, and hide in the crypt of Winterfell.[15]

At Hag's Mire, King Robb tasks Galbart Glover and Maege Mormont with sailing into the Neck to inform Howland of his plan to recover Moat Cailin from Victarion's ironborn.[16] Robb is killed in the Red Wedding before the plan can be put into action, however.[17]

Attacks by crannogmen weaken the ironborn garrison at Moat Cailin.[18][19]

Outlaws led by Lady Stoneheart are said to have vanished into the Neck, with Ser Danwell Frey thinking they are being sheltered by crannogmen.[20]

Theon resolves the siege of Moat Cailin, with the meager ironborn garrison surrendering to Ramsay Bolton.[21] Lord Roose Bolton utilizes a decoy in case of an assassination attempt by crannogmen.[21]

Howland Reed was a great friend to your father.[7]

The finest knight I ever saw was Ser Arthur Dayne, who fought with a blade called Dawn, forged from the heart of a fallen star. They called him the Sword of the Morning, and he would have killed me but for Howland Reed.[7]

My father knew the worth of Howland Reed.[16]

Bran: Did he have green dreams like Jojen?
Meera: No, but he could breathe mud and run on leaves, and change earth to water and water to earth with no more than a whispered word. He could talk to trees and weave words and make castles appear and disappear.[1]

George R. R. Martin has stated that Howland would not be a POV character because he knows too much.[22]