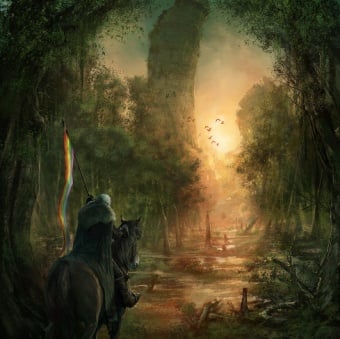 The causeway is the only dry road through the Neck and forms part of the kingsroad in the North. The road rests on a raised embankment which provides the only navigable passage through the bogs and the only safe route for armies to travel through the swamps of the Neck.

East of the road is a bleak and barren shore and the cold salt sea of the Bite, while to the west are the swamps and bogs of the Neck, impassible and quite deadly. The three remaining towers of Moat Cailin plug the northern end of the causeway like a cork in a bottle. The road is narrow and the ruins are positioned so that any enemy coming up from the south must pass beneath and between them.[1] Even a small garrison at Moat Cailin can play havoc with any army coming up the causeway.

The army of Robb Stark marches south along the causeway to rescue Lord Eddard Stark.

Lord Roose Bolton leads an army of mostly Freys and Boltons north on the causeway to Moat Cailin.