Bear Island
The north and the location of Bear Island

Bear Island is a remote island in the north that is home to House Mormont. It lies within the Bay of Ice, north of Deepwood Motte and south of the Frozen Shore.[1] The Mormonts live at Mormont Keep.[2] 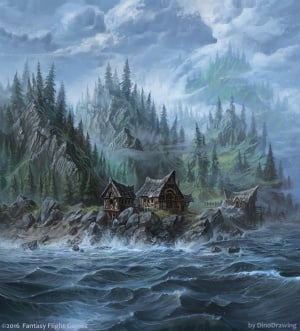 The beautiful but remote island contains old gnarled oaks, tall pines, flowering thornbushes, moss-covered grey stones, and steep hills with streams.[3] It is the home to many bears.[3]

According to a semi-canon source, House Hoare added a green tree in the second quarter of their sigil as a reference to their one-time possession of Bear Island.[4]

Aside from a few crofters, the inhabitants of Bear Island live along the coasts and fish the seas.[3] In days past, ironborn and free folk from the Frozen Shore raided Bear Island while the men were fishing, leaving the defense of the island to its women. This created a warrior culture among the women.[5] 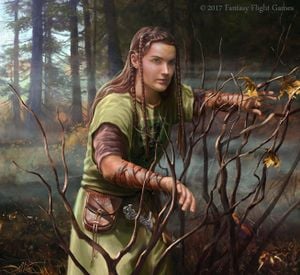 Bear Island has long been disputed by the north and the Iron Islands.[6][7] Thousands of years ago,[8] Bear Island was ruled by House Woodfoot prior to its conquest by the ironborn.[9] The ironmen of antiquity controlled the Sunset Sea from Bear Island and the Frozen Shore as far south as the Arbor.[7]

The island was used as a reaving base by Ravos Hoare, the son of Harrag Hoare, King of the Iron Islands. Theon Stark, a King in the North, drove the ironborn from Bear Island during his reign, slaying Ravos himself.[10]

The driftwood king Loron Greyjoy retook Bear Island, but it was again lost to the ironborn after the Old Kraken's death. King Rodrik Stark is said to have won the island in a wrestling match and granted it to House Mormont,[11] although some scholars are skeptical of the story.[6] This presumably occurred in the century after Gerold Lannister, King of the Rock, raided the Iron Islands, when weaker driftwood kings lost most ironborn possessions along western Westeros.[12]

Lord Torrhen Stark sent a few longships from Bear Island to aid King Aegon I Targaryen in his campaign against the Iron Islands.[13]

Elissa Farman sailed as far as Bear Island and the Arbor by the age of twenty.[14]

Lord Jeor Mormont joined the Night's Watch to allow his son, Jorah Mormont, to rule Bear Island. Jorah ruled the island with his wife, Lynesse Hightower, but she decided that the remote isle was no place for a Hightower of Oldtown. After Jorah was caught selling poachers to a slaver to support Lynesse's lifestyle,[3] Eddard Stark, the liege lord of the north, traveled to Bear Island to execute Jorah or force him to take the black. However, the disgraced Jorah had already taken ship into exile with his wife by the time Ned arrived.[15] Bear Island thus passed to Jeor's sister, Lady Maege Mormont.[16] 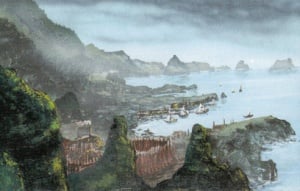 Lady Maege Mormont leads the levy from Bear Island that joins the army of Robb Stark.[17] She is accompanied by three of her daughters, Dacey, Lyra, and Jorelle.[18]

Daenerys Targaryen intends to restore Bear Island to the exiled Ser Jorah Mormont if she gains the Iron Throne.[3]

Robb, King in the North, sends Maege into the Neck to find Lord Howland Reed. In case of capture, Maege is to claim to be returning to Bear Island.[5] Dacey, the heir to Bear Island, is killed alongside Robb in the Red Wedding.[19]

Maester Aemon sends a raven to Bear Island, in a plea for help defending Castle Black from wildlings.[20]

The Mormonts of Bear Island were an old house, proud and honorable, but their lands were cold and distant and poor.[15]

Bear Island is rich in bears and trees, and poor in aught else.[3]

She had heard the longing in Ser Jorah's voice when he spoke of his Bear Island. He can never have me, but one day I can give him back his home and honor.[3]

Dany pictured Jorah moving amongst old gnarled oaks and tall pines, past flowering thornbushes, grey stones bearded with moss, and little creeks running icy down steep hillsides. She saw him entering a hall built of huge logs, where dogs slept by the hearth and the smell of meat and mead hung thick in the smoky air.[23]

Bear Island knows no king but the King in the North, whose name is STARK.[21]

Asha: Mormont women are all fighters too.
Alysane: What we are is what you made us. On Bear Island every child learns to fear krakens rising from the sea.[18]