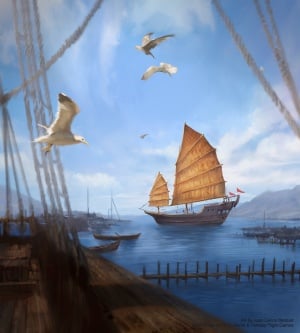 The Summer Sea is a body of water located south of Westeros and Essos.[1] The southern sea has deep blue waters and is warm from the sun.[2] 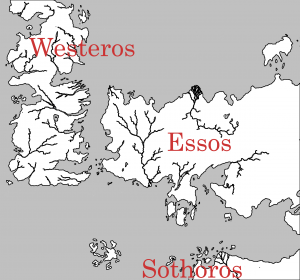 The Summer Sea is located between Westeros, Essos, and Sothoryos.

The Arbor and the Redwyne Straits are found off the southwestern coast of Westeros, between the Summer and Sunset Seas. Also in the southern Reach is Sunhouse. Places along the southern coast of Dorne include Starfall, Salt Shore, Lemonwood, Sunspear, and the Water Gardens. Dornish rivers flowing into the Summer Sea include the Torentine, the Brimstone, and the Greenblood.[4]

During autumn, fierce storms arise in the warm Summer Sea and head north to the narrow sea and the stormlands.[5]

Just east of Dorne, the Summer Sea is separated from the narrow sea to the north by the island chain known as the Stepstones. South of Westeros and the Stepstones are the Summer Isles, east of which are Naath and the Basilisk Isles.[1] It is unknown how far south the western Summer Sea extends. Explorers from the Summer Isles may have charted the southern sea, but they are protective of their findings.[6]

South of the Basilisk Isles is the continent of Sothoryos, with Basilisk Point and Wyvern Point. The ruins of Zamettar are located at the mouth of the Zamoyos, and the ruins of Gorosh are also found in northern Sothoryos.[1]

East of Westeros and north of Sothoryos is the continent of Essos. The island city of Lys is found in the Summer Sea south of the Disputed Lands. East of the Orange Shore is the mouth of the Rhoyne with the ruins of Sarhoy and the city of Volantis,[7] and then further east are the Smoking Sea and the ruined Valyrian peninsula.[8]

East of the peninsula is the Isle of Cedars, with Slaver's Bay to the north and the Gulf of Grief at the south. Continuing east along the Summer Sea is Old Ghis in Ghiscar, and then New Ghis and Ghaen are separated from the mainland by the Ghiscari Strait.[8]

East of Ghiscar is the red waste, with Port Yhos and Qarth being found on the Summer Sea. Also on the southern coast are the ruins of Vaes Orvik and Qarkash.[8]

The eastern Summer Sea ends at the isle of Great Moraq, near which are Vahar and Lesser Moraq. North of Great Moraq are the Jade Gates and Qarth, while south of the great isle are the Cinnamon Straits. East of Great Moraq is the Jade Sea.[8][9] 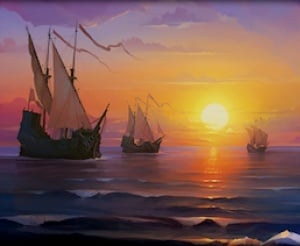 The Summer Sea was once separated from the narrow sea by the Arm of Dorne. The Breaking led to the Broken Arm, the Stepstones, and the Disputed Lands.[10]

The Old Empire of Ghis founded colonies in the Basilisk Isles and Sothoryos, but the Ghiscari were conquered by the Valyrian Freehold during the Ghiscari wars.[11][6] Braavos was founded after a fleet with slaves, taken from the Summer and Jade Seas and intended to work a Valyrian colony in Sothoryos, was taken in an uprising.[12][13]

Sarhoy on the Summer Sea was destroyed by Volantis and Valyrian dragonlords during the Second Spice War. According to legend, Nymeria then led the exodus of the Rhoynar on ten thousand ships. They traveled to the Basilisk Isles, Sothoryos, Naath, the Summer Isles, and finally Dorne.[14]

In the aftermath of the Doom of Valyria, the Free City of Volantis considers itself the mistress of the Summer Sea.[15]

In 54 AC, Elissa Farman, Ser Eustace Hightower, and Ser Norman Hightower, sailed from Oldtown to explore the Summer and Sunset Seas. Norman's Autumn Moon went down in a storm, but Elissa's Sun Chaser found three islands. Elissa continued west to an unknown fate. Eustace's Lady Meredith was damaged by a pod of leviathans while returning home. The ship headed for the Summer Isles, but sailed off course and landed at Sothoryos. Eustace eventually reached Tall Trees Town and then Oldtown with the aid of Summer Islanders.[16][17] 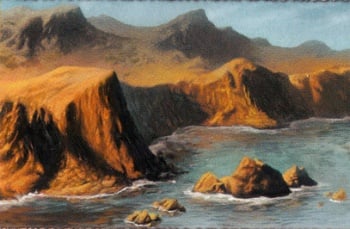 Samwell Tarly sails on Cinnamon Wind along the southern coast of Dorne to Oldtown.[18]

Leading the Iron Fleet to Slaver's Bay, Lord Captain Victarion Greyjoy divides his fleet into three squadrons at the Stepstones.[19]

And where to find provisions for so many mouths? No port wants so many warships in their waters. The storms would have scattered us, in any case. Like leaves strewn across the Summer Sea.[19]