From A Wiki of Ice and Fire
Jump to: navigation, search
For others with the same name, see Nymeria (disambiguation).

Princess Nymeria of Ny Sar was a princess of the Rhoynar. After the Rhoyne was conquered by the Valyrian Freehold, Nymeria led the Rhoynar to Dorne, where she took Lord Mors Martell of the Sandship as her husband.[1]

After years of war and conquest, House Nymeros Martell established supremacy over Dorne, with Nymeria ruling for well over two decades as the Princess of Dorne. Through Nymeria's rule, the Dornish adopted many Rhoynish customs and laws that remain to this day.[1]

Princess Nymeria was said to be beautiful.[2]

Described by Maester Yandel as strong-willed and indomitable, Princess Nymeria was said to have cunning, skill, and wisdom.[1] Though Nymeria is remembered as a "warrior queen", and in songs is said to have been a witch, neither statement is true. While she did not bear arms in battle, Nymeria commanded her armies, leading them on the battlefield.[1]

At the time of the Rhoynish Wars, Nymeria ruled in Ny Sar, where she had a palace.[3]

During the Second Spice War, Prince Garin of Chroyane united the Rhoynar nobility in a grand alliance against the Valyrian Freehold. Only Princess Nymeria spoke against him, warning the other princes that they could not win the war. However, the other princes shouted her down and joined their strength to Prince Garin, and even Nymeria's own warriors were eager to join his cause. Despite her own reluctance, Nymeria found herself forced to join the great alliance.[2]

Despite Prince Garin's initial success against the Freehold, the Valyrians responded by sending three hundred dragons against the Rhoynar. Garin's host was shattered and the prince was captured. Upriver at Ny Sar, Princess Nymeria learned of Garin's defeat and the enslavement of her people, and she knew that her city awaited the same fate. In response, she gathered every ship that remained upon the Rhoyne and filled them with as many women and children as they could carry—most of the men had perished alongside Garin's host.[2] 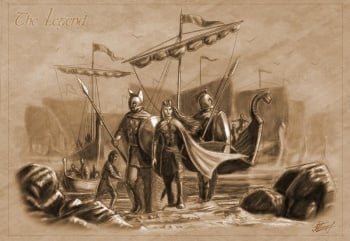 While legends often claim that Nymeria commanded a fleet of ten thousand ships, Beldecar argues in his History of the Rhoynish Wars that the number was inflated, perhaps by tenfold. While other chroniclers offer other numbers, in truth no count was ever made. Maester Yandel agrees that Nymeria led a great many ships, mostly river craft, skiffs, poleboats, trading galleys, fishing boats, rafts, and pleasure barges, crammed with women, children, and old men. Only one in ten was seaworthy, Beldecar insists.[2]

Nymeria led her ragged fleet down the Rhoyne, past ruined towns and fields of corpses. To avoid Volantis and the dragonlords, Nymeria chose an older channel and emerged into the Summer Sea where the city of Sarhoy once stood. The following voyage was long and terrible, and more than a hundred ships sank in the first storm they encountered. As many or more were taken by fear and turned back, only to be captured by slavers out of Volantis. Others fell behind or drifted away, and were never seen again.[2]

Nymeria's fleet first limped to the Basilisk Isles, where they paused to take on fresh water and provisions, only to be descended upon by local pirate kings. The corsairs offered to allow the Rhoynar to settle on the Isle of Toads in exchange for their ships and thirty virgins each year for each king as tribute, Nymeria refused this offer. She took her fleet to sea again, hoping to find refuge on Sothoryos. Nymeria settled at Zamettar, while others settled at Yeen or founded new towns. However, the Rhoynar did not thrive, succumbing to disease, the dangers of the jungles, attacks from slavers, and the native population. After two new towns were sacked by slavers and the Rhoynar settled in Yeen vanished, Nymeria summoned her people back to their ships and they set sail once again.[2]

For three years, Nymeria's fleet wandered the southern seas. The Rhoynar attempted to settle in Naath where they were welcomed by its peaceful people, but they were soon driven off by disease.[2] In the Summer Isles, the Rhoynar settled on the uninhabited so-called "Isle of Women" for more than two years.[2][4][5] The princes of the isles refused to allow them to settle on the larger islands, fearing the wrath of the Freehold.[4] However, many soon starved for the island was poorly soiled and yielded little food,[2] and disease and slavers took their toll.[4] Some of the Rhoynar abandoned Nymeria to follow a priestess named Druselka to return to their cities along the Rhoyne, only to be enslaved or slain by their enemies. Finally, Nymeria turned west and the remnants of her fleet settled in the deserts of Dorne on Westeros; the less seaworthy ships settled the Stepstones or gave themselves up to slavers of the Free Cities.[2] Nymeria and her ships finally made landfall on the coast of Dorne, near the mouth of the river Greenblood, not far from the Sandship, the ancient seat of House Martell.[2][6] 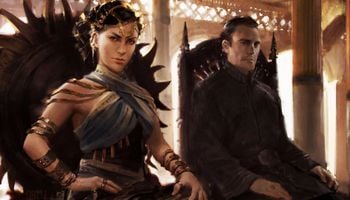 Princess Nymeria and Prince Mors Martell, art by Karla Ortiz for The World of Ice & Fire

At the time of Nymeria's arrival, Dorne was a poor land where a score of lords and petty kings quarreled over rivers, wells, and fertile water. Many viewed the Rhoynar as unwelcome invaders who should be driven back into the sea. However, Lord Mors Martell of the Sandship saw an opportunity in the Rhoynar—and singers claim that Lord Martell also lost his heart to the beautiful princess. With many trained in warfare, the Rhoynar added their strength to Lord Martell's own, increasing his host by tenfold. Mors married Nymeria, and hundreds of his knights, squires, and bannermen wed Rhoynish women, uniting the two people by blood. The Rhoynar also brought considerable wealth with them and their artisans and armorers' skills were far more advanced than those of their Westerosi counterparts.[2]

To celebrate these unions and to ensure that her people could not retreat to the sea again, Nymeria burned her fleet, declaring her wanderings to be at an end,[2][7][8] though some of her people mourned the loss of their ships. Nymeria named her husband the Prince of Dorne, declaring his dominion over all of Dorne. However, such supremacy was not an easy feat and years of war followed, called Nymeria's War. The Rhoynar and the Martells subdued one petty king after another, and no fewer than six kings were sent to the Wall to join the Night's Watch by Nymeria and her husband.[2][9] Soon, only King Yorick V Yronwood remained, the greatest of the Dornish kings.[2]

For nine years, Nymeria and the Martells battled against Yronwood and his bannermen. When her husband fell to Yronwood's sword in the Third Battle of the Boneway, Nymeria assumed sole command of the Martell armies. Two more years of battle followed, but Nymeria eventually defeated Yorick V and he bent the knee to her, ensuring Martell supremacy. Nymeria ruled thereafter from Sunspear, the new seat of House Martell built around Sandship.[2][10]

As the Princess of Dorne, Nymeria remained the unquestioned ruler of Dorne for almost twenty-seven years.[2] Dorne was established as a principality, not a kingdom, for Nymeria preferred the Rhoynish style of prince and princess.[1] Though she remarried twice to Lord Uller of Hellholt and Ser Davos Dayne of Starfall, her husbands served only as counselors and consorts.[2]

Over the course of her long reign, Nymeria survived a dozen assassination attempts, quelled two rebellions, and threw back two invasions by the Storm King, Durran the Third, and one by King Greydon Gardener of the Reach.[2] As Nymeria grew aged and infirm, the armies of House Martell were commanded by her heirs.[1] When she at last died, Nymeria was succeeded as Princess of Dorne by her eldest daughter by Lord Mors, not by her only son by Ser Davos, for Dorne had come to adopt many of the laws and customs of the Rhoynar.[2] 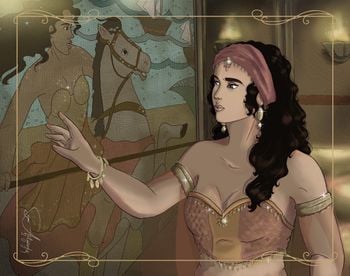 Princess Arianne Martell views a mosaic of Nymeria and her ten thousand ships, by Samantha Altarozzi ©

Arya Stark names her direwolf "Nymeria" after the legendary queen.[6]

When taken into the service of Lord Roose Bolton at Harrenhal, Arya Stark claims her name is "Nymeria", shortened to "Nan".[12]

When Arya Stark and the kindly man devise an origin for her new identity "Cat", Arya chooses the name Nymeria for the ship that allegedly brought Cat to Braavos.[15]

Nymeria was first married to Lord Mors Martell of the Sandship, whom she styled as the Prince of Dorne. By Lord Martell, Nymeria had four daughters. After his death in battle, Nymeria remarried to the aged Lord Uller of Hellholt, though the marriage was childless. After Lord Uller passed away, she remarried again to the dashing Ser Davos Dayne, the Sword of the Morning. By him, she had one son.[2]

As the Dornish adopted the succession customs of the Rhoynar, Nymeria was succeeded as Princess of Dorne by her eldest daughter by Lord Mors, rather than her son by Ser Davos.[2]

That is Nymeria's star, burning bright, and that milky band behind her, those are ten thousand ships. She burned as bright as any man, and so shall I.[14]

Nymeria's blood is in me, along with that of Mors Martell, the Dornish lord she married.[14]

We will build ten thousand ships as Nymeria once did and take sail with all our people to the land beyond the sunset.[16]

—Gylbert Farwynd, at the kingsmoot