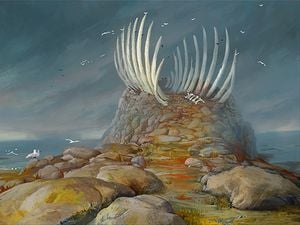 A kingsmoot on Old Wyk[1] is a council held by the ironborn on the holy isle to choose a new King of the Isles and the North in 300 AC.

Theon Greyjoy, Balon's surviving son, styles himself Prince of Winterfell,[2] but he disappears after the sack of Winterfell.[5] Theon is feared dead after his sister, Asha Greyjoy, unsuccessfully searches for him in the ruins of Winterfell.[6] Unbeknownst to House Greyjoy, Theon has been taken by Ramsay Snow to the dungeons of the Dreadfort.[7] 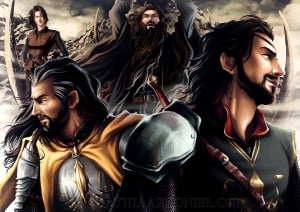 King Balon falls to his death while crossing one of the bridges of Pyke.[8] Shortly afterward, his younger brother, Euron Greyjoy, returns from exile and claims the Seastone Chair in Pyke. Lord Sawane Botley objects to Euron's actions, so Euron has Sawane drowned in a cask of seawater.[8]

Balon's youngest brother, Aeron Greyjoy, learns of the king's death while initiating drowned men on Great Wyk. Considering Euron to be a godless man unworthy of sitting the Seastone Chair, Aeron Damphair calls for a kingsmoot to choose the new king to be held on the holy isle of Old Wyk,[9] as Nagga's Hill was where the High Kings of the Iron Islands were chosen in antiquity.[10] Aeron's fellow priests of the Drowned God spread word across the Iron Islands.[6]

After hearing of Balon's death, Robb Stark plans a siege of Moat Cailin.[8]

Victarion Greyjoy sails to Nagga's Cradle with most of the Iron Fleet, leaving a small force behind at the Fever River.[11] Men from every isle sail to Old Wyk for the kingsmoot; Victarion sees a multitude of ships along the strand. Victarion provides a feast for half a hundred famous captains on the night before the kingsmoot. Asha offers to share rule with her uncle and serve as his Hand of the King, but Victarion declines.[11]

Euron Greyjoy at the kingsmoot, by zippo514 ©

Aeron Damphair leads the ceremonial council at the ruined bones of the Grey King's Hall on Nagga's Hill. Commoners crowd together at the knoll's base, with thralls, women, and children behind them. As the captains make their way up the slope, and each candidate who desires to be king is supported by three champions.[12]

Gylbert Farwynd, Lord of the Lonely Light, comes first as a candidate, with his three sons Gyles, Ygon, and Yohn as his champions. Gylbert promises the ironborn that if he becomes king he will lead them to a new bountiful land across the Sunset Sea, as Nymeria did with her ten thousand ships. His gifts are whale bone, sealskins, and bronze.[12]

Erik Ironmaker is carried on a carved driftwood chair by three of his grandsons, Dagon, Thormor, and Urek. His gifts are silver, bronze, and a few steel daggers and blades. Asha humiliates Erik by asking him to stand on his own two feet, which the elderly man is unable to do.[12]

Dunstan Drumm, Lord of Old Wyk, comes next. His champions are his sons Donnel and Denys, as well as Andrik the Unsmiling. Dunstan's speech starts well but he talks too long and soon loses the interest of the crowd. His gifts of bronze do not win them back to him.[12]

Victarion Greyjoy comes next with Nute the Barber, Ralf the Limper, and Red Ralf Stonehouse as his champions. He is well received and his gifts of gold, silver, and gems add to his supporters.[12]

Asha Greyjoy comes next with Qarl the Maid, Tristifer Botley, and Ser Harras Harlaw as her champions. She does better than anyone expected. Unlike the rest, her gifts are cobblestones, pinecones, and turnips. She shows the ironborn these gifts to demonstrate that this is what they have won so far by fighting the north, losing fathers and sons for these "treasures". Asha offers them a chance for land at Sea Dragon Point and the Stony Shore and peace with the northmen. She wins much support, but many still support Victarion and the two factions begin to squabble.[12]

Euron Greyjoy has one of his men, Cragorn, blow a piercing black horn, which silences the fighting. Euron then steps forward and claims the horn they heard can bind dragons to his will, and that he knows where to locate three of the creatures. He promises to use them so the ironborn can conquer all of Westeros.[12] Euron's men then pour forward his gifts, including: gold, silver, armor, curved swords with gilded pommels, daggers of Valyrian steel, pelts of tigers and spotted cats, jade manticores and sphinxes from Valyria, chests of nutmeg, cloves, and saffron, ivory tusks and the horns of unicorns, feathers from the Summer Sea, and bolts of silk and samite.[13] Euron is enthusiastically chosen by the assembled captains.[12]

As Euron Greyjoy's followers celebrate his selection, Asha Greyjoy flees Old Wyk on Black Wind as her uncle, Rodrik Harlaw, fears that Euron will kill her or force her to wed.[14] While at Ten Towers, Asha learns that Euron has wed her to Erik Ironmaker, with a seal standing in as her substitute.[14] At Deepwood Motte, Tristifer Botley tells Asha the tale of Torgon Greyiron, explaining that the absence of Torgon the Latecomer was used to denounce the kingsmoot of Urrathon IV Goodbrother as unlawful.[14]

Baelor Blacktyde refuses to recognize Euron as king. When he attempts to return to Blacktyde, however, Baelor is caught by the Iron Fleet in Nagga's Cradle and delivered to Euron. The new king has the Lord of Blacktyde cut into seven body parts.[13]

Upset at their brother's victory, Aeron Greyjoy tells Victarion that he will raise the smallfolk of the Iron Islands against the new king. The Damphair disappears from Old Wyk,[13] however, and Erik persecutes drowned men and priests of the Drowned God.[14]

Euron sails with the loyal ironborn and the Iron Fleet against the Reach, beginning with the taking of the Shields.[13] Erik remains behind to serve as Lord Steward of the Iron Islands.[15] 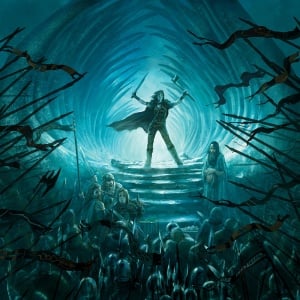 Asha Greyjoy at the kingsmoot, by Marc Simonetti ©

Seek the hill of Nagga and the bones of the Grey King's Hall, for in that holy place when the moon has drowned and come again we shall make ourselves a worthy king, a godly king. Listen! Listen to the waves! Listen to the god! He is speaking to us, and he says, We shall have no king but from the kingsmoot![9]

—Aeron Greyjoy to the drowned men

The Drowned God must have shoved a pricklefish up Uncle Aeron's arse. A kingsmoot? Is this some jape, or does he mean it truly?[6]

Balon is dead ... but an iron king shall rise again, to sit upon the Seastone Chair and rule the isles.[12]

—Aeron Greyjoy to the attendees

Peace. Land. Victory. I'll give you Sea Dragon Point and the Stony Shore, black earth and tall trees and stones enough for every younger son to build a hall. We'll have the northmen too ... as friends, to stand with us against the Iron Throne. Your choice is simple. Crown me, for peace and victory. Or crown my nuncle, for more war and more defeat.[12]

—Asha Greyjoy to the attendees

We are the ironborn, and once we were conquerors. Our writ ran everywhere the sound of the waves was heard. My brother would have you be content with the cold and dismal north, my niece with even less ... but I shall give you Lannisport. Highgarden. The Arbor. Oldtown. The riverlands and the Reach, the kingswood and the rainwood, Dorne and the marches, the Mountains of the Moon and the Vale of Arryn, Tarth and the Stepstones. I say we take it all! I say, we take Westeros. All for the greater glory of our Drowned God, to be sure.[12]

—Euron Greyjoy to the attendees