Mountains of the Moon

The Mountains of the Moon are a series of mountains ruled by House Arryn of the Vale. The mountains border the riverlands to the west, the Bite to the north, and the Bay of Crabs to the south, and they surround the Vale proper.[1]

The Mountains of the Moon are bleak and inhospitable.[1] The mountains have snow-capped[2] grey-green peaks.[1] Rock slides are common and its foothills are rocky, high and wild. The high road from the inn at the crossroads passes through the mountains, which are inhabited by mountain clans who reject the authority of the Arryns.[3] Aspens are found in the mountains,[4] and shadowcats hunt in the range's passes.[3]

The Eyrie sits atop the Giant's Lance, with the Gates of the Moon below.[5] Strongsong is located near a group of lakes in the northern mountains, west of Heart's Home, while Wickenden is found in the southern mountains along the Bay of Crabs.[6] The Bloody Gate guards the high road from the Mountains of the Moon to the Vale proper.[1] The western foothills between the mountains and the riverlands have towers of unmortared stone, and some strong points on the high road have earthen walls four feet high.[7] 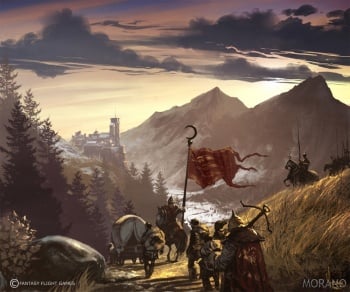 During the coming of the Andals to the Vale, some of the defeated First Men who refused to submit to House Arryn after the Battle of the Seven Stars fled into the Mountains of the Moon, becoming the mountain clans.[1] Wild tribes have sometimes raided the riverlands from the mountains.[8] Etchings of stars and axes by the victorious Andals can also be found in some parts of the mountains.[9]

A dozen armies have attempted to cross the mountains and invade the Vale, but they have all been stopped by the Bloody Gate.[1]

During her search for the missing Aerea Targaryen, Rhaena Targaryen and her dragon, Dreamfyre, were seen flying over the Fingers and the Mountains of the Moon.[10]

Passes through the mountains were closed by snow in 130 AC during the Dance of the Dragons. Lady Jeyne Arryn instead sent men to aid the blacks by sea.[11] Prince Aemond Targaryen attacked Stonyhead in the foothills with Vhagar.[11] Nettles was believed to have flown Sheepstealer to Crackclaw Point or the Mountains of the Moon after fleeing Maidenpool.[12]

Lady Jeyne served in the regency of Aegon III, but she returned to the Vale in 132 AC to deal with clansmen raiding from the mountains.[13] A war of succession broke out after Jeyne's death, with Ser Robert Rowan leading a royal host in support of Jeyne's chosen heir, Ser Joffrey Arryn. Robert's host was slowed by deep snow, however, and their baggage train was attacked by clansmen. Some of Robert's men encountered Sheepstealer in a cave, and in later years the Burned Men are said to have worshipped a "fire witch" in a hidden vale.[14][1] A third of the royal host, including Robert, was lost reaching the Bloody Gate, forcing Lord Benjicot Blackwood to take command.[14] Septon Bernard blamed the deaths of thousands in the mountains on Robert's father, Lord Thaddeus Rowan.[14]

At the start of Robert's Rebellion, Lord Eddard Stark traveled from the Eyrie through the Mountains of the Moon to the Fingers, where he took ship for the north.[15] 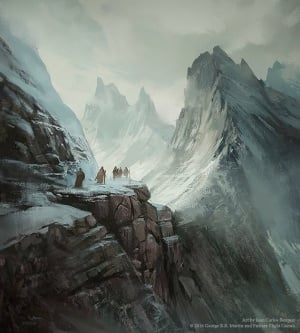 After abducting Tyrion Lannister at the crossroads inn, Catelyn Stark brings him to the Eyrie by taking the high road through the Mountains of the Moon. They survive an attack by mountain clansmen.[2][5]

Following Bronn's victory on Tyrion's behalf in trial by combat,[16] Ser Lyn Corbray escorts Tyrion and Bronn to the Bloody Gate, where he commands them never to return to the Vale.[4] The pair are surrounded by clansmen while traveling west, but Tyrion recruits them to fight for House Lannister after promising them the Vale.[4]

Timett leads the Burned Men back to the mountains after the Battle of the Blackwater.[17]

Catelyn writes to her sister, Lady Lysa Arryn, asking her to travel through the mountains and visit their dying father, Lord Hoster Tully, at Riverrun.[18] Robb Stark, King in the North and King of the Trident, asks for his aunt to open the Bloody Gate and let his army return to the north via Gulltown.[19] Lysa does not respond to them, however.[20]

Travel through the Mountains of the Moon is near impossible because of snowfall and raiding by the clans, who are better equipped than usual.[21] Shadowcats prowled those passes, rock slides were common, and the mountain clans were lawless brigands, descending from the heights to rob and kill and melting away like snow whenever the knights rode out from the Vale in search of them. Even Jon Arryn, as great a lord as any the Eyrie had ever known, had always traveled in strength when he crossed the mountains.[3]

Tywin: Even in the west, we know the prowess of the warrior clans of the Mountains of the Moon. What brings you down from your strongholds, my lords?
Shagga: Horses.[7]

Tyrion: Strike at their camps and baggage train. Ambush their scouts and hang the bodies from trees ahead of their line of march, loop around and cut down stragglers. I want night attacks, so many and so sudden that they'll be afraid to sleep—
Shagga: All this I learned from Dolf son of Holger before my beard had grown. This is the way of war in the Mountains of the Moon.[22]

Petyr: My lords, grant me the men, and I will sort out Lysa Arryn.
Mace: Perhaps you'd best leave the fighting to fighters. Better men than you have lost great armies in the Mountains of the Moon, or shattered them against the Bloody Gate.[23]

The way the sun was hitting the mountains made them look like solid gold.[24]