Ser Lyn Corbray is a knight from House Corbray who wields Lady Forlorn, a sword of Valyrian steel. He is the heir of his elder brother, Lord Lyonel Corbray of Heart's Home.[1]

Lyn is a thin man.[4] He is handsome, but vain, reckless and hot-tempered.[5] He has shoulder-length brown hair.[6] Lyn is often short of money.[7] It is said that Lyn is "notoriously" uninterested in women.[5][7] According to Petyr Baelish, Lyn likes "boys".[6] 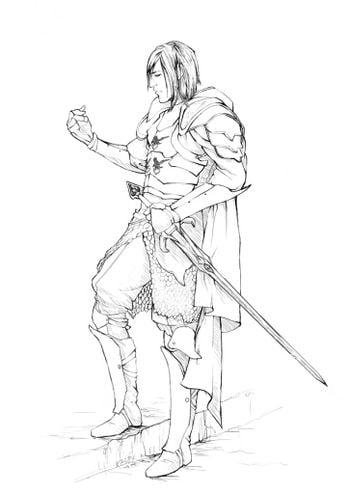 Ser Lyn won his knighthood during Robert's Rebellion.[6] At the start of the war, he fought for House Targaryen with Lord Marq Grafton against Lord Jon Arryn at the gates of Gulltown.[6] Lyn was pardoned, and joined Lord Jon against the Targaryens.[6]

At the Battle of the Trident, Lyn's father was badly wounded. In the confusion, Lyn took up the family's Valyrian steel longsword, Lady Forlorn, and distinguished himself by leading an assault on the Dornish lines. He personally finished off the wounded Prince Lewyn Martell of the Kingsguard.[6]

Honoring Lyn's achievements on the battlefield, his father bequeathed him Lady Forlorn upon his death. His elder brother Lyonel Corbray inherited the rest of the family estate and titles, but still resented the loss of the family blade.[6]

Ser Lyn is one of Lady Lysa Arryn's suitors, after the death of Lord Jon Arryn. His squire is Mychel Redfort. Lyn attends the trial of Tyrion Lannister at the Eyrie. He offers himself as champion of the Vale when Tyrion demands a trial by combat, but is rebuffed by Lysa.[4]

Following Bronn's victory in the trial,[5] Lyn escorts Tyrion and Bronn to the Bloody Gate, where he commands them never to return to the Vale.[8]

Ser Lyn accompanies the Lords Declarant to their parley with Lords Petyr Baelish and Robert Arryn at the Eyrie. Lord Nestor Royce claims that Lyn rarely left the side of Lysa for nearly half a year. During the parley, Ser Lyn grows tired of the conversation and threatens Petyr with his sword, Lady Forlorn, violating the laws of hospitality. Ser Lothor Brune moves to intercept, but it is the intervention of the other Lords Declarant that causes Lyn to put up his sword. Lyn leaves the parley shortly thereafter.[6]

Later, Petyr admits to Sansa Stark that Lyn is in his employ, and it is his task to feign hatred for Petyr and to join every conspiracy against him and inform on them. Petyr states that Lyn's price is gold and boys.[6] 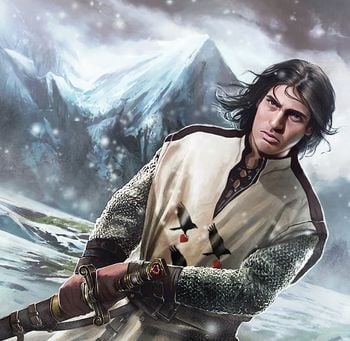 Prior to the tourney for the Brotherhood of Winged Knights at the Gates of the Moon, Ser Lyn knocks down Ser Owen during a practice match. The buxom Myranda Royce japes that Lyn would not be interested in her because of her gender.[7]

My lady has a thirst. Whenever she comes out to dance, she likes a drop of red.[6]

—Lyn to the Lords Declarant

Lyn Corbray is a dangerous man.[9]

While it is mentioned that Lyn likes "boys",[6] the age of these boys is unclear. As such, it is unclear if this is meant to imply that he is a pedophile. When asked about this, Elio Garcia agreed that the currently available information is too little to tell one way or the other, and agreed that "[Lyn being a pedophile is] an assumption without proof, so at least should be qualified".[10]