The Bloody Gate is a series of battlements in the Vale of Arryn. It is located along the high road which leads into the Vale proper from the Mountains of the Moon.[2] It protects against mountain clansmen[3] and invading armies.[2]

The Bloody Gate is located southwest of the Eyrie and northwest of the Redfort.[1] There are two long parapets built into the stone of the Mountains of the Moon. The high road, so narrow where it meets the gate that only four riders can pass, is watched over by twin watchtowers, which are joined by a covered bridge of grey stone that arches above the road. Defenders of the gate can fire through arrow slits in the towers, bridge, and battlements. Beyond the fortification is a steep, rocky trail which descends to the Vale.[2]

Ravens are kept at the gate, as are shaggy, sure-footed mountain horses in its stables.[2] The Bloody Gate can provide respite for at least a few thousand men.[3]

The commander of the fortification, the Knight of the Gate, traditionally asks the question, "Who would pass the Bloody Gate?" to all who would pass through.[2] A septon is also in attendance.[2]

Originally a rough-hewn unmortared wall built in the fashion of the ringforts of the First Men, the Bloody Gate was constructed anew during the rule of Osric V Arryn, King of Mountain and Vale.[4] Andals poured through the Bloody Gate into the riverlands after securing the Vale.[5]

During the Age of Heroes, a dozen armies smashed themselves to bits upon the Bloody Gate.[2] Halleck Hoare, King of the Isles and the Rivers, failed to conquer the fortification three times.[6]

During Aegon's Conquest, Queen Visenya Targaryen was charged with subduing the Vale of Arryn for her brother, King Aegon I Targaryen. Sharra Arryn, Queen Regent of the Vale, who ruled in her son's name, the boy-king Ronnel Arryn, amassed an army at the Bloody Gate. Visenya, however, simply bypassed the gate and flew on her dragon Vhagar straight up to the courtyard of the Eyrie to obtain the surrender of House Arryn.[7]

When Lady Jeyne Arryn died in 134 AC, her chosen heir was her cousin, Ser Joffrey Arryn, who had served as Knight of the Gate for a decade. Joffrey was opposed by Ser Arnold Arryn and Isembard Arryn, however, and a war of succession broke out. Ser Robert Rowan led a royal army of seven thousand or more in support of Joffrey, but they were weakened by clansmen attacks, cold, and hunger while traveling through the Mountains of the Moon. By the time the royal army reached the safety of the Bloody Gate, they had lost a third of their strength, including Robert.[3]

When Lord Jon Arryn wed Lysa Tully at Riverrun during Robert's Rebellion, Ser Brynden Tully informed his brother, Lord Hoster Tully, that he was going to serve Jon and his niece, Lysa.[2] Lord Arryn named Brynden as Knight of the Gate when King Aerys II Targaryen died and Robert I Baratheon became king.[8]

Tom of Sevenstreams, after being sent up the high road by Lysa, had his gold, horse, and clothing stolen by clansmen, leaving him only his harp. When he reached the Bloody Gate, the nude bard was forced by the garrison to sing "The Name Day Boy" and "The King Without Courage".[9] 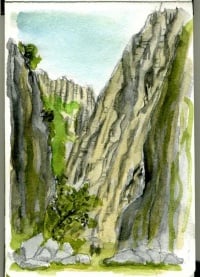 When Catelyn Stark brings Tyrion Lannister to the Vale of Arryn, Ser Donnel Waynwood leads twoscore knights and men-at-arms from the Bloody Gate's garrison to protect them from Vale mountain clans and escort them to the fortification. Catelyn's uncle, Ser Brynden Tully, the Knight of the Gate, greets the newcomers when they arrive. While Catelyn continues on to the Gates of the Moon with Tyrion and Brynden, the wounded Ser Rodrik Cassel and Ser Willis Wode remain at the Bloody Gate to recover with the aid of a septon.[2]

Because Lady Lysa Arryn refuses to send knights of the Vale to aid House Tully when war threatens, Brynden resigns as Knight of the Gate to return to Riverrun.[10]

Following Bronn's victory in Tyrion's trial by combat,[10] Ser Lyn Corbray escorts Tyrion and Bronn from the Eyrie to the Bloody Gate, where he commands them never to return to the Vale.[11]

Donnel has replaced Brynden as the Knight of the Gate.[12]

Robb Stark, King in the North and King of the Trident, asks that his aunt, Lady Lysa, allow his army to pass the Bloody Gate and take ship from Gulltown for the north, but Lysa refuses.[13]

After the Red Wedding, Sandor Clegane intends to take Arya Stark along the high road to the Bloody Gate so he ransom the girl to Lysa. However, they turn back in the foothills of the Mountains of the Moon because of frost and snow in the high passes above, as well as the threat of mountain clansmen.[14]

Men from the Bloody Gate travel to the Gates of the Moon to compete in the tourney determining the Brotherhood of Winged Knights.[15]

Many and more have broken themselves against my Bloody Gate, and the Eyrie is known to be impregnable.[16]

Donnel: May we enter the Vale?
Brynden: In the name of Robert Arryn, Lord of the Eyrie, Defender of the Vale, True Warden of the East, I bid you enter freely, and charge you to keep his peace.[2]

On the far side of the stoneworks, the mountains opened up suddenly upon a vista of green fields, blue sky, and snowcapped mountains that took her breath away. The Vale of Arryn bathed in the morning light.[2]

Lady Lysa is too fearful to admit an army to the Vale. Any army. The Bloody Gate will remain closed.[13]

Chapters that take place at the Bloody Gate