Tyrion is held captive in one of the Eyrie’s sky cells. Eventually he bribes the gaoler to take a message that he is ready to confess. When brought into the high hall, Tyrion manages to convince Lady Lysa Arryn to give him a trial by combat and the sellsword Bronn declares he will be Tyrion’s champion. 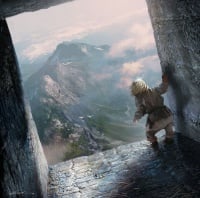 Tyrion in the Eyrie's Sky Cells

The ugly and sadistic gaoler Mord brings beans for Tyrion, who is in one of the Eyrie’s sky cells. As always, when Tyrion reaches for the plate, the oaf pulls it away and holds it over the edge of the cell, telling Tyrion to come get it. Tyrion is unwilling to step that close to the edge and Mord lets the plate fall. Tyrion curses Mord, who gives him a kick before he leaves.

Tyrion crawls to the corner to huddle under a thin blanket that has replaced the shadowskin cloak stolen by Mord. Tyrion reflects that he would gladly trade the cold and open sky cell for the dankest pit in Casterly Rock. When Mord placed Tyrion in the cell he promised that, sooner or later, Tyrion would fly. To make things worse, the floor slants towards the opening, making Tyrion afraid to sleep, lest he slip towards the edge.

Tyrion remembers when Lysa Arryn announced to her court that Tyrion had slain Jon Arryn, the Hand of the King. That was when Tyrion put his foot in it, remarking “Oh, did I kill him too.” He went on to wonder aloud when he would have had enough time to do all this killing. He should have been silent but he had been in a foul mood, having been humiliated by having to be carried the last leg of the climb to the Eyrie by Bronn. Lysa warned him about where he was but he threatened them with the wrath of Jaime Lannister all the same. He even declared his threat a promise and drove sickly young Lord Robert Arryn into a frenzy. It was only the intervention of Catelyn Stark that saved him from being made to fly when she insisted that Tyrion was her prisoner. Then he was sent to the sky cells.

Tyrion thought that they would not dare kill him out of hand, but now he is not so sure. He is getting weaker every day and it is only a matter of time before Mord’s kicks do him serious harm. He is sure that his father will have sent riders out by now and Jaime might already be leading an army to rescue him. Cersei might get King Robert to sit in judgment himself, which even Eddard Stark could not object to. Tyrion is sure he can win a trial since the Starks have no proof.

Tyrion wonders which of his siblings sent the footpad to kill Bran Stark and if they also conspired in the death of Jon Arryn. If Arryn was murdered it was subtly done, whereas sending a footpad to kill Bran was unbelievably clumsy. This leads Tyrion to wonder if there is some other force involved that has made him a pawn; Tyrion hates being a pawn.

Tyrion decides that he must free himself, and soon. He has no chance of overpowering Mord, so he must talk himself out. Tyrion hammers on the door, yelling for Mord. Mord is furious that Tyrion is making noise. Tyrion, remembering not to show fear, asks if Mord would like to be rich. Mord only strikes him with a leather strap. It takes a great deal of talking about Lannister gold while getting slapped before Mord finally starts to listen. Tyrion explains that, although she relieved him of his purse, Catelyn Stark would never rob him; therefore the gold is still his. Tyrion promises all of his gold to Mord in exchange for Mord telling Lysa Arryn that he wishes to confess his crimes. Tyrion even goes so far as to lie that his brother Jaime wears solid gold plate armor (it is actually gilded steel, but Mord would never know the difference}. When Tyrion senses Mord’s suspicion, he offers to write down the deal and Mord brings him a pen and paper.

Tyrion is shivering in his sleep when Ser Vardis Egen arrives to bring him to Lysa. Before he leaves, Tyrion asks Mord for his shadowskin cloak and Ser Vardis orders the unhappy gaoler to hand it over. The High Hall is filled with knights and retainers to hear his confessions. Tyrion is happy to see that young Lord Robert is missing from the high throne. Tyrion is also pleased to see Bronn and Marillion among the witnesses; with a singer present, whatever happens will not remain a secret.

Lysa comments to her sister that the sky cells always break prisoners, but Catelyn only says that Tyrion does not appear broken to her. Tyrion declares to himself that the time has come to roll the dice. He starts by declaring himself a vile little man and that his crimes and sins are beyond counting: whoring, gambling, wishing his own father and sister dead, and speaking ill of the royal court. Soon he is interrupted by a furious Lysa and Catelyn tells him pointedly that he is there to confess to the attempted murder of Bran Stark and the murder of Jon Arryn. Tyrion merely replies that he cannot confess to those crimes because he is innocent.

Lysa orders Tyrion taken back to a smaller sky cell with a steeper floor. Before he can be taken, Tyrion asks loudly if this is how justice is done in the Vale: he is accused of crimes, he denies them, and so he is thrown into a cell. He makes sure to show his bruised face to the crowd. Tyrion demands a trial where he can defend himself and be judged by gods and men. Lysa states that if Tyrion is found guilty, he will go through the “moon door”, which leads only to a fatal plunge to the mountainside below. Catelyn tells Lysa that this is unwise. Lysa states that her son will hear and judge Tyrion’s trial. Tyrion remembers Lord Robert stating that he wanted to see him fly.

Tyrion demands a trial-by-combat, which the fills the hall with derisive laughter. There are shouts throughout the hall, with most men asking to be given the honor of championing Lysa Arryn’s cause. Lysa declares that Ser Vardis Egen, the only silent man, will be her champion. Ser Vardis sinks to one knee, but declines the honor, insisting that to slaughter such a defenseless man would be shameful. Tyrion is quick to agree, demanding a champion the same as Lysa and naming his brother Jaime. When Lysa refuses Tyrion’s choice on the grounds that Jaime is hundreds of leagues away, Tyrion turns to Marillion to insist that when he makes a ballad of these proceedings he be sure to mention that Tyrion was denied a champion and sent bruised and hobbling against Lysa’s finest knight. Lysa tells him to name another champion. For a moment no one moves and Tyrion wonders if he has made a terrible mistake. Then there is a stirring in the back of the chamber, and Bronn calls out that he will stand as champion for Tyrion.