The Lords Declarant are a group of nobles from the Vale of Arryn in opposition to Lord Petyr Baelish.[1][2]

Lady Lysa Arryn, the widow of Lord Jon Arryn, Defender of the Vale, and mother of young Lord Robert Arryn, weds her childhood friend, Lord Petyr Baelish, at the Fingers.[3] Lysa grants her new husband the title of Lord Protector of the Vale, but many Valemen resent Petyr for his new position and Lysa for having refused to aid her nephew, Robb Stark, during the War of the Five Kings.[4]

After Lysa angrily confronts her niece, Sansa Stark, at the Eyrie, Petyr tosses his new bride to her death through the Moon Door.[4] 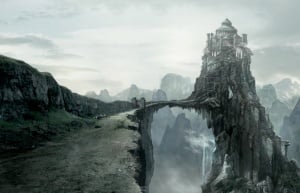 The Lords Declarant confront Petyr Baelish at the Eyrie. Art by Kim Pope

Petyr places blame on Lysa's death on her singer, Marillion, and has Sansa pretend to be his bastard daughter, "Alayne Stone".[5] Petyr grants the Gates of the Moon to Lord Nestor Royce.[5]

Led by Nestor's cousin, Lord Yohn Royce, six lords of the Vale meet at Runestone and announce their intent to remove Petyr as Lord Protector of the Vale by any means necessary. Their letter is sent to the Eyrie and King's Landing.[1][2] Queen Cersei Lannister responds that Lord Baelish be unharmed but otherwise the terms of Robert's minority be decided amongst themselves.[1] The Lords Declarant mass their forces beneath the Giant's Lance, intending to blockade the Gates of the Moon and the Eyrie until Lord Petyr surrenders. Each lord brings a thousand soldiers.[2]

After some time of denying access of food and other goods from the outside to the Eyrie, the Lords Declarant negotiate a meeting and arrive with Ser Lyn Corbray to confront Petyr with their objections to his rule and their insistence at taking Lord Robert Arryn away from him. However, their demands are stymied by a display of belligerence from Lyn, which shames the Lords Declarant into giving Petyr a year to show his prowess at raising Robert and ruling the Eyrie. As it turns out, Petyr has his own agent among them and believes the weaknesses of the lords will make them easy to manipulate from now on.[2] Yohn sees Alayne during the proceedings, but shows no sign of recognizing her as Sansa Stark.[2]

Lord Benedar Belmore, Ser Symond Templeton, and Lady Anya Waynwood attend the wedding of Lyn's brother, Lord Lyonel Corbray, in Gulltown, an event arranged by Petyr Baelish. The other Lords Declarant shun the wedding, however.[6] Having begun buying up the debts of House Waynwood, Petyr persuades Anya to give permission for Sansa to wed Ser Harrold Hardyng, her ward and Robert's heir, if Harry agrees.[6]

The six had gathered at Runestone after Lysa Arryn's fall, and there made a pact together, vowing to defend Lord Robert, the Vale, and one another. Their declaration made no mention of the Lord Protector, but spoke of "misrule" that must be ended, and of "false friends and evil counselors" as well.[2]

Lyn: My lady has a thirst. Whenever she comes out to dance, she likes a drop of red.


Yohn: Your lady must go thirsty.


Lyn: The Lords Declarant. You should have named yourselves the Six Old Women.[2]
—Lyn Corbray and Yohn Royce