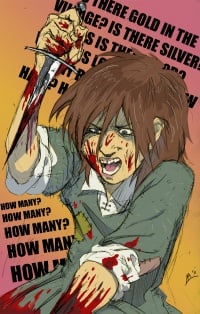 Sandor Clegane and Arya Stark come to the inn at the crossroads. To Arya's dismay, she recognizes Polliver and the Tickler with a pimply squire. The squire tries to bait Sandor with insults about fleeing King's Landing and the room is tense. The Hound demands wine, which the innkeeper brings and Sandor gulps down. When Sandor claims the men-at-arms will torture the innkeep for his gold, the innkeep, his girls, and other patrons vacate the common room.

The Tickler tells Sandor what has happened in the realm, including Tyrion's marriage, Joffrey's death, and Tyrion's imprisonment. He claims that Sansa Stark's sister (Arya) has been found and is to marry Ramsay Bolton, that Harrenhal has been taken by Gregor Clegane, that Riverrun is under siege by the Lannisters, and that Randyll Tarly has taken Maidenpool. He says only the Blackwoods are still holding out, and the Brackens are fighting them around Raventree Hall.

The Tickler says Gregor would prefer that Sandor come back with them to Harrenhal, but when Sandor refuses, the Tickler throws a knife at him. Sandor, the Tickler, and Polliver all draw swords and begin to fight. The squire tries to join in but Arya throws a cup at him and knocks him down. Sandor is not fighting his best and Arya realizes he drank his wine too fast and is drunk. During the fight Arya stabs the squire in the belly and then sneaks up behind the Tickler. Repeating the questions he had once asked of his torture victims, Arya stabs the Tickler over and over again in a rage until Sandor stops her. The mortally-wounded squire asks for mercy. Sandor tells Arya to give him mercy, and asks if she remembers where the heart is. Arya recovers Needle, which was carried by Polliver, and kills the squire.

Sandor, seriously wounded, says Gregor must hold the ruby ford and that they will make for Saltpans and find a ship to the Vale. They leave the inn to travel on but the Hound is so wounded that he needs tending and they stop. The next day he is so weak that he falls out of his saddle. While he lies in a fevered sleep, Arya thinks about killing him. He wakes to see what she is contemplating and urges her to do it - to give him mercy - but Arya leaves him and rides on to Saltpans.

Arya tries to find a boat that goes to the north but only finds the trading ship Titan's Daughter with Braavos as its destination. She does not have enough money to get on board, however. Arya shows the captain the coin she received from Jaqen H'ghar and says "valar morghulis", which causes him to give her both a cabin and passage. 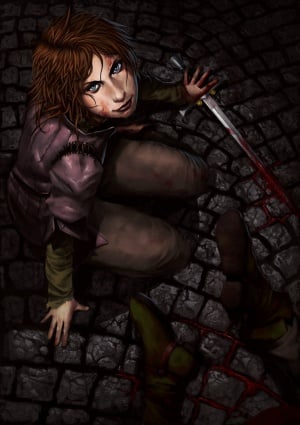 Arya gets her Needle back © Josu Hernaiz