Nettles, also known as Netty, was a dragonseed and the first and possibly last dragonrider of the dragon Sheepstealer.[1][2]

Nettles was a small, skinny, brown-skinned girl with black hair and brown eyes.[1][3] She had crooked teeth and a scarred nose. According to Gyldayn, she could not be called pretty.[3]

Nettles was foul-mouthed, filthy, and fearless.[1] 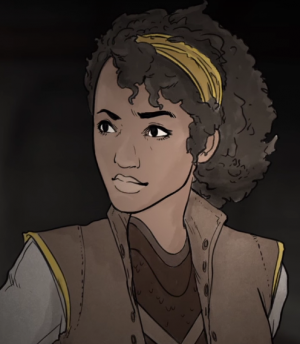 Nettles from Game of Thrones Blu-ray

According to Mushroom, Nettles was a bastard of uncertain birth, born to a dockside whore.[1] She grew up homeless in Spicetown and Hull on the island of Driftmark.[3] According to Septon Eustace, the girl's nose was slit after she was caught thieving.[3]

When it was decided by Prince Jacaerys Velaryon that the blacks needed more dragonriders during the Dance of the Dragons, several "dragonseeds" on Dragonstone came forward to answer the prince's call in 129 AC. Then sixteen years of age, Nettles was able to tame the wild dragon Sheepstealer by bringing it a freshly slaughtered sheep each morning, allowing Sheepstealer to become accustomed to the girl.[1]

Netles fought valiantly on behalf of Queen Rhaenyra Targaryen in the Battle of the Gullet. While her fellow dragonriders Hugh the Hammer and Ulf the White celebrated after the battle, Nettles was upset by the death of Jacaerys.[1] During the fall of King's Landing, Nettles landed Sheepstealer on Visenya's Hill.[1]

While searching the riverlands for Prince Aemond Targaryen and Vhagar, Prince Daemon Targaryen, Rhaenyra's husband, was constantly accompanied by Nettles, both in the sky and at their base, Maidenpool. Despite the fact that Nettles was an unlikely paramour for a prince, according to Mushroom, Daemon had come to love the girl and took her as his bedmate. In addition, Norren, the maester at Maidenpool, stated in the Chronicles of Maidenpool that the dragonriders slept in adjoining bedrooms, but that they ate together each night and morning. He said that Daemon doted upon Nettles "as a man might dote upon his daughter", and described Daemon teaching Nettles common courtesies and giving her fine gifts such as an ivory hairbrush, a silvered looking glass, a velvet and satin cloak, and leather riding boots. Norren said that Daemon showed Nettles how to wash herself properly, and recorded that maidservants reported they often shared a single tub, washing each other.[3]

After the treason of the dragonseeds Hugh Hammer and Ulf White at the First Battle of Tumbleton, Queen Rhaenyra's court at the Red Keep was outraged. Lady Mysaria, once Daemon's paramour, fed Rhaenyra's growing distrust of the dragonseeds with rumors of Nettles and Daemon's relationship. Rhaenyra raged, declaring that Nettles used spells to bond with Sheepstealer and to seduce the prince. The queen sent a raven to Manfryd Mooton, Lord of Maidenpool, ordering him to deliver Nettles's head but not to do Daemon any harm, only to tell him to return to the capital. However, according to Maester Norren, Manfryd and his advisors, fearful of how Daemon slept beside Nettles, unwilling to kill a guest or a young girl (or two guests, to prevent Daemon from becoming enraged at the death of the girl he was "more than fond of" and taking out his wrath on Maidenpool), disobeyed the queen and followed Norren's advice to pretend that they had never received the letter. When Maester Norren informed Daemon that Rhaenyra had declared Nettles a traitor, Daemon recognized Mysaria's actions in Rhaenyra's words, and allowed Nettles to escape. It is unknown how they spent their last night together, but at dawn Daemon helped Nettles saddle Sheepstealer one last time. Nettles killed a large black ram and fed it to her dragon, then tearfully flew Sheepstealer into the morning mists of the Bay of Crabs. According to Norren, no word of farewell was spoken between Daemon and Nettles, but as Sheepstealer flew away, Caraxes let out a scream that shattered all the windows of Jonquil's Tower.[3]

The disappearance of Nettles enraged Rhaenyra.[4] Instead of returning to his wife, Daemon flew to Harrenhal, where he perished fighting Aemond in the Battle Above the Gods Eye in 130 AC. Since Daemon's body was never found in the Gods Eye, some songs claim that he survived the encounter and found his way back to Nettles.[3]

When King Aegon II Targaryen regained the Iron Throne after Rhaenyra's death, there were reports that Sheepstealer had been seen at Crackclaw Point and the Mountains of the Moon.[5] In 134 AC during the reign of King Aegon III Targaryen, Ser Robert Rowan led a royal army to the Vale of Arryn to support Ser Joffrey Arryn. Robert's men encountered Sheepstealer and a ragged Nettles in a cave, and in the ensuing fight sixteen men were slain and threescore more were wounded. Nettles and her dragon were last seen flying deeper into the Mountains of the Moon.[6]

Some maesters believe that the Burned Men originated from members of the Painted Dogs who worshipped a fire-witch and her dragon in a hidden vale after the Dance, bringing gifts to the dragon woman and displaying burns as proof of their valor.[7][6]

She is a common thing, with the stink of sorcery upon her.[3]

The girl is but a child, however foul her treasons.[3]

The prince is more than fond of this brown child, and his dragon is close at hand. A wise lord would kill them both, lest the prince burn Maidenpool in his wroth.[3]