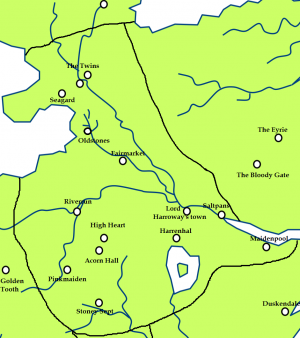 Maidenpool
The riverlands and the location of Maidenpool

At the start of the Conquest, Lord Mooton allied himself with Lord Darklyn to fight Aegon the Conqueror. Both Lords died in the following battle, Lord Mooton's brother, Jon Mooton, yielded to Aegon and became the new Lord of Maidenpool. Lord Jon later fought for the Targaryens in the Field of Fire, slaying men who tried to escape the dragons.[5][4]

During the Faith Militant uprising, Lord Mooton slew Lord Rupert Falwell in the battle at the Great Fork.[12][7]

In his youth, Lord Jonah Mooton was a friend of Princess Saera Targaryen. When she disappeared in 85 AC her father, King Jaehaerys I Targaryen, asked Jonah to watch for her in Maidenpool.[13]

At the start of the Dance of the Dragons, Lord Walys Mooton supported Princess Rhaenyra Targaryen's claim to the Iron Throne. In that effect, Lord Walys retook Rook's Rest for the blacks. He was later slain in a failed attempt to kill King Aegon II Targaryen's dragon, Sunfyre. The older of his two brothers, Manfryd, succeeded him as Lord of Maidenpool and continued to support the blacks.[6][8]

Lord Manfryd hosted the dragonriders Prince Daemon Targaryen and Nettles at Maidenpool for a time while the two were searching for Prince Aemond One-Eye and his dragon, Vhagar. Lord Manfryd changed side and aligned his house with King Aegon and the greens after refusing to kill Nettles at Rhaenyra's behest.[6][9]

After the war, Lord Manfryd served as one of the seven initial council of regents for the King Aegon III Targaryen. Lord Mandfryd served until his own death due to illness in 134 AC.[14][10]

When Lord Bloodraven marched on Whitewalls to quash the Second Blackfyre Rebellion, among the river lords who came in support was Lord Mooton.[15]

According to a nameless traveller, Lord William Mooton and his sons try to hunt a huge she-wolf that had attacked some smallfolk.[17]

Despite Maidenpool having been sacked three times during the war, Lord William still holds the town.[18]

Lord Randyll Tarly arrives at Maidenpool and sets out at taking control of the town and fighting outlaws in the region while Lord William remains safely behind his walls.[18] Lord William agrees to betroth his eldest daughter and heir, Eleanor Mooton, to Randyll's son and heir, Dickon Tarly.[18]