A Clash of Kings-Chapter 5

Arya and the others encounter more refugees every day as they journey north. One evening they halt at an inn, where they hear news of the war in the riverlands. Outside the inn, Arya talks with the prisoner Jaqen H'ghar. Soon after, six gold cloaks arrive with an arrest warrant for the Bull, but Yoren refuses and after a tense standoff the gold cloaks retreat.

Each day, Arya and the others travel from dawn to dusk, and at night they eat by the light of the Red Sword. The men take turns standing watch, since they can see the firelight of other travellers. Every night there are more camps and every day there is more traffic on the kingsroad. They meet every kind of person and every mode of transportation, but most come by foot, with their goods on their shoulders and wary looks on their faces. They are all headed south toward King's Landing, and Arya wonders why no one else is going north like them.

One morning, a passing merchant offers to buy Yoren’s wagons for a quarter of their worth. He explains there is war to the north and claims Yoren will do better selling to him than being robbed by soldiers, but Yoren refuses. That same day, Arya notices the first grave (dug for a child) and a few leagues on Praed points out a whole row of them. After that hardly a day passes without seeing one.

One night, Arya wakes to find the night oddly quiet. When Praed does not wake the next morning, Arya realizes it was his coughing that was missing. They bury the sellsword where he slept and split his valuables amongst them. Yoren gives the longsword to the Bull, claiming he has the arm to learn to wield it.

That evening they stop in a village at an ivy-covered inn. They cannot afford rooms, but Yoren arranges a hot meal and use of the bathhouse if anyone feels the need. Arya knows she must smell as bad as Yoren, but cannot risk revealing her gender by bathing. She rationalizes that it would be a shame to drown the creatures living in her clothes that have come all the way from Flea Bottom. The Bull, Tarber, and Hot Pie line up for the bathhouse with some of the other men while the rest crowd into the common room. Yoren even sends Lommy out with tankards for the three men who remain fettered in the wagon.

The innkeeper gives them all a round of beer on the house and tells them his brother Lync was sent to the Wall for filching pepper from his lord’s table. Arya sips her beer cautiously, remembering how she enjoyed beer when her father permitted it and how Sansa would make a sour face and insist wine was ever so much finer. The memories make her sad.

The inn is full of refugees who scorn Yoren’s plan to continue north. The innkeeper explains that half the fields are burnt, and the remaining people are walled up in holdfasts. Yoren insists that the Night’s Watch takes not part, but the innkeeper points out that wild men have come down from the Mountains of the Moon and the young Lord Stark has come south to war. Mention of her brother grabs Arya’s attention. A man named Hod claims that Robb rides into battle on a wolf as big as a horse, which no one seems to believe.

Then talk turns to the great pack of wolves near the Gods Eye who have even attacked men, led by a she-wolf from the seventh hell. Talk of a she-wolf makes Arya wonder if the Gods Eye is near the Trident, where she was forced to leave her direwolf Nymeria. One of the travellers claims that this she-wolf once snatched a baby from its mother’s arms in the midst of a village, and that the men who pursued lost all of their dogs and nearly their lives. Arya blurts out that this is just a story because wolves do not eat babies. The man asks what Arya would know about wolves, but Yoren gives her a shove and orders her outside before she can answer. 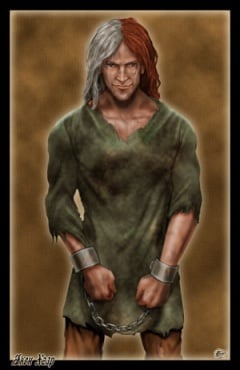 Outside, the youngest and handsomest of the three men in the wagon calls to her with a friendly voice. Arya approaches warily with one hand on Needle. The man is slender and fine-featured with red hair on one side and white on the other. He speaks in a strange syntax, referring to himself as “a man” and to Arya as “a boy,” and his accent reminds her of Syrio Forel. He asks for another beer and suggests he could use a bath, claiming Arya could make a friend. Arya insist that she has friends, but the noseless prisoner remarks that he cannot see any. The third prisoner only hisses and sticks out the stump of his tongue.

The friendly prisoner begs forgiveness for his present company, and introduces himself as Jaqen H'ghar from Lorath. He introduces the noseless man as Rorge and the other as Biter (a name Jaqen gave the mute because of his filed teeth). Rorge curses and throws his tankard at Arya, demanding more beer, but she manages to dodge. Asking herself what Syrio would do, Arya draws her practice sword. Rorge threatens her, but Arya recalls her mantra, “Fear cuts deeper than swords,” and approaches the wagon. When Biter lurches at her, Arya hits him hard right between the eyes. Biter reels back but then throws all his weight against his chains and attempts to grab her again. When the bonds hold and Biter collapses, Jaqen H’ghar observes that Arya has more courage than sense.

Arya backs away from the wagon again. When she feels a hand on her shoulder she whirls around, but it is only the Bull, who reminds her that Yoren warned them not to go near the three in the wagon. Arya insists they do not scare her, but the Bull replies, “Then you’re stupid. They scare me.” As the Bull leads her away, Arya hears Rorge laughing and Biter hissing behind them.

Wanting to hit something, Arya asks if the Bull wants to fight. Startled, he warns her how strong he is, but Arya argues that she is quick. The Bull draws Praed’s longsword and declares it cheap steal, but still a real sword. Arya draws Needle and declares that it is good steel, which makes it even realer. They each ask the other to promise not to cry if they get cut. Arya assumes her water dancer's stance, but the Bull is distracted by six gold cloaks riding up the kingsroad on lathered horses.

As the gold cloaks draw up in front of the inn, Arya pulls the Bull behind a tall hedge and tells him to be quiet as a shadow. The gold cloak officer asks some of the recruits outside the bathhouse if they are the ones who left King’s Landing to take the black. The men say they might be, so the officer dismounts and declares he has a warrant for a certain boy.

Yoren steps out of the inn to ask who wants the boy. The officer presents his warrant and declares that Queen Cersei sent them. Behind the hedge, the Bull asks why he and Arya are hiding. Arya explains that it her they are after. The Bull asks why the queen would want her, but Arya tells him to be quiet. Yoren declares the warrant pretty, but insists that the boy is in the Night’s Watch so what he did back in the city does not matter. The officer declares that neither he nor the queen cares. Arya considers running, but knows she cannot escape. She decides she is tired of running; a real water dancer would never run. 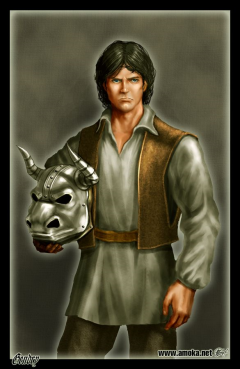 Yoren insists that the gold cloaks will have no one, since there are laws on such things. The officer draws his shortsword and declares it his law. Yoren only looks at the blade and declares, “That’s no law, just a sword. Happens I got one too.” The officer threatens that he has five men with him, but Yoren spits and declares that he has thirty. A gold cloak with a broken nose laughs and asks who is first. In a gesture of solidarity, Tarber takes up a pitchfork, Cutjack pulls out his hammer, Kurz draws his skinning knife, Koss strings his longbow, Reysen snatches up his staff, Dobber (fresh from the bath) drops everything but his dagger, and Hot Pie scrambles to find a big rock. Arya is amazed; she hates Hot Pie, so why would he risk his life for her?

Refusing to let the others die for her, Arya shoves through the hedge with Needle and joins the others. The gold cloak with the broken nose laughs and tells her to put away the blade, calling her a girl. Arya insist she is not a girl, furious that they do not understand she is the one they want. Yet when the Bull comes up behind her the officer declares him the one they want. It is a mistake to take his eyes off Yoren, however, and quick as a snake Yoren places his sword at the officer’s throat.

Once the gold cloaks are out of sight, Hot Pie whoops in triumph, but Yoren remains angry and orders everyone up and moving; if they ride all night they may be able to stay ahead for awhile. After giving the officer’s sword to Hot Pie, Yoren walks over to the Bull and declares that the queen wants him bad. Arya asks why the queen would want a bastard boy like the Bull, but the Bull asks why she would want a gutter rat like Arya. Suspicious that the Bull is more than he appears, Arya asks his true name. He replies that it is Gendry. Yoren claims not to know why anyone would want either of them, but declares they cannot have them regardless. He orders Gendry and Arya to take the two coursers and orders them to ride hard for the Wall at the first sight of a gold cloak, since the rest of them mean nothing to the gold cloaks. Arya points out that the officer promised to take Yoren’s head, but Yoren replies that if the man can take it he is welcome to it.