The Field of Fire was a major battle during Aegon I Targaryen's war of conquest. According to semi-canon sources the field is located in the northern part of the Reach.[3]

Aegon Targaryen, Lord of Dragonstone, landed at what would become King's Landing and began subjugating the Seven Kingdoms. After the submissions of Harrenhal, Crackclaw Point, and Storm's End, Aegon and his sisters, Visenya and Rhaenys, gathered at Stoney Sept with their dragons. Most of House Targaryen's soldiers were conscripts from the recently-liberated riverlands. Lord Jon Mooton of Maidenpool, one of the first lords to come over to the Targaryens, was given command of the Targaryen army.[2][4]

Loren I Lannister, King of the Rock, joined forces with Mern IX Gardener, King of the Reach, at Goldengrove in an attempt to throw the Targaryen invaders back. Between the two kings they had roughly 55,000 men, roughly five times as many as the Targaryens, including 5,000 mounted knights. Marching beside King Mern were the Oakhearts, the Florents, the Rowans, the Peakes, and the Redwynes.[1]

Having brought half as many more men to the battle than Loren, Mern commanded the center and his son Edmund led the vanguard. Loren led the right wing while Lord Oakheart had the left.[2]

Lord Manfred Hightower, the Lord of the Hightower, heeded the advice of the High Septon and did not join his liege lord, King Mern, on the march and instead kept his forces back at Oldtown.[2]

The two armies met in the plains south of the Blackwater, near the present Goldroad. While the Two Kings hoped to flank Aegon and then smash Aegon's center with knights, the Targaryens established themselves in a defensive crescent.[2]

The allies' charge began to break the Targaryen spear lines, but Aegon and his sisters took to the air on their dragons, Balerion, Meraxes, and Vhagar. The dragons began to set the dry field aflame on all sides, especially upwind of the Gardener and Lannister armies. Lord Mooten's Targaryen forces were safely upwind, allowing them to finish off allied soldiers who emerged from the flame. King Loren rode through the flame to safety when he realized Aegon would be triumphant.[2]

The dragons killed 4,000 men of the combined Lannister and Gardener army, among them King Mern and all of his sons, grandsons, brothers, cousins, and other kin.[4] The knights of the Order of the Green Hand were wiped out.[5] Lord Armen Peake and his sons perished.[6] Another thousand men perished from sword and spears and arrows while 10,000 men suffered burns. Of the Targaryens less than 100 were lost while Visenya took an arrow to the shoulder. One nephew of King Mern survived the battle, but he died of his burns three days later. When he died, House Gardener died with him.[2]

The battle, the only time in Aegon's Conquest in which all three Targaryen dragons took to the battlefield at the same time, become known afterward as the Field of Fire.[4] 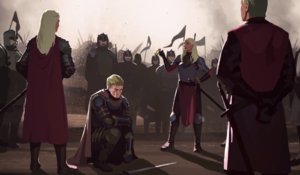 The swords of the defeated were sent downriver on the Blackwater Rush to the Aegonfort, where they would form part of Aegon the Conqueror's Iron Throne.[2][7] Loren I Lannister, King of the Rock, was detained the following day. Loren the Last gave up his claim to kingship and became Warden of the West under the rule of House Targaryen.[4]

Aegon marched for the extinct Gardeners' seat of Highgarden, whose steward, Harlen Tyrell, surrendered without conflict. Aegon rewarded him by giving House Tyrell dominion over the Reach and raising him to Lord of Highgarden, Lord Paramount of the Mander, and Warden of the South.[8][2] The Houses Oakheart, Florent, Rowan, Peake, and Redwyne bitterly protested the elevation of the Tyrells, insisting that their blood was nobler than that of the "upjumped stewards" and that they had closer relations to House Gardener,[1] with the Florents boasting the superior claim by blood.[9] However, their protests were unsuccessful, perhaps in part because they had taken arms against the Targaryens on the Field of Fire, as speculated by Maester Yandel.[1]

After the surrender of Highgarden, Aegon marched north to the Red Fork of the Trident to face 30,000 northmen marching south under the leadership of Torrhen Stark, King in the North. Aegon and his sisters gathered an army of 45,000 from the riverlands, stormlands, Reach, and westerlands in response. Having learned of the burning of Harrenhal and the Field of Fire, Torrhen knelt in submission to Aegon rather than give combat, becoming Aegon's Warden of the North.[2]

It was the only time that Vhagar, Meraxes, and Balerion were all unleashed at once. The singers called it the Field of Fire.[4]