House Oakheart of Old Oak is an old and powerful family from Old Oak in the Reach, one of the main houses sworn to House Tyrell.[4][5] They are among the noble houses from the Reach that can trace their descent from Garth Greenhand.[6]

Their arms are three green oak leaves on gold.[2][7] Their banner is thus referred to as the Three Leaves.[8][9] According to semi-canon sources, their motto is "Our Roots Go Deep".[10]

Of First Men origin, the Oakhearts claim descent from John the Oak, a legendary son of Garth Greenhand sired on a giantess.[3] The petty kings of Old Oak joined the realm of Garth III Gardener, King of the Reach, through a pact of friendship and mutual defense.[11] Lancel I Lannister, King of the Rock, once conquered the Kingdom of the Reach as far south as Old Oak before he fell in battle.[12]

As part of the longstanding rivalry between the Reach and Dorne, Oakhearts have fought Dornishmen extensively. Lord Edgerran Oakheart was known for fighting the Dornish, and Alester Oakheart died in the Prince's Pass while sounding his warhorn with his last breath.[8] House Peake once boasted marrying their daughters to Oakhearts through the centuries under House Gardener.[13]

During Aegon's Conquest, Lord Oakheart led King Mern IX Gardener's left at the Field of Fire, where the Gardeners burned and their line ended. House Tyrell became the Oakhearts' new liege lords,[14] despite the Oakhearts boasting an older and more distinguished lineage than the Tyrells, as well as closer blood ties to House Gardener.[15] The Oakhearts had the honor of hosting King Aegon I Targaryen and his court many times at Old Oak during his numerous royal progresses across his new realm.[16]

In 12 AC, during the First Dornish War, Ser Jon Cafferen was to be wed to Alys Oakheart, daughter of the Lord of Old Oak. At the wedding, the notorious Wyl of Wyl led attackers that slew Lord Oakheart and most of the guests. Lady Alys and her handmaids were carried off and sold to a Myrish slaver.[17] The actions of the Wyl of Wyl are still infamous at Old Oak.[18] When Nymor Martell, Prince of Dorne, sent his daughter Deria as an envoy in 13 AC, King Aegon I rejected Lord Oakheart's suggestion to send her to the meanest brothels of King's Landing.[17][18]

During the reign of Maegor I Targaryen, Lords Torgen Oakheart and Rickard Rowan supported Septon Moon in the Faith Militant uprising. When Maegor died in 48 AC, Moon camped outside the walls of Oldtown, and the Lords Oakheart and Rowan joined him. Lord Donnel Hightower was reluctant to offer battle to the lords protecting Septon Moon, while Oakheart and Rowan were likewise reluctant to commit their hosts to assaulting Oldtown. When Moon was assassinated, Lord Torgen decamped the next day.[19] Lord Torgen later attended the wedding of Rogar Baratheon and Alyssa Velaryon, where he met King Jaehaerys I, pronouncing him grim.[20] Ser Ryam Redwyne unhorsed Ser Arthor Oakheart at a tourney in King's Landing in 58 AC. Lord Torgen attended the feast that followed.[21] In 73 AC, Lord Oakheart held a tourney to celebrate the birth of a son, where Prince Baelon unhorsed Ser Denys, heir to Old Oak.[22]

When Princess Rhaenyra Targaryen toured the south in 112 AC, the son of Lord Oakheart unsuccessfully courted her.[23][24] When the Dance of the Dragons broke out, House Oakheart would side with Princess Rhaenyra and the blacks. However, Prince Daeron the Daring and Lord Ormund Hightower forced the submission of the Oakhearts at Old Oak, for none dared face the prince's dragon Tessarion.[25] Lord Torrhen Manderly intended for King Aegon III Targaryen to visit the Oakhearts at Old Oak during his first royal progress.[26]

Ser Olyvar the Green Oak served in the Kingsguard of the Young Dragon, King Daeron I Targaryen. During the king's Conquest of Dorne, Ser Olyvar died alongside his king at the hand of Dornish assassins in 161 AC, having been treacherously ambushed under a peace banner.[8][27]

House Oakheart tried to keep one foot in each camp during the First Blackfyre Rebellion.[28] Ser Gwayne Oakheart participated in the tourney at Ashford Meadow in 209 AC.[29]

Ser Arys Oakheart was named to the Kingsguard of Robert I Baratheon in 290 AC.[30]

Ser Arys Oakheart serves the Iron Throne as a Kingsguard for Robert I Baratheon and his Hand of the King, Lord Eddard Stark.[31] After Robert's death, Arys serves his son, King Joffrey I Baratheon.[32] 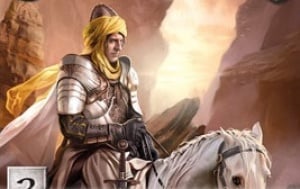 Arys's mother, Lady Arwyn Oakheart, follows Lord Mace Tyrell in raising her banners for Renly Baratheon and is part of his war councils.[2] The Oakheart leaf is seen north of the Mander after Renly's death and the surrender of Storm's End.[33]

Ser Arys objects to Joffrey when the boy king orders him to hit Sansa Stark. Although he eventually does strike Sansa, Arys does not hit the girl hard.[34] Arys is sent to Dorne with Princess Myrcella Baratheon as her sworn shield.[35]

Lady Oakheart is rewarded with lesser tracts after the Battle of the Blackwater, though she is not present at King's Landing.[36]

Arys is seduced by Princess Arianne Martell and conspires with her to crown his charge, Myrcella.[8] He is killed by Areo Hotah when discovered at the Greenblood, preferring death to disgrace.[37]

Brienne of Tarth and her companions see the corpses of the perpetrators of the raid on Saltpans hanged from trees. Among the dead is a man with an oak leave badge sewn on his breast, presumably a Oakheart man-at-arms who became a broken man during the War of the Five Kings.[38]

House Oakheart at the end of the third century

The known Oakhearts during the timespan of the events described in A Song of Ice and Fire are: