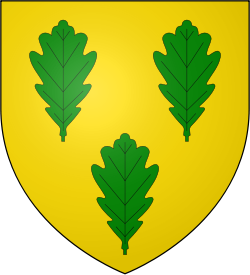 The arms of House Oakheart include three green oak leaves.

Oaks are common trees in the known world similar to the real-life oaks. Their fruits are called acorns.

Two gilded oak thrones sat on the dais of Whitewalls's great hall.[23] The Lords of the Crossing of House Frey sit on a throne made of black oak.[19]

Heavy oak-and-leather chairs can be found in the solar of the Eyrie.[25]

The chair of the Lord Commander of the Kingsguard in the Round Room in White Sword Tower is made of old black oak.[28]

The high ceilings of the solar in Raventree Hall as well as the heart of the Great Pyramid of Meereen are supported by great beams of dark oak.[29][30]

Oak is used by multiple Westerosi Houses on their coat-of-arms; such as the leaves of House Oakheart, the spoon of House Hetherspoon, the escutcheon of House Hewett, the barrels of House Lolliston, the doors of House Rhysling, the acorns of House Smallwood, the saltire of House Sparr, the paly of House Uffering, and the field of House Woodright.[31]

Owen Oakenshield and John the Oak were two sons of the mythological Garth Greenhand. The Oakhearts of Old Oak claim descent from the latter.[32] Oakenshield is the name of an abandoned castle of the Night's Watch along the Wall, as well as the castle of House Hewett located in Lord Hewett's Town on the Oakenshield island.[33]

House Yew in the Westerlands claim descent from Alan o' the Oak, a legendary figure from the Age of Heroes.[34]

Ironoaks and Acorn Hall are the seats of Houses Waynwood and Smallwood respectively.[35][36] The Acorn Water is a small river near Winterfell.[37]

Outside of the North, great oaks can be used in place of weirwood as heart tree in godswoods, such as at the Red Keep.[38]

The lands of House Umber are known for their forests of tall pine and old oak.[39]

The tree that gives the village of Pennytree its name is an ancient and tall oak.[29]

According to legend, the Oakenseat was carved from an oak planted by Garth Greenhand himself.[40] The Gardener kings used it as a throne until its destruction by Dornish invaders who sacked Highgarden late in the reign of King Garth X Gardener.[41]

First Men made their homes beneath ancient and tall trees such as oaks.[42]

Lord Alyn Velaryon earned the nickname Oakenfist after he rammed and sank the Braavosi dromond Grand Defiance strucking its side "like a great oaken fist".[43] The Oakenfist's squire later wrote a biography on him titled Hard as Oak.[44]

Ser Olyvar Oakheart of the Kingsguard is remembered as the Green Oak.[45]

Ser Arlan of Pennytree was buried on a hill near an oak tree.[7]

During the harvest feast, Bran Stark sits in the oak chair reserved for the Lord of Winterfell.[39]

The three great trebuchets built inside the Mud Gate in King's Landing prior to the Battle of the Blackwater are made of old oaks.[46]

Lady Ravella Smallwood gives a dress paterned with the acorns of her house to Arya Stark. Arya first complains she looks like an oak tree and inadvertently tears the dress but she later apologizes to Lady Smallwood and compliments her gift.[47]

During the battle beneath the Wall, the brother of the Night's Watch throw big oak barrels full of frozen gravel from atop the Wall onto the [[free folk]'s turtle.[48]

Petyr and Merrett Frey are hanged from an oak tree by the brotherhood without banners.[49]

At the kingsmoot on Old Wyk, Asha Greyjoy presents oak chests full of pebbles, pinecones, and turnips to the ironborn captains to show them how little they have gained from the raidings in the north.[50]

Oak and iron, guard me well, or else I'm dead and doomed to hell.[7]