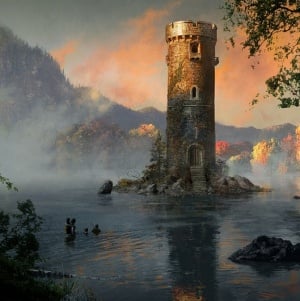 Bran, Hodor, Meera and Jojen try to make their way to Queenscrown holdfast. - by Michael Komarck ©

Bran and the others reach a small, deserted village on a lake. There is a holdfast tower on an island in the middle of the lake, and Bran tells them that Good Queen Alysanne once stayed there. Brandon's Gift is a strip of land south of the Wall to a distance of 25 leagues which was once given to the Night's Watch to support them. The New Gift, given to the Watch by Queen Alysanne and her husband King Jaehaerys I, doubled that distance. Bran tells them there is a secret walkway just beneath the lake’s surface that will allow them to reach the tower.

They stay in the tower that night during a terrible thunderstorm, and Bran tells them that all the gates through the Wall were sealed when each of the castles had to be abandoned, leaving only three gates open at each of the manned castles. When Hodor starts to scream in fear of the thunder, Bran reaches out to him the way he does to Summer, and calms the big man. Jojen spots men on the shore in the village, and Bran enters Summer to investigate.