Queenscrown is an abandoned tower holdfast with a village in the New Gift.[1] It is located west of the kingsroad and south of the Wall.[2] 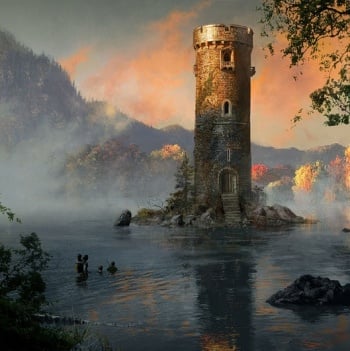 Bran, Hodor, Meera, and Jojen trying to make their way to Queenscrown's holdfast, by Michael Komarck ©

The stone holdfast tower of Queenscrown is described both as a roundtower and a towerhouse,[3] it stands upon an rocky island in a lake, with many oak trees growing thick along the shore.[1] On the lakeshore opposite the tower's entrance are the remnants of a village surrounded by oak and apple trees. Its inn is set among a dozen apple trees, but all that remains of the building are a stone chimney and two cracked walls, with an apple tree growing through the common room.[1] The inn used to be small and was made from timber.[3] The houses of the village are tumbledown cottage's made from daub-and-wattle, most have collapsed.[1][3]

A stone causeway, runs beneath the waters from the lake to the island, it starts as a stone pathway three feet wide, leading right out into the lake and were the path of the causeway comes climbing out of the water onto they island it turns into a short flight of stone steps that lead to the holdfasts door. Path, steps, and door are in a straight line, which makes you think the causeway runs straight, but that is not so. The path under the water is not straight instead it ziggs and zaggs going a third of the way around the island before jagging back. The turns are treacherous, and the long path means that anyone approaching would be exposed to arrow fire from the tower for a long time.[1]The hidden stones of the path are slimy and slippery and the water over the path is roughly three and a half feet deep.[1][N 1]

The stout door to the tower has a low lintel, and it can no longer be closed completely as its heavy oak planks have warped. It leads to a small, gloomy strongroom with a murder hole above it. Steps built into the inner wall of the tower curve away upward to the left to the upper stories, and downward to the right into an undervault; both directions are locked behind iron grates. The second floor of Queenscrown is a maze of small cells, the third floor has arrow slits, and the fourth has windows.[1]

The fifth floor is a large round chamber with arched doors on three sides which open onto small stone balconies. Along the fourth side is a privy chamber perched above a sewer chute that drops straight down into the lake. The north-facing balcony looks out toward the village. There is access to the roof, which gives a high view of the surrounding countryside. The northern mountains are visible to the south, as are the plains of the Gift in other directions, but the Wall is too far away to be seen.[1] According to Jon Snow there would have been a signalfire on the roof in case of a wildling attack.[3] The merlons atop Queenscrown are painted gold, but are now flaking,[1] and have faded to yellow.[3]

During a visit to the north,[N 2] Queen Alysanne Targaryen flew to the Wall on her dragon, Silverwing. She stayed at this holdfast on her way, so the villagers painted the merlons atop the tower gold in imitation of her crown to honor her.[3]

Queenscrown has been abandoned for many years, as many of the Gift's inhabitants have fled from wildlings.[1] 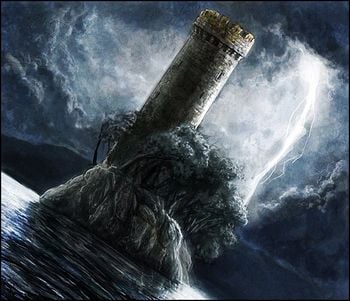 Bran Stark, Hodor, and Meera Reed and Jojen Reed stop at Queenscrown on their march to the Wall. The roofless inn is uninhabitable with a storm approaching, so they take refuge in the tower; Hodor nearly slips twice while they cross the causeway over the lake. As they wait out the storm, Hodor becomes frightened by lightning and thunder.[1]

While they wait out the storm, a traveling horseman takes shelter in the ruined inn. When Bran's party observes men entering the village, Bran enters Hodor's mind as a skinchanger to prevent the scared stableboy from alerting the strangers of their presence.[1] Unbeknownst to Bran, the newcomers are a party of wildlings who crossed the Wall at Greyguard.[3] Jon Snow, Bran's half-brother, is among the wildlings, who believe he has deserted the Night's Watch. Styr orders Jon to kill the traveler they captured in the inn, but the youth balks at murdering the old northman. Ygritte kills the man anyway with her knife.[3] Bran enters the mind of his direwolf, Summer,[7] and attacks in the dark, allowing Jon to escape,[3] although Summer is struck by an arrow.[7]

Two of the wildlings nearly drown while attempting to cross the causeway the next morning,[7] so Styr eventually has his wildlings depart for Castle Black.[8] The wounded Summer swims out to the island, allowing Meera to treat his wound with nearby plants. Bran and his companions wait another day and then continue north toward the Nightfort.[3]

Exploring the vicinity of Castle Black, Stannis Baratheon travels the kingsroad almost as far as Queenscrown.[9]

It was a peaceful spot, still and tranquil and lovely to behold, but Bran thought there was something sad about an empty inn, and Hodor seemed to feel it too.[1]

Jojen: Have you been here before, my prince?
Bran: No. Old Nan told me. The holdfast has a golden crown, see? Queen Alysanne slept there, so they painted the merlons gold in her honor.[1]

The holdfast did have a grim haunted look, standing there black against the storm on its rocky island with the rain lashing at the lake all around it.[3]


Ygritte: A queen lived there?


Jon: A queen stayed there for a night.[3]
—Ygritte and Jon Snow

Chapters that take place at Queenscrown