From A Wiki of Ice and Fire
(Redirected from New Gift)
Jump to: navigation, search
This article is about the region. For the television episode, see "The Gift". 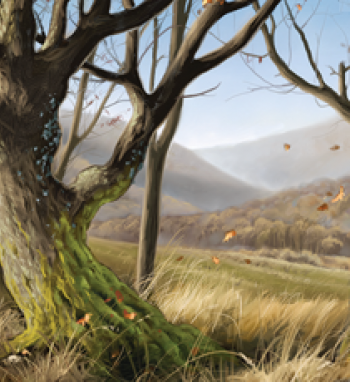 The Gift, consisting of Brandon's Gift and the New Gift, is the area in the north stretching fifty leagues south from the Wall, land given to the Night's Watch in perpetuity to support and aid the Watch.[1] It is under the protection of both the Watch and Winterfell.[2] The eastern lands of the Gift consist of large rolling plans that reach the Shivering Sea, while the western regions, which end at the Bay of Ice, are increasingly forested and mountainous.[3]

A Brandon Stark, usually mentioned as Bran the Builder but sometimes another Brandon, gave the land up to twenty-five leagues south of the Wall to the Night's Watch for their sustenance and support.[1] Brandon's Gift was farmed for thousands of years, but nature reclaimed many buildings and orchards as the Night's Watch decreased in number.[2] Compared to lands further south, the soil of Brandon's Gift is thin and stony.[4]

In 58 AC, King Jaehaerys I Targaryen and his sister-wife, Queen Alysanne Targaryen, made a royal progress to the north. Flying on her dragon, Silverwing, Alysanne visited Alaric Stark, the Lord of Winterfell who warmed to the queen during her stay at Winterfell, and then Lothor Burley, the Lord Commander of the Night's Watch at Castle Black.[4] Holding the Night's Watch in great esteem,[1] Alysanne felt Brandon's Gift was not sufficient to support the Night's Watch during her tour of the region. The queen suggested to Jaehaerys that he double the land by extending it a further twenty-five leagues south. Lord Alaric was wary of the idea of the New Gift, as the northmen who already held those lands would oppose having them taken away. According to Archmaester Gyldayn, the charming Alysanne eventually persuaded Lord Stark to agree to the plan,[4] and it is said that the Starks were glad to aid the Watch.[5]

According to Maester Yandel, however, the Starks were angered at being forced to surrender the territory, as they believed the Night's Watch would focus their attention beyond the Wall and would neglect the New Gift. The brother of a Lord Stark sought legal guidance from the maesters of the Citadel to avoid the forced donation to no avail. This resentment toward Jaehaerys and Alysanne might have contributed to Lord Ellard Stark supporting Lord Corlys Velaryon and Rhaenys Targaryen in the Great Council of 101 AC.[5]

The villages that exist in the New Gift pay their taxes in goods and labor to the Night's Watch, helping feed and provide food for the brothers. The New Gift contains many roundtowers, towerhouses, and holdfasts, such as Queenscrown.[1][2] Of the northern mountain clans, the Norreys live closest to the New Gift.[6]

The free folk often enter the Gift to raid, steal, and carry off women of the north.[1] In 133 AC, for instance, three thousand wildling raiders led by Sylas the Grim spread out across the Gift until being hunted down by Lord Cregan Stark, Flints, Glovers, Norreys, and rangers.[7] Because of the frequency of raids, many people have fled south into the mountains or the lands of House Umber east of the kingsroad, leaving the villages and holdfasts abandoned.[1]

Lord Eddard Stark has considered having new lords settle in the abandoned holdfasts of the Gift to protect against the raids. His brother Benjen Stark, the First Ranger, thinks the Lord Commander of the Night's Watch would approve the idea if the new lords pay taxes to Castle Black instead of Winterfell, but Eddard believes the plan would have to wait until after winter.[2]

The kingsroad through the Gift is used by Tyrion Lannister and Jon Snow.[8]

During their journey to find the three-eyed crow, Bran Stark and his companions seek refuge at Queenscrown in the New Gift, which Jojen Reed observes as having good land.[1] While they are hiding in the tower, they witness a fight between Jon Snow and Styr's party of wildling raiders.[1][2]

After the battle beneath the Wall, Stannis Baratheon informs Jon that he intends to settle wildlings in the Gift, if they swear fealty.[9] The officers of the Watch react negatively when Stannis makes his request.[10]

Jon, the new Lord Commander of the Night's Watch, agrees to allow Stannis to settle free folk on the Gift,[11] but the northern mountain clans are wary of the decision.[12]

Jon: The land belongs to the Watch.


Ygritte: No one lives here.
Jon: Your raiders drove them off.
Ygritte: They were cowards, then. If they wanted the land they should have stayed and fought.


Jon: Maybe they were tired of fighting. Tired of barring their doors every night and wondering if Rattleshirt or someone like him would break them down to carry off their wives. Tired of having their harvests stolen, and any valuables they might have. It's easier to move beyond the reach of raiders.[2]
—Jon Snow and Ygritte

This was the Gift, protected by the Night's Watch and the power of Winterfell. A man should have been free to build a fire here, without dying for it.[2]

Brandon: Lord Snow, where do you mean to put these wildlings o' yours? Not on my lands, I hope.
Torghen: Aye. You want them in the Gift, that's your folly, but see they don't wander off or I'll send you back their heads. Winter is nigh, I want no more mouths to feed.[12]