The mountain clans[1][2] or hill clans[3][4] are groups of northmen who dwell in the mountains north of Winterfell and in their foothills along the shore of the Bay of Ice.[5] Generally considered petty lords,[6] they should not be confused with the mountain clans of the Vale of Arryn, who are oft considered savages.[7] 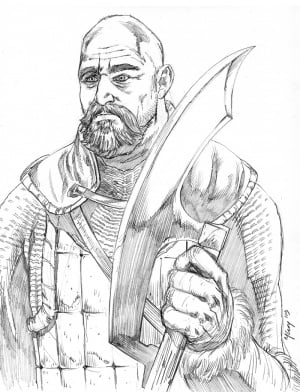 The quarrelsome clans of the rugged northwest are a hardy people who, like other northmen, claim descent from the First Men and worship the old gods. There are roughly forty mountain clans, large and small, the most prominent of which are the Wulls, the First Flints, the Norreys, the Burleys, the Harclays, the Liddles, and the Knotts. The most powerful of the clans are the Wulls.[5]

The Flints and Norreys live closest to the Gift, and are thus the most exposed to wildling raiders who cross the Gorge. Clan Norrey in particular is a noted friend of the Night's Watch. Living along the Bay of Ice, the Wulls and other clans have also clashed with the ironborn in the past. These threats and their own inter-clan feuds have instilled a fierce martial spirit in the mountain folk.

In battle, clan champions fight with huge two-handed greatswords or axes and sometimes armor themselves with mail byrnies.[1] The common men sling stones or wield staffs of mountain ash. Clansmen wear ragged skins and studded leathers;[8] Some disguise themselves with leaves and brush for arboreal fighting.[1] They breed hardy mounts in their high valleys and mountain meadows.

Although they do not consider themselves truly highborn, the chiefs of these clans are given the treatment of “lord” by their lieges, the Starks of Winterfell. Among themselves, the clansmen style their leaders as “the [clan name]”; i.e. the chieftain of Clan Liddle would be known as the Liddle. This practice extends to other usage; Lord Eddard Stark is called “the Ned” by the clans.[9] This tradition seems to stem from the First Men, as it is also practiced by House Stark ("the Stark in Winterfell")[10] and some noble houses among the ironborn,[11] and some tribes of free folk (referring to Mance Rayder as "The Mance").[12]

Given their high latitude and sparse resources, the clans suffer population strain during winter years. The young are sent to the Starks' winter town, and old men often announce that they are “going hunting.” Some are found the next spring; more are never seen again.[8]

According to Lord Roose Bolton, some of the mountain clans still continue the tradition of the first night.[2]

Of First Men origin, the clansmen have inhabited the mountains north of the wolfswood for thousands of years. They were eventually included within the domain of the Kings of Winter from House Stark of Winterfell.[5]

The clans have often quarreled with each other, leading the Starks to settle the disputes by force or by calling the chiefs to Winterfell. These feuds are recalled in songs, such as "Black Pines" and "Wolves in the Hills". The clans' territory has also been historically raided by wildlings and ironborn.[5]

The clans have not been visited by a king in centuries, as Torrhen Stark, King in the North, knelt to Aegon I Targaryen during Aegon's Conquest.[6]

While traveling through the northern mountains toward the Wall, Bran Stark tells Meera and Jojen Reed that the hills and mountains are inhabited. They meet a a Liddle during their journey.[13]

Clansmen fight for Robb Stark, King in the North, during the War of the Five Kings. Norreys and Burleys participate in the fighting at the fords of the Trident.[14] Arya Stark notes men of the mountain clans in the camps outside the Twins.[15] Owen Norrey is slain at the Red Wedding.[16]

Maester Aemon sends ravens to the Burleys, the Harclays, the Liddles, the Norreys, and the Wulls asking for aid against the wildling host of Mance Rayder.[17]

After the War of the Five Kings, Jon Snow, Lord Commander of the Night's Watch estimates the clans could muster two or three thousand fighting men. Rather than attack the Dreadfort, Jon advises Stannis Baratheon to seek the aid of the clansmen.[6]

When Stannis tries to curry favor with the northern lords by freeing their western strongholds from the ironborn, he begins by enlisting the aid of Old Torghen Flint and Hugo “Big Bucket” Wull. Stannis is the first king the clans have seen since Torrhen Stark knelt before Aegon the Conqueror.[6][9]

By observing the courtesies suggested by Jon, Stannis is able to rally the mountain folk and liberate Deepwood, earning the loyalty of Houses Glover and Mormont.[1][9] During the army's snow-plagued march on Winterfell to take the castle from House Bolton, Stannis's southron knights struggle to survive, while the snowshoe-clad clansmen are able to soldier on with relative ease. They remain fiercely loyal to the memory of "the Ned" and want to free "Arya Stark" (actually Jeyne Poole).[9][4]

Old Flint and The Norrey travel to Castle Black to attend the wedding of Alys Karstark and Sigorn.[8]

Stannis: Those mountains? I see no castles marked there. No roads, no towns, no villages.
Jon: The map is not the land, my father often said. Men have lived in the high valleys and mountain meadows for thousands of years, ruled by their clan chiefs. Petty lords, you would call them, though they do not use such titles amongst themselves. Clan champions fight with huge two-handed greatswords, while the common men sling stones and batter one another with staffs of mountain ash. A quarrelsome folk, it must be said. When they are not fighting one another, they tend their herds, fish the Bay of Ice, and breed the hardiest mounts you'll ever ride."[6]