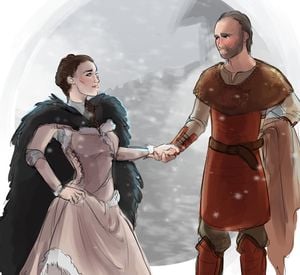 Melisandre is conducting the marriage ceremony between Alys Karstark and Sigorn, the new Magnar of Thenn. Only a few brothers of the Night's Watch attend, along with Queen Selyse, her queen's men, and a few king's men that Stannis Baratheon left behind. Meanwhile, Jon Snow has ordered Clydas to dispatch a raven to Deepwood Motte in order to warn Stannis of Arnolf Karstark's treachery.[1]

Cregan Karstark followed his niece Alys to Castle Black a day after her arrival. Jon met him before he could reach the fortress and imprisoned Cregan and his men in the ice cells at the Wall. Knowing that Stannis will execute Cregan when he learns of the betrayal, Jon tries to get Cregan to take the black and accept Alys's claim to Karhold. Cregan will not hear about it, but Jon thinks time spent in the ice cell might change his mind.

At Alys and Sigorn's wedding feast, a raven brings message that the relief fleet for Hardhome, delayed due to the bad weather, has now left Eastwatch-by-the-Sea. Cotter Pyke is commanding the fleet and he left behind Glendon Hewett in charge of Eastwatch. Jon is unsure of Glendon's loyalty due to his association with Janos Slynt and Alliser Thorne. Axell Florent once again presses Jon to release the whereabouts of Val, as he intends to marry her, but Jon scoffs at the idea. The wedding feast comes to an abrupt end when a horn is sounded twice, announcing wildlings. Jon knows that Val has succeeded in her mission, and that Tormund Giantsbane has come at last.[2]