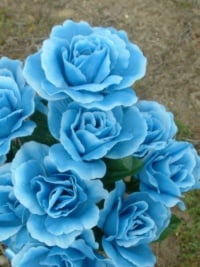 The winter rose is a pale blue flower the color of frost.[1] The rare rose is said to be the most beautiful of the flowers grown in the glass gardens of Winterfell.[2]

According to legend, Bael the Bard climbed the Wall, took the kingsroad, and entered Winterfell as a singer under the name Sygerrik of Skagos. There he sang until midnight for Lord Brandon Stark. Impressed by Bael's skills as a singer, Brandon asked him what he wanted as a reward. Bael answered by requesting the most beautiful flower blooming in Winterfell's gardens. As the blue winter roses were just blooming, Brandon agreed to offer him one. The following morning the single virgin daughter of the lord had disappeared. In her bed was the rose Bael had received from her father.[2]

Lyanna Stark loved the scent of blue winter roses.[1] During the tourney at Harrenhal, Prince Rhaegar Targaryen named Lyanna the queen of love and beauty instead of his wife, Elia Martell, giving Lyanna a garland of blue roses.[1][3] 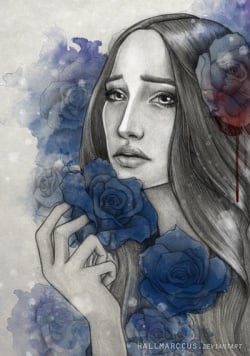 Eddard Stark recalls that when his sister Lyanna died, rose petals spilled from her palm, now dead and black.[4] In a fever dream about the combat at the tower of joy, Eddard sees blue rose petals blowing across the sky.[5] In a later dream, the statue of Lyanna Stark in the crypt of Winterfell has a garland of pale blue roses.[6]

While in the House of the Undying in Qarth, Daenerys Targaryen has a vision of a sweet-scented blue flower growing from a chink in a wall of ice.[7]

The wildling Ygritte tells Jon Snow of Bael the Bard, a legendary King-Beyond-the-Wall, a story she calls "the song o' the winter rose."[2]

After capturing Winterfell, Theon Greyjoy dreams of the feast that Eddard held for King Robert I Baratheon at Winterfell, except the feasters are all dead. Although he never met her, Theon thinks his vision of a slim, sad girl wearing a crown of pale blue roses can only be Lyanna.[8]

As they came together in a rush of steel and shadow, he could hear Lyanna screaming. "Eddard!" she called. A storm of rose petals blew across a blood-streaked sky, as blue as the eyes of death.[5]

Ned remembered the moment when all the smiles died, when Prince Rhaegar Targaryen urged his horse past his own wife, the Dornish princess Elia Martell, to lay the queen of beauty's laurel in Lyanna's lap. He could see it still: a crown of winter roses, blue as frost. Ned Stark reached out his hand to grasp the flowery crown, but beneath the pale blue petals the thorns lay hidden. He felt them clawing at his skin, sharp and cruel, saw the slow trickle of blood run down his fingers, and woke, trembling, in the dark.[1]

Ygritte: And she never sung you the song o' the winter rose?
Jon: I never knew my mother. Or any such song.[2]

Now as it happened the winter roses had only then come into bloom, and no flower is so rare nor precious.[2]