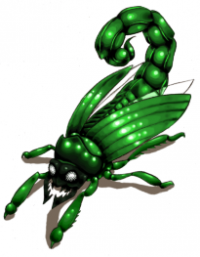 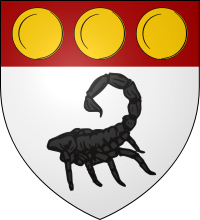 Manticore as the sigil of House Lorch

The manticore is an insect that lives in the islands of the Jade Sea,[1] especially the Manticore Isles, where the creatures are said to be numerous.[2] Depictions of manticores are relatively common in Valyrian statuary[3][4] and other statuary of Essos.[5][6] A black manticore is the charge on the arms of House Lorch.[7]

The manticore has a jewel-like carapace,[8] an arched barbed tail, and an unsettling human-like face, malign and black. Manticores make a hissing sound, and can fold up into the shape of a scarab.[6] Their poisonous sting is fatal to humans, with venom that kills the instant it reaches the heart.[9]

Living specimens of manticores are traded throughout Essos, and can be found in market stalls at Vaes Dothrak,[10] as well as the menagerie of the Palace of the Sealord of Braavos.[11] In Westeros, manticores are sometimes believed to be mythical.[12]

Among the Dothraki-pillaged statues of deities at Vaes Dothrak, Daenerys Targaryen sees statues of manticores, with their barbed tails poised to strike.[5]

Syrio Forel tells Arya Stark that the menagerie of the Sealord of Braavos includes manticores.[11]

In the Eastern Market of Vaes Dothrak, Daenerys sees manticores in silver cages.[10] 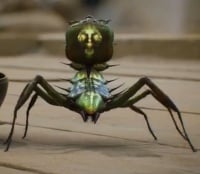 Manticore on Game of Thrones.

Daenerys sees that Qarth has many elaborate fountains, including those wrought in the shapes of manticores.[6]

A Sorrowful Man attempts to kill Daenerys at the Port of Qarth using a manticore, initially presented to her as a jeweled scarab. He is thwarted by Arstan Whitebeard.[6]

Davos Seaworth sees manticores among the gargoyles that adorn the fortress of Dragonstone.[3]

Qyburn claims that the poison Oberyn Martell coated his spear with and used against Gregor Clegane was manticore venom, but thickened somehow, possibly with sorcery. Instead of killing instantly when it reaches the heart, the modified venom leaves Clegane to die slowly and in extreme agony.[9]

Tyrion Lannister sees that the gateway to the Long Bridge of Volantis is carved with all kinds of strange creatures, including manticores.[4]

In the Great Pyramid of Meereen, a Brazen Beast guarding the gates wears a manticore mask.[14]