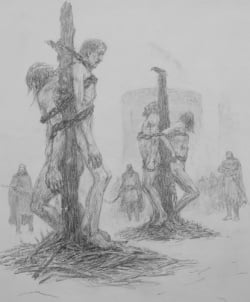 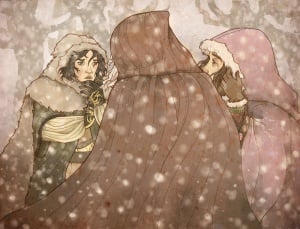 Asha Greyjoy is still a prisoner of Stannis Baratheon at the crofters' village between the lakes, being guarded by Alysane Mormont. While they thought they would be only three days from Winterfell, the snows have kept them stranded for nineteen days. Food has become a major concern. The supply of fish from the lake has been diminishing, they have already been relying on their dying horses as a source of food for a while now, and foraging has brought little result. Some men have even begun to resort to cannibalism: four men from House Peasebury were caught eating parts of a dead man from House Fell.

Fueling those tensions, Ser Godry Farring the Giantslayer, Ser Corliss Penny and Ser Clayton Suggs are about to burn the four cannibals in sacrifice for R'hllor, hoping to stope the snowfall. Northerners Artos Flint and Big Bucket Wull express dislike of the sacrifice. Asha has noticed that Clayton Suggs is a cruel man and fears that he may eventually turn against her.

Stannis himself has been retreating to a tower roof with a perennial flame for four days, since his squire Bryen Farring was given a funeral burning after dying from the cold. He returns now, along with Queen's Man Ser Richard Horpe and Karhold's castellan Arnolf Karstark, whose men joined theirs eight days past. There are rumors that Arnolf may hold Winterfell in Stannis' behest if they are successful at retaking the castle. Stannis authorizes the sacrifice and watches it until its end.[1]

Ser Justin Massey remains close to Asha and protects her from the worst of Clayton Suggs' threats. He also reveals that he is no longer a true believer in R'hllor and hints that he knows more than he is telling.

Justin offers to guard Asha for a while, relieving Aly Mormont from that duty. The two of them eat some roasted horse in the hall. Stannis' knights are however lost by a lack of options, knowing that they are likely to die soon no matter what they do, since they have no food nor are they in any condition to fight Roose Bolton's forces at Winterfell. Talk is tense and frustrated, and eventually Justin leaves the Hall. Attempting to follow him, Asha finds Clayton Suggs instead. He threatens her, but the two of them are surprised to find that riders are coming to Stannis' encampment.

Assuming that this is an attack from the Boltons and Freys, Clayton commands Asha to warn the others while he alone attempts to delay the riders. But there is no immediate danger, for the riders are not hostile. It is instead the group of Tycho Nestoris, representative of the Iron Bank of Braavos, with two men of the Night's Watch and the seven ironmen that he ransomed from Sybelle Locke. Asha recognizes Tristifer Botley among them.

The group has come by way of Winterfell, where they found Crowfood Umber beating drums and blowing horns, and have brought Theon and Jeyne from Winterfell.

Jeyne's nose is black from frostbite, and no one has referred to her by name yet, so it is not clear whether Tycho's group knows that she is not Arya Stark. Asha fails to recognize Theon, who looks decades older than she knows him to be. Theon, however, reveals his identity to Asha, much to her shock.