The heart of the Great Pyramid is located deep within the center of the massive structure. Massive brick walls surround a suite of windowless rooms buried in the very heart of the pyramid on the sixteenth and seventeenth levels.[1][2] Hizdahr zo Loraq and the cupbearers of Daenerys Targaryen take up residence here during Queen Daenerys Targaryen's absence.

King Hizdahr zo Loraq's chambers in the heart of the pyramid are dark and windowless and surrounded on all sides by brick walls 8 feet thick (2, 44 meters).[1]

The door of the King’s apartments have a slidehole.[2] A heavy bar bars the door when it is shut. Inside, the apartments are large and luxurious, the floors covered with silk carpets out of Qarth. Great beams of black oak support the high ceilings.[2] On the walls are priceless tapestries, which are ancient and much faded and depict the glory of the Ghiscari Empire. The largest of them show the last survivors of a defeated Valyrian army passing beneath the yoke and being chained.[2]

The archway leading to the royal bedchamber is guarded by a pair of sandalwood lovers, shaped and smoothed and oiled. Ser Barristan Selmy finds them distasteful.[2] The archway connects the bedchamber with the location intended for the cupbearers and various visitors. An iron brazier is there to give light. There is a bench to sit on and a sideboard where Hizdahr zo Loraq keeps a flagon of wine.[2]

A thin and nearly-transparent silk curtain stands at the entrance of the archway. It allows a person standing in the archway to examine visitors without stepping outside to meet them, but offers little protection from prying eyes.[2]

Hizdahr keeps two men by him when he sleeps. One on the door of his bedchamber and a second within in an adjoining alcove.[2] 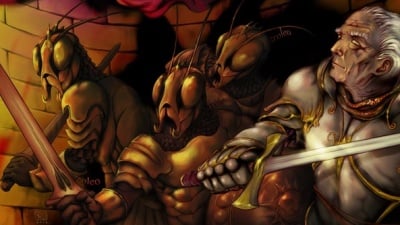 Ser Barristan Selmy goes to the heart of the Great Pyramid and places Hizdahr zo Loraq under arrest. He tells him that he will be kept prisoner until the queen returns. Ser Barristan gives his word as a knight to Hizdahr that if nothing can be proved against him he will not come to harm.[2]