A Clash of Kings-Chapter 21

Acting as Lord of Winterfell, Bran hosts the harvest feast and greets Meera and Jojen Reed, who arrive to represent their father Howland Reed.That night, Bran dreams of the Reeds visiting the direwolves in the godswood.

Bran rides his horse Dancer into the Great Hall of Winterfell for the harvest feast. He wishes Summer was with him, but Ser Rodrik Cassel was unyielding. From the crowded benches, men shout "Stark!" and "Winterfell!" as he passes. Bran knows they are cheering for the harvest, for victory, and for all the Starks who came before rather than for him, but he still swells with pride and even forgets he is broken until he reaches the dais. There Osha and Hodor unstrap him and carry him to the high seat. Ser Rodrik, his daughter Beth, and Maester Luwin are seated to Bran's left and Rickon to his right, his hair uncut since their mother left because he bit the last girl to try. After Ser Rodrik bellows for quiet, Bran welcomes the guests and asks them to thank the gods for Robb's victories and the bountiful harvest. His toast of "May there be a hundred more," brings an echoing cheer and Ser Rodrik says his father would be proud.

They feast on course after course, including seafood brought by Lord Wyman Manderly from White Harbor. Manderly has also brought musicians, but only Hodor seems to be listening and the songs are drowned beneath the talk and laughter. Ser Rodrik and Maester Luwin talk over Beth's head, while Rickon screams happily with Little Walder and Big Walder. Bran did not want the Walders at the high table but Maester Luwin reminded him they would become kin when Robb weds one of their aunts and Arya marries their uncle Elmar Frey, though Bran argued Arya would never stand for that.

Each dish is served to Bran first, and soon he is full and must nod approval rather than taste everything. As instructed, he sends particularly delicious dishes to the lords as a gesture of friendship: salmon to sad Lady Donella Hornwood, boar to Mors and Hother Umber, goose-in-berries to Cley Cerwyn, lobster to Joseth the master of horse for training Dancer, sweets to Hodor and Old Nan because he loves them, and beets and turnips to the Walders because Ser Rodrik insists he give them something.

Bran watches the feast detachedly, seeing everything yet a part of nothing. He sees Osha break a flagon over the head of a Tallhart man for sliding his hand under her skirts, though another woman does not seem to mind Mikken's hand down her bodice. He watches Farlen make his red bitch beg and Old Nan pluck at the crust of a hot pie. On the dais, he sees Lord Manderly attacking a plate of lampreys in his special wide chair, sad Lady Hornwood picking listlessly at her food, and the Umber brothers playing a drinking game.

The heat and noise soon grow too much and Bran finds himself dreaming of the cool in the godswood. Studying his father's ornate goblet, Bran recalls the welcoming feast for King Robert and realizes everyone else is gone—either to war, captivity, the Wall, or their graves. Even the men at the tables are new, since everyone who went south with his father is dead and the rest rode to war with Robb. When he wonders who will be missing next year and the year after, Bran feels like crying but reminds himself he is the Stark in Winterfell and almost a man grown. 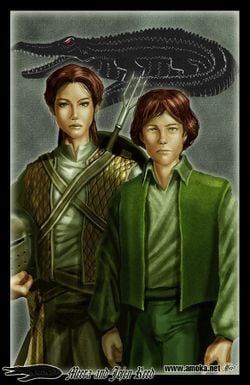 The doors to the hall open and Alebelly leads in two new guests: Meera and Jojen Reed of Greywater Watch. Bran recognizes them as crannogmen from the Neck, a shy and simple folk who rarely leave their swamps, but he hears Little Walder calling them "mudmen" and explaining to Rickon that they are thieves and cravens with green teeth from eating frogs. As places are hurriedly prepared on the dais, Ser Rodrik explains that these must be the children of Howland Reed, a great friend and staunch companion of Bran's father during Robert's Rebellion.

The slender girl Meera is armed with woven net, bronze knife, and frog spear as well as an iron helm, leather shield, and bronze-scale jerkin. Her younger brother Jojen is unarmed and dressed all in green, which brings out the deep green of his eyes. Kneeling before the dais, the Reeds explain that they have come to renew House Reed's fealty to the King in the North. Bran explains that Robb is away fighting but says they may say their words to him. Together, the Reeds recite their ancient oath, swearing by earth and water, by bronze and iron, and by ice and fire never to fail the Starks of Winterfell. Unsure how to respond, Bran finally decides on "May your winters be short and your summers bountiful," and bids them rise. Meera offers gifts of fish, frog, and fowl, and Bran offers them the meat and mead of Winterfell in return.

Jojen immediately asks where the direwolves are and Rickon answers that they are in the godswood because Shaggydog was bad. When Meera says that Jojen would like to see them, Little Walder warns that they will bite. Pleased by the Reeds' interest, Bran promises that Summer at least will not bite and will keep Shaggydog away. He cannot recall ever meeting a crannogman and would like to talk more, but the feast is too noisy. When he learns from Ser Rodrik that they truly eat frogs, Bran sends the Reeds mutton, aurochs, and beef stew, which they seem to like. When Meera catches him staring, Bran blushes.

After the tables are cleared away, the music and singing grows wilder. Mors Umber grabs a passing serving girl and begins whirling her about the floor and others soon join in. Hodor dances by himself, while Wyman Manderly and then Cley Cerwyn partner with little Beth Cassel. Ser Rodrik approaches Lady Hornwood, but she excuses herself. Once again unable to participate, Bran watches long enough to be polite, then calls Hodor to carry him to bed, conscious of the stares of onlookers.

Just outside the hall, they come upon Joseth and giggling woman with her skirts above her waist. The girl screams when she sees Hodor watching, so Bran has to tell him to leave them be. After getting help with his boots and breeches, Bran dismisses Hodor and lies down to sleep. Then he recalls his father telling him the Kingsguard were once a shining example, and the finest knight he ever saw was Ser Arthur Dayne, who would have killed him but for Howland Reed. His father became sad at that and spoke no further, but now Bran wishes he had asked what he meant.

Bran goes to sleep thinking of knights, but his dreams are of wolves in the godswood again and he can hear and smell the feast still going on. At the rattle of iron, he and his brother race to confront the strange intruders: a female and a young male with no taint of fear. Bran recognizes Meera's voice when she asks if Jojen knew the wolves would be so big. Jojen points out they are still growing and opines that Shaggydog is full of fear and rage but Summer is stronger than he knows. Meera cautions her brother, but Jojen insists this is not the day he dies and reaches out to touch Summer. At his touch, Bran loses contact and suddenly feels he is falling again.