From A Wiki of Ice and Fire
(Redirected from The Neck)
Jump to: navigation, search

Neck
The north and the location of the Neck

The Neck is one of the southernmost regions of the north. Covered in swamp and bog, it divides the north from the rest of the Seven Kingdoms.[1] West of the Neck is a large forest and a peninsula containing Flint's Finger, the Flint Cliffs, and Cape Kraken, while to the east is the Bite. North of the Neck are the barrowlands, while to the south are the Twins, Seagard, and the Cape of Eagles in the riverlands. The Green Fork of the Trident originates in the Neck.[2] Swamps of the Neck, by Darek Zabrocki © Fantasy Flight Games

The black bog of the Neck contains lizard-lions, snakes, and dozens of varieties of huge flowers (including poison kisses). Dense thickets of trees are half-drowned and covered in pale fungus, and beneath the water, quicksand will drown anyone who attempts to walk the waters.[3] The Neck is considered the key to any assault on the north.[4]

The kingsroad passes through the Neck. Due to the difficult terrain it becomes the narrow causeway, which is the only safe route to travel through the swamps of the Neck during times of peace. At the northern end of the causeway stand the formidable ruins of Moat Cailin.[5]

The Neck is inhabited by crannogmen, who are led by House Reed of Greywater Watch. Crannogmen are often looked down upon by other Westerosi, including neighboring rivermen.[6] The ironborn refer to the crannogmen as bog devils.[5]

According to legend, the Neck turned into a swamp when greenseers used the hammer of the waters. Some maesters instead believe the landscape was caused by a natural event.[7]

The Neck was originally an independent realm ruled by the Marsh Kings, until King Rickard Stark of Winterfell defeated the last Marsh King and married his daughter, annexing the Neck to the domain of the Kings of Winter.[8] House Stark was able to preserve northern independence by holding the Neck and Moat Cailin. Some children of the forest may have fled to the Neck during the coming of the Andals.[9]

King Benedict the Just, founder of House Justman, extended his domains to border the Neck during his long reign.[10] 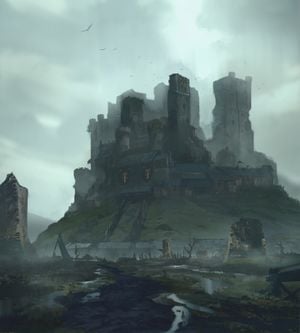 During Aegon's Conquest, Torrhen Stark, King in the North marched an army of thirty thousand south through the Neck to the Trident,[11] but he ultimately choose to kneel in submission to Aegon I Targaryen.[12]

Orchards were planted throughout southern Westeros from the Reach to the Neck during the reign of King Jaehaerys I Targaryen.[13] The right of the first night, an ancient custom of the First Men, was rarely practiced south of the Neck during Jaehaerys's time, but it was more common in the north. Queen Alysanne Targaryen convinced Jaehaerys to outlaw the first night throughout the Seven Kingdoms.[13] Jaehaerys commanded the construction of the kingsroad to connect Storm's End with the Wall,[14] with the portion running through the Neck becoming known as the causeway.[3]

During the Dance of the Dragons, Lord Cregan Stark marched a great host down the Neck to oppose Aegon II Targaryen in support of first Rhaenyra Targaryen and then her son, Aegon III Targaryen.[15]

The retinue of King Robert I Baratheon traverses the Neck by taking the causeway; the southern leg takes twelve days of travel.[3]

Robb Stark sends word to Lord Howland Reed to have the crannogmen defend the Neck against the Lannisters.[18] Robb's host of northmen marches from Winterfell to Moat Cailin, and then through the Neck to the Twins.[19]

Meera and Jojen Reed in the Neck, by Amok ©

Avoiding the Neck, the Iron Fleet under Victarion Greyjoy sail the Fever River and seize Moat Cailin from the north, claiming it for Balon Greyjoy, King of the Isles and the North.[20][21]

As part of his plan to retake Moat Cailin after the death of Balon, Robb orders Galbart Glover and Maege Mormont to Seagard. They are then to sail up the Neck on Mallister longships to find Greywater Watch so that the crannogmen can direct Robb's army around the rear of the ancient fortress.[22] Robb's plan is ruined by the Red Wedding, however.

Black Walder Frey tracks a hooded woman's outlaws north of Hag's Mire until they disappear into the Neck.[23]

The ironborn garrison at Moat Cailin is weakened by guerrilla warfare conducted by the crannogmen. The host of Lord Roose Bolton travels through the Neck and past Moat Cailin after it is surrendered to his son, Ramsay.[5]

They had been twelve days crossing the Neck, rumbling down a crooked causeway through an endless black bog, and she had hated every moment of it.[3]

When we were crossing the Neck, I counted thirty-six flowers I never saw before, and Mycah showed me a lizard-lion.[3]

Two hundred determined archers can hold the Neck against an army.[24]

A dozen streams drain the wetwood, all shallow, silty, and uncharted. I would not even call them rivers. The channels are ever drifting and changing. There are endless sandbars, deadfalls, and tangles of rotting trees. And Greywater Watch moves.[22]