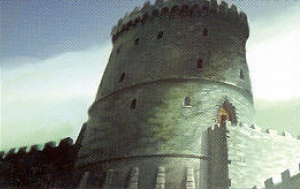 White Sword Tower is one of the towers of the Red Keep in King's Landing. It contains the chambers of the Kingsguard.

White Sword Tower is a slender four-storied structure built into an angle of the castle wall overlooking Blackwater Bay. It has winding steps.[1]

The first floor contains the common room for the Kingsguard, the Round Room, a circular white room. White wool hangings decorate its whitewashed stone walls, and a white shield and two crossed longswords are mounted over the hearth. The room contains a large weirwood table carved in the shape of a shield supported by three white stallions, and three knights sit on each side. The chair of the Lord Commander, old black oak with blanched cowhide cushions, sits at the top of the shield.[1] The common room also contains the White Book.[1]

The undercroft holds arms and armor, while the second and third floors hold the small sparse sleeping cells for six brothers of the Kingsguard. The topmost floor contains the apartments of the Lord Commander. His rooms are sparse as well, but spacious, and they stand above the outer walls.[1] His wall hangings and bed draperies are white.[2]

When she was ten years old, Princess Saera Targaryen slipped into White Sword Tower, stole all the white cloaks she could find, and dyed them pink.[3]

According to Mushroom, Princess Rhaenyra Targaryen attempted to seduce Ser Criston Cole, Lord Commander of the Kingsguard, in White Sword Tower. Criston rejected her, however, so Rhaenyra then slept with Ser Harwin Strong.[4][5]

Ser Mervyn Flowers, a kingsguard for King Aegon III Targaryen during his regency, slept with washerwomen and serving girls in his cell at White Sword Tower.[6]

In the aftermath of the secret siege, Ser Marston Waters confronted Ser Mervyn, who mortally wounded him. Ser Marston was later found in a pool of his own blood in White Sword Tower. He was carried to Grand Maester Munkun who was not able to save him. Marston died in the night.[7]

Ser Jaime Lannister, now Lord Commander of the Kingsguard, visits White Sword Tower for the first time since his return to King's Landing during the War of the Five Kings. Jaime notices that Ser Barristan Selmy, his predecessor as Lord Commander, had updated the White Book before he left the Red Keep. Jaime then questions the Kingsguard under his command in the common room.[1]

After Steelshanks Walton departs the capital with "Arya Stark", Jaime is surprised to find his sister, Queen Cersei Lannister, waiting in his apartments. Cersei wants Jaime to renounce his vows and attempts to seduce him, but she angrily departs after he refuses. Jaime then has Ser Loras Tyrell bring Brienne of Tarth to the Round Room, where he gives her Oathkeeper and tasks her with finding Sansa Stark.[2]

Jaime discusses the history of the Kingsguard with Loras in the common room.[8]

A white book sat on a white table in a white room.[1]

I had no home but White Sword Tower.[9]