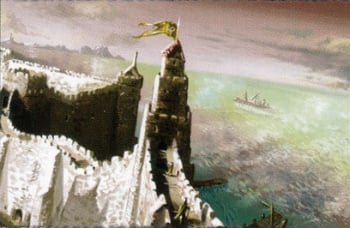 Blackwater Bay is a large body of water along the crownlands in eastern Westeros. King's Landing, the capital of the Seven Kingdoms, sits where the Blackwater Rush pours into the bay.[1] "Waters" is a common bastard name around Blackwater Bay.[2]

Blackwater Bay is an inlet of the narrow sea, separated from it by the Gullet, held between the arms of Crackclaw Point to the north and Massey's Hook to the south, with the island of Dragonstone guarding the entrance to the bay. Massey's Hook shields against the rougher narrow sea, so Blackwater Bay has calmer waters.[3] Elements of the Iron Throne's royal fleet patrol the bay and ensure it is kept free from piracy.

Aside from King's Landing and Dragonstone, the largest port on the bay is Duskendale, which serves as a secondary port for King's Landing when the main port is overwhelmed with traffic. Rook's Rest is located on the northern shore of the bay and Sharp Point is to the east at the tip of Massey's Hook. The kingswood extends along the southern shore of Blackwater Bay, with the Wendwater flowing into the bay.[4]

The largest island is Driftmark, on which is located Hull. House Velaryon, the Masters of Driftmark, are a historical naval power who style themselves the Lords of the Tides.[5]

A unique geological feature called the spears of the merling king sits within the bay. Within the spears, the currents are strong and treacherous.[6] Waterfowl are abundant in marshes along Blackwater Bay,[7] and the body of water also contains codfish.[8][9]

The shores of Blackwater Bay were historically disputed by river kings,[10] Storm Kings,[11] Kings of the Isles and the Rivers,[5] and kings from House Darklyn of Duskendale and House Massey of Stonedance.[5]

Prior to Aegon's Conquest, House Targaryen of Dragonstone and House Velaryon of Driftmark prospered from their control of the Gullet, which divided the bay from the narrow sea.[12]

During the Dance of the Dragons, the blacks blockaded Blackwater Bay by closing the Gullet with the fleet of Lord Corlys Velaryon. The greens eventually defeated the blockade in the Battle of the Gullet, however, and sacked Spicetown so severely it was never rebuilt.[8]

The Battle of the Blackwater occurs at the mouth of the Blackwater Rush where it meets the bay. This battle pits the forces loyal to Stannis Baratheon against those loyal to Joffrey Baratheon. Tyrion Lannister, the acting Hand of the King at the time, devises a system with a chain boom pulled across where the river widens into the bay. This chain is raised once the majority of Stannis's fleet is up river and wildfire is deployed to ignite many of the ships. The current pulls these burning ships towards the mouth of the river and against the chain, which results in the destruction of much of the fleet. Salladhor Saan's galleys remain outside of the chain in the bay.[3]

Salladhor is named the Lord of Blackwater Bay by Alester Florent, the Hand of the King of Stannis.[13]

After the death of King Joffrey I Baratheon at his royal wedding, Sansa Stark and Petyr Baelish escape King's Landing by sailing aboard the Merling King into the fog of Blackwater Bay.[14]

The Redwyne fleet transports two thousand westermen across Blackwater Bay for the siege of Dragonstone.[15][16]

Salladhor, titular lord of the bay, abandons the cause of Stannis to return to the Stepstones.[18]