Alester Florent is the Lord of Brightwater Keep and the head of House Florent, sworn to House Tyrell of Highgarden.[5] He is married to Lady Melara Crane and they have three children, Alekyne, Melessa, and Rhea. His niece, Selyse, is married to Stannis Baratheon, Lord of Dragonstone.[5]

Alester is an older man in his middle years,[3] tall and slender.[6] His long, elegant face has silvery grey hair and a pointed beard.[6] He appears pale and pampered.[6]

Alester is an influential man, wealthy and powerful.[1] The courtly lord considers himself to be a man of honor, but some consider him ambitious.[1][3]

In battle Lord Florent wears red-gold armor,[6] the shining snout of a red-gold fox poking out of his breastplate, surrounded by a circle of lapis lazuli flowers—the sigil of House Florent.[1] Alester also owns a slashed velvet doublet and jeweled cloak.[6]

Alester was born at Brightwater Keep.[3] He and a Tarly were once unhorsed in the same tourney by Ser Denys Mallister.[7] 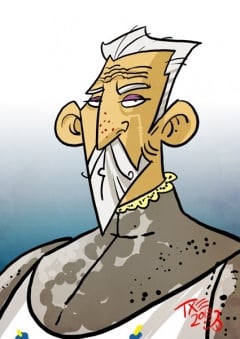 Lord Alester Florent by The Mico ©

When Lord Stannis Baratheon declares himself King of Westeros, his wife Selyse believes that her uncle, Lord Alester, and her brothers will pledge their swords to his cause. Stannis believes otherwise, as Florent lands lie too close to Highgarden for Lord Alester to risk the wrath of Lord Mace Tyrell.[8]

After Renly's death, Lord Florent believes it was Lady Catelyn Stark who slew the king.[1] Allister rallies his banners and is the first of those who swore to Renly to go over to Stannis's cause.[11] He is also the first of the new lords to discard the Faith of the Seven and take up the worship of R'hllor, and he becomes a leader of the queen's men.[1]

When Stannis's host resumes the siege of Storm's End, the castle's castellan, Ser Cortnay Penrose, accuses Lord Florent of being a turncloak. Alester urges Stannis to bring old Lord Penrose to the castle and hang him before his son.[1]

Stannis gives command of his royal fleet to Alester's nephew, Ser Imry,[12] and the Florent banners are seen outside King's Landing when Stannis's vanguard arrives.[13] Stannis's host is defeated in the Battle of the Blackwater,[14] however, and Alester flees when Lannisters overrun his camp.[2]

For their support of Stannis, the Florents are stripped of Brightwater Keep by the Iron Throne, with their lands instead being granted to Ser Garlan Tyrell.[15]

Lord Alester becomes Hand of the King,[2] in part because he is Selyse's uncle.[3] After Stannis's defeat at the Blackwater, it is left to Selyse and Alester to rule in Stannis's name while the king broods. Alester is given the king's seal by Selyse to speak in Stannis's name.[2] When Maester Pylos shows Alester a request from the Night's Watch for aid against a wildling host, Alester dismisses the plea for help because Stannis lacks manpower.[16] Alester advises his brother, Ser Axell Florent, the castellan of Dragonstone, against the idea of Stannis and Melisandre to wake a stone dragon.[6]

Alester tries to make peace with House Lannister by having Stannis give up his claim to the Iron Throne in exchange for him being named Lord of Storm's End and Dragonstone, with Alester vowing to do the same in exchange for Brightwater Keep and all his lands. He offers to seal the bargain by wedding Stannis's daughter Shireen to Prince Tommen Baratheon. However, Alester's plans are discovered by the queen's men and Stannis is furious with the terms. For his accused treason, Alester is imprisoned in the same cell in Dragonstone's dungeons as Ser Davos Seaworth.[6]

When Davos is retrieved from the dungeons, Axell denounces his brother as a traitor and takes the torch from his cell, causing Alester to appeal to the gods. Axell desires for Alester and Davos to be burned as traitors. Stannis, however, names Davos as his new King's Hand.[17]

Ser Denys Mallister recalls that he once unhorsed both of Samwell Tarly's grandfathers in the same tourney.[7] 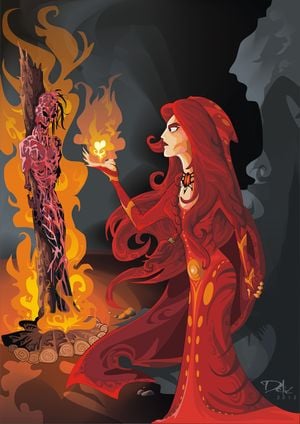 Lord Alester is reported to have been sacrificed by Melisandre to R'hllor as a traitor.[18] His son Alekyne succeeds him as the attained Lord of Brightwater Keep, though he has fled to Oldtown.[18]

Ser Davos recalls that when Stannis decided to aid the Night's Watch at the Wall, Melisandre burned Alester alive in order to obtain favorable winds for their expedition to Eastwatch-by-the-Sea. When bound to a post, Lord Florent had been silent and dignified, but as the flames began to touch him, he began to scream.[4]

Alester: You know me for a man of honor—
Cortnay: I know you for a man of ambition, a man who changes kings and gods the way I change my boots.[1]

Alester: My chests were lost when the Lannisters overran our camp. I escaped with no more than the mail on my back and the rings on my fingers. No doubt some cook's boy or groom is prancing around King's Landing just now in my slashed velvet doublet and jeweled cloak. But war has its horrors, as all men know. No doubt you suffered your own losses.


Alester: May the ... may the Lord of Light lead them through the darkness to a better world.[6]
—Alester and Davos Seaworth

Stannis Baratheon will never sit the Iron Throne. Is it treason to say the truth? A bitter truth, but no less true for that.[6]

Not treason. Never treason. I love His Grace as much as any man. My own niece is his queen, and I remained loyal to him when wiser men fled. I am his Hand, the Hand of the King, how can I be a traitor? I only meant to save our lives, and ... honor ... yes.[6]

Stannis had left his queen on Dragonstone along with her uncle Axell, but the queen's men were more numerous and powerful than ever, and Alester Florent was the foremost.[1]

Tyrell demanded the lands and castles of Lord Alester Florent, his own bannerman, who'd had the singular ill judgment to back first Renly and then Stannis.[15]

This man is defeated.[6]

Alester is married to Lady Melara of House Crane. The couple have three children, Alekyne, Melessa, and Rhea; as Alester's only son, Alekyne is the heir to Brightwater Keep. Alester had three brothers, Ser Axell, Ser Ryam, and Ser Colin, and one sister, Rylene. His brothers have given him several nephews and nieces.[5]

His niece, Selyse is married to Stannis Baratheon, the Lord of Dragonstone and brother to King Robert I Baratheon. His brother Axell serves Stannis at Dragonstone as castellan. He is also the maternal grandfather of Samwell Tarly, for his daughter Melessa is married to Lord Randyll Tarly.[5][7]