From A Wiki of Ice and Fire
Jump to: navigation, search
Not to be confused with Otho II Hightower.

Ser Otto Hightower was a knight from House Hightower who served as Hand of the King to three kings, although two of the kings removed him from office at various times.[4] He was the younger brother of Lord Hightower,[1] and the uncle of Lord Ormund Hightower of Oldtown.[5] His children included Alicent Hightower, the second queen of King Viserys I Targaryen, and Ser Gwayne Hightower, second in command of the gold cloaks.[6] Otto is remembered as a warning that knowledge is not everything.[7]

In the television adaptation House of the Dragon, Otto is portrayed by Rhys Ifans.[8]

Considered a man of great learning in his time, Otto was haughty, blunt, and domineering.[1] He was a methodical,[6] and ambitious man.[9]

Ser Otto brought his wife and children, including his daughter Alicent, to court when he became Hand of the King after the death of Prince Baelon Targaryen, the son and heir of King Jaehaerys I Targaryen.[10] Jaehaerys was devastated by the deaths of Baelon and his beloved wife, Queen Alysanne Targaryen, becoming grief-stricken, and with his health failing he became bedridden. Otto effectively ruled the Seven Kingdoms as Hand in the final two years of Jaehaerys's reign, while his daughter, Alicent Hightower, nursed the ailing king.[1]

Otto continued as Hand to Jaehaerys's grandson and successor on the throne, Viserys I Targaryen. He became a bitter rival of the king's brother, Prince Daemon Targaryen, who had been named master of coin. Otto convinced the king to remove him from office and did so again when Viserys named Daemon master of laws. He came to regret this, however, when Daemon was named commander of the City Watch, as this put two thousand men under Daemon's command and the prince thrived in this new office. Otto feared Daemon would become a second Maegor the Cruel if he ever ascended to the Iron Throne, sharing his fears with his brother, the Lord of the Hightower. Thus, by this time, Otto wished for Princess Rhaenyra Targaryen to succeed her father.[1]

Otto's daughter Alicent became King Viserys's second wife in 106 AC, after the death of Queen Aemma Arryn. In 109 AC, Otto was removed as Hand for hounding Viserys to declare Alicent's sons the heirs to the Iron Throne instead of Princess Rhaenyra. Having no place at court anymore, Otto returned to Oldtown. A "queen's party", known as the greens, a group of powerful lords who were friends with Queen Alicent, remained, who supported the rights of Alicent's sons.[1]

In 120 AC, Otto returned as Hand after Lord Lyonel Strong died. When Viserys died in 129 AC, Otto played a crucial role in crowning his eldest grandson as King Aegon II in defiance of the last will of Viserys I, which specified Rhaenyra as the successor. This defiance precipitated the civil war known as the Dance of the Dragons.[7] 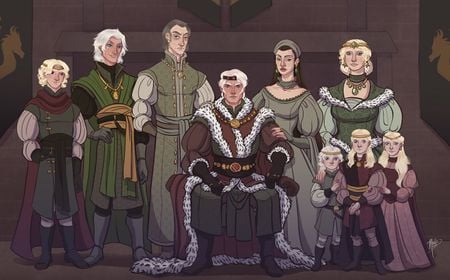 The Dance of the Dragons began with Otto serving as Hand of the King to his grandson Aegon II Targaryen. According to Orwyle, Otto ordered the confinement of Lord Lyman Beesbury in the black cells. Ser Gwayne Hightower, Otto's son, was named as the second in command of the gold cloaks, behind Ser Luthor Largent, instructing him to watch out for any signs of disloyalty towards King Aegon II.[6]

The blacks, Rhaenyra Targaryen's faction opposing Aegon's greens, included the battle-tested Prince Daemon Targaryen, who, in the course of his pre-war adventures, had made many foes, including Otto.[1] After the death of Prince Jaehaerys Targaryen at the hands of Daemon's assassins, Blood and Cheese, Aegon ordered the deaths of King's Landing's ratcatchers. Otto brought a hundred cats to the Red Keep.[11]

Otto reached out to other enemies of the prince, the Kingdom of the Three Daughters, as allies. They were crucial in breaking the Velaryon blockade in the Battle of the Gullet. Otto was unsuccessful in gaining an alliance with Qoren Martell, Prince of Dorne.[12]

Aegon II perceived Otto's diplomacy as slothful at a time when Prince Daemon had captured Harrenhal and many houses had declared for the blacks. This led to Otto's replacement as Hand by Ser Criston Cole, the Lord Commander of the Kingsguard, despite the pleading of Queen Alicent Hightower, Otto's daughter and Aegon's mother. It was only after his dismissal that Otto's diplomatic efforts bore fruit.[12]

Just as he had predicted, Otto was the first to be beheaded as a traitor by Rhaenyra after the fall of King's Landing in 130 AC.[3]

Lord Davos Seaworth, now Hand of the King to Stannis Baratheon, is concerned that he has risen too high from his humble origins. When Davos suggests that the Hand should be someone who is learned, Maester Pylos reminds him that the knowledgeable Otto was an unsuccessful Hand.[7]

Thrones are won with swords, not quills. Spill blood, not ink.[12]

Lord Butterwell was renowned for wit, Myles Smallwood for courage, Ser Otto Hightower for learning, yet they failed as Hands, every one.[7]

Ser Otto Hightower had one daughter Alicent and an unknown number of sons, the youngest being Ser Gwayne.[1] Otto had four grandchildren and three great-grandchildren.