Alyssa Velaryon was a member of House Velaryon during the first century after Aegon's Conquest. She was the wife and queen of King Aenys I Targaryen, and they had six children together.[3][4] Some years after Aenys's death, Alyssa served as Queen Regent for her youngest son, King Jaehaerys I Targaryen.[5] She married again to Lord Rogar Baratheon, and gave birth to two more children during the marriage.[6]

Alyssa had the silvery hair and purple eyes of the Valyrians.[4][7]

During her wedding to Lord Rogar Baratheon, Alyssa wore a greatcloak with both the Velaryon seahorse and the Targaryen dragon facing each other.[7]

Alyssa had charm, wit, and kindness.[7] According to Septon Barth, above all else Alyssa desired to be loved, admired, and praised.[8]

Alyssa was born in 7 AC to Lord Aethan Velaryon, King Aegon I Targaryen's master of ships,[4] and Lady Alarra Massey.[7] She had several brothers and cousins in House Velaryon.[4]

When Queen Visenya Targaryen suggested a betrothal between her own son Maegor and Alyssa's firstborn Rhaena in 24 AC, Alyssa and her husband were opposed the idea. King Aegon I Targaryen eventually agreed to wed Maegor to another. In the later years of Aegon I's reign, when Maegor refused half a dozen dragon hatchlings, Alyssa teased him, asking him whether he was afraid of dragons.[4] Following King Aegon I's sixtieth nameday in 33 AC, Aenys and Alyssa took over the royal progresses, traveling across the realm half of every year.[4]

Upon the coronation of her husband Aenys in 37 AC, Alyssa became queen. It has been suggested that the birth of Alyssa's sixth child, Vaella, in 39 AC is what drove Prince Maegor to take a second wife that same year. Aenys and Alyssa lived in a manse on Visenya's Hill during his reign, as the Red Keep was still not yet complete. In 41 AC, following the first rebellious actions of the Warrior's Sons and Poor Fellows, King Aenys I decided that the manse was not safe for his family, and decided to relocate to Dragonstone. Aenys died the following year on Dragonstone.[4][9] At his funeral, Alyssa sang a dirge for him.[4] 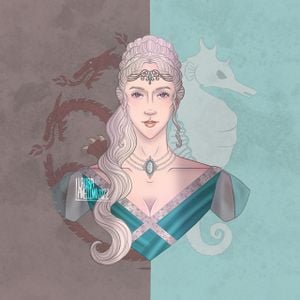 Alyssa left Dragonstone within hours of the funeral, fleeing to her father on Driftmark. She brought her three youngest children, Viserys, Jaehaerys, and Alysanne with her. There, she proclaimed her eldest son, Aegon, the true king of Westeros while Maegor, who had claimed the Iron Throne and been crowned king, laid in a coma in King's Landing.[4] Dowager Queen Visenya eventually traveled to Driftmark and convinced Alyssa to return to court with her children. She was present for Maegor's wedding to Tyanna of the Tower in 42 AC, and even took part in the bedding ceremony. However, her presence started the rumors that she had abandoned Aegon's cause. Regardless of the rumors, in the latter part of 43 AC, Queen Tyanna warned King Maegor that Alyssa had secretly been communicating with Storm's End, the Eyrie, Winterfell, and Casterly Rock in an attempt to convince them to declare for Aegon.[4]

By 44 AC, Alyssa had become a prisoner in all but name to Dowager Queen Visenya on Dragonstone, together with her son Jaehaerys and daughter Alysanne, while her son Viserys was summoned to court to serve as Maegor's squire. When Visenya died in 44 AC, the chaos that followed gave her the opportunity to escape with Jaehaerys and Alysanne. She also stole Dark Sister, Visenya's Valyrian steel sword, from the dead Dowager Queen's chambers.[11][4]

Alyssa took her children into hiding, and it was thought that they had crossed the narrow sea, possibly to Tyrosh or Volantis. Alyssa's escape led to the death of her eldest living son, Viserys, who was tortured by Queen Tyanna for nine days until he died. His body was left in the courtyard of the Red Keep, as Maegor hoped Alyssa would return to claim it. She did not return, however, and Viserys was eventually cremated.[11][4] In 47 AC, Ser Theo Bolling, a landed knight who had fought for King Maegor, was arrested by the Kingsguard. He was charged with conspiring with Alyssa to murder Maegor and place her son Jaehaerys on the throne.[4][11]

By 48 AC, Alyssa and her children had arrived at Storm's End, were Lord Rogar Baratheon, the first to give his support to the prince, proclaimed Jaehaerys to be the true and lawful king of the Seven Kingdoms.[6][11][4] Alyssa stood beside her son as he vowed to end Maegor's reign. Nine days after Maegor's death, Jaehaerys returned with his siblings to King's Landing to claim the throne; Alyssa arrived a fortnight later with Lord Rogar and a large host.[4]

Alyssa served her son Jaehaerys I Targaryen as Queen Regent during his minority. Alyssa wished for the prisoners in the dungeons of the Red Keep to be executed for having supporter King Maegor I Targaryen. Jaehaerys, however, proclaimed that all of Maegor's supporters would be forgiven, and Alyssa refused to go against his word, as it would make him look weak. Jaehaerys did, however, make an exception for his mother, by executing the headsman, gaolers, and confessors who had taken part in torturing Alyssa's son Viserys. Alyssa was afterwards gifted with their heads and hands.[12]

Later that year, Alyssa accompanied her surviving children to Oldtown where Jaehaerys successfully reconciled the Iron Throne and the Faith. According to Archmaester Gyldayn, it was widely believed during Jaehaerys's reign that during the visit to Oldtown, Aerea and Rhaella Targaryen, the twin daughters of Queen Rhaena and Prince Aegon Targaryen, were switched. Gyldayn suggests that Rhaena or Alyssa might have done so.[12]

When her daughter Rhaena married Androw Farman on Fair Isle without either informing or inviting her mother, Alyssa was angered. This was the start of a rift that began to slowly develop between them. Later that same year, Alyssa was married Lord Rogar Baratheon, the Hand of the King, in the Dragonpit. Their wedding became known as the Golden Wedding. By Alyssa's suggestion, the wedding was followed by the War for the White Cloaks, a contest the victors of which would be granted places in the Kingsguard.[7][6]

Next, Alyssa and the small council began to debate about a bride for Jaehaerys. Jaehaerys was not allowed to be present for these discussions, as Alyssa knew that he would choose his younger sister Alysanne, and Alyssa wished to avoid an uprising similar to the one that had followed the wedding of her eldest two children, Rhaena and Aegon. Alyssa also refused the idea of wedding Jaehaerys to a foreigner. After Jaehaerys and Alysanne had fled to Dragonstone, where they had secretly gotten married, Alyssa and Rogar traveled after them. When Rogar and Jaehaerys's Kingsguard were about to cross swords, Alyssa declared they would leave in peace, and returned with her husband and his men to King's Landing.[7]

Alyssa hoped that Jaehaerys and Alysanne would come to King's Landing to celebrate the start of 50 AC. When they did not, Alyssa planned to travel to Dragonstone again, so she could beg Jaehaerys and Alysanne to come home. She was forbidden to go by her husband, however, and Alyssa stayed at the Red Keep. Instead, she sent ladies-in-waiting to Dragonstone, supposedly to serve as Alysanne's household, but in truth to try and persuade her to rescind the marriage. However, Alysanne charmed them all and gained their complete loyalty. With her plan failed and the news of the king's marriage having spread throughout the realm, Alyssa informed the small council they had to accept the marriage. Rogar, however, angrily declared her to be weak, and suggested putting Jaehaerys aside to crown Princess Aerea, the eldest daughter and heir of the deceased Prince Aegon, in his stead. For this suggestion, Alyssa stripped Rogar of his office, which shattered the last bit of affection Rogar had felt for her.[8]

Alyssa informed Jaehaerys by raven about some of what had happened and appointed her brother, Lord Daemon Velaryon, as the new Hand of the King, afterwards retiring from ruling the kingdom for the remainder of Jaehaerys's minority. On the twentieth day of the ninth moon of 50 AC, Jaehaerys turned sixteen[8] and returned to King's Landing, where Alyssa reconciled with her son. Jaehaerys summoned Rogar back to court, and instructed him to be an honorable husband to Alyssa. Reconciled, Alyssa and Rogar returned to Storm's End together. They returned to the city when Jaehaerys and Alysanne had their public second marriage.[13]

Much to everyone's surprise, Alyssa became pregnant in 51 AC. While Rogar halted his infidelities to stand by Alyssa during her pregnancy, joyful of the prospect of becoming a father, Alyssa feared this pregnancy would end similar to her previous one. In early 52 AC, however, Alyssa gave birth to a healthy son, Boremund Baratheon, although she never truly recovered from the childbirth.[2]

In 54 AC, Alyssa became pregnant again. She went into labor a month early, and because of this was on the brink of death. When King Jaehaerys I Targaryen and Queen Alysanne Targaryen arrived at Storm's End to stand by their mother, they found Alyssa's husband, Lord Rogar Baratheon drunk and unwilling to enter his wife's bedroom. According to Maester Kyrie, only sweetsleep gave Alyssa some respite from her pain; He informed the king and queen that Alyssa was dying, and that there was no more he could do to save her. However, there was a chance he could save her child, although he would have to cut open Alyssa to do so. Jaehaerys forced Rogar into the room and gave him the choice. Unable to look at his wife, Rogar stayed only long enough to tell the maester to save his child.[2]

As Maester Kyrie cut open Alyssa to save the child, Alysanne remained by her side, holding her hand. Many accounts claim that Alyssa woke before the surgery began, and consented to the plan. Other accounts, however, claim she never woke. Maester Kyrie's surgery was successful, and as she died Alyssa gave birth to a daughter, Jocelyn Baratheon.[2]