Queen Ceryse Hightower was a noblewoman from House Hightower and was the daughter of Lord Manfred Hightower of Oldtown. Her maternal uncle was one of the High Septons during the reign of King Aegon I Targaryen. She eventually married Prince Maegor Targaryen, becoming his first (of many) wives.[1] 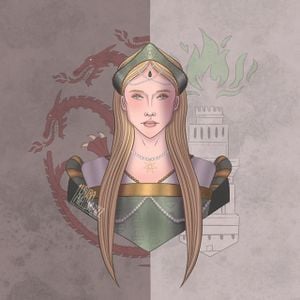 Ceryse's uncle, the High Septon, protested strongly when Queen Visenya Targaryen suggested that her son Prince Maegor should be wed to Princess Rhaena Targaryen, and instead suggesting his own niece. Ceryse and Maegor were wed in 25 AC.[4] The ceremony was held at the Starry Sept of Oldtown, with Ceryse's uncle, the High Septon, performing the rites.[1] Ceryse was twenty-three, whereas Maegor was thirteen years old.[5][4][1] Maegor boasted to having consummated the marriage a dozen times the night of the wedding,[6][1] and those who had seen the bedding agreed that Maegor was a lusty husband.[1]

While the marriage of Ceryse and Maegor remained childless, Maegor's half-brother Aenys had five healthy children. After the birth of Aenys's sixth child, Vaella, in 39 AC, Maegor decided that Ceryse was barren,[1] and he took Alys Harroway to wife, entering a polygamous marriage.[5][4] The High Septon demanded that Maegor should leave the "whore of Harroway" and return to Ceryse.[1] When Maegor was presented with choosing between setting Alys aside, or being exiled for five years, he chose exile and left for Pentos, leaving Ceryse behind in Westeros.[5] Septon Murmison was tasked with making Ceryse fertile, but failed. Ceryse eventually returned to her father in Oldtown.[1]

Maegor returned to Westeros to claim the Iron Throne after the death of his brother, King Aenys I, in 42 AC. Later in the same year, Maegor I announced his intent to marry again, taking Tyanna of the Tower as his third wife, who had become his paramour while in exile in Pentos. Grand Maester Myros spoke against the proposed wedding, stating that Maegor's "one true wife" awaited him at the Hightower. Ceryse, still at Oldtown, continued to insist that she was Maegor's only lawful queen.[1]

In 43 AC King Maegor and Dowager Queen Visenya Targaryen moved towards Oldtown, threatening to incinerate the Starry Sept in response to the High Septon's continued condemnation of his polygamous marriages. The High Septon instead died suddenly shortly before they arrived, however. Maegor remained at Oldtown for half a year while presiding over the trials of the Warrior's Sons chapter at Oldtown, and in that time Ceryse reconciled with Maegor. Ceryse agreed to accept Maegor's other two wives, with Maegor in turn swearing to restore Ceryse to all the rights, incomes, and privileges due her as lawful queen. They celebrated their reunion with a great feast and had a second consummation. She later returned to court at King's Landing.[1]

Shortly after the completion of the Red Keep in 45 AC, Ceryse died of a sudden illness. It was rumored she had said something to offend Maegor and he ordered Ser Owen Bush of the Kingsguard to remove her tongue. While Ser Maladon Moore held her, Ceryse allegedly struggled so much that Owen's knife slipped and he accidentally slashed her throat. Though never proven, this story was widely believed at the time. Most historians believe it was a slander concocted by the king's enemies to further blacken Maegor's repute. Maladon denied the story and stated that Ceryse died of "shrewishness".[1][3]