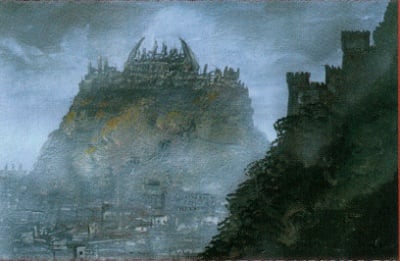 The Dragonpit is a huge, cavernous building that sits atop the Hill of Rhaenys in King's Landing. Once a home for the royal dragons of House Targaryen,[1] it has been abandoned for a century and a half[2] and now lies in ruins.[3] It is believed that the confines of the Dragonpit restricted the growth of dragons kept within.[1][4] It is one of the largest buildings in the city.[5]

The Dragonpit is a huge domed castle[1] at the crown of Rhaenys's Hill.[6] The main gate consisted of massive doors, mainly bronze with some iron,[6][7][8] and were so wide that thirty knights could ride through it at once.[1] A score of lesser entrances were also present, some of them were oak-and-iron doors.[8] The building's walls were thick and the roof strong.[7]

A huge dome was constructed above the pit.[9] Benches were located in the pit itself, which can seat eighty thousand.[7]

Within the structure, long brick-lined tunnels have been dug deep into the hillside, fashioned like caves, five times as large as the dragon's lairs on Dragonstone.[10] Beneath the dome, there were forty huge undervaults which had been carved in a great ring. These man-made caves were closed off at both sides by thick iron doors. The inner doors opened on the sands of the pit itself, and the outer doors opened to the hillside.[11]

When living dragons still nested beneath the dome, light would shine through the windows at night.[12]

In 42 AC, during the early phase of the Faith Militant uprising, King Maegor I Targaryen used the dragonflame of Balerion in the burning of the Sept of Remembrance on the top of Rhaenys's Hill. Three years later, shortly after the completion of the Red Keep's construction, Maegor ordered the construction of the Dragonpit, which he called "a great stone stable for dragons".[14] Because Maegor had killed all those who had built the Red Keep to hide its secrets, many of those hired to construct the building fled. Maegor eventually had to use city prisoners, with supervisors from Myr and Volantis.[15][14]

Construction of the Dragonpit continued during the reign of Maegor's successor, King Jaehaerys I Targaryen, initially led by Jaehaerys's Hand of the King, Lord Rogar Baratheon of Storm's End. In 49 AC, Rogar married the Queen Regent, Alyssa Velaryon, in the Dragonpit, witnessed by forty thousand people.[9] Rogar wished to complete the Dragonpit before Jaehaerys came of age and would start to rule on his own, but found himself lacking the proper funds to continue construction by 50 AC.[16] After Jaehaerys assumed rule on his own, his newly-appointed master of coin, Rego Draz, secured funds by loaning gold from the banks of Braavos, Tyrosh and Myr.[17] By 52 AC, King Jaehaerys would often visit the Dragonpit to keep an eye on the progress of its construction.[6] Eventually, due to all of the taxes imposed by the master of coin to pay for the Dragonpit's completion and the other improvements on King's Landing, Rego's popularity plummeted significantly.[6]

Construction on the pit was finally completed in 55 AC and a great tourney was held in celebration. Ser Lucamore Strong, the victor of the melee, was rewarded with the white cloak of the Kingsguard.[18]

When Balerion returned to Westeros in 56 AC, King Jaehaerys I Targaryen had the dragon confined to the Dragonpit. He also created a new order of seventy-seven warriors, the Dragonkeepers, to guard the royal dragons.[18] Three younger dragons were soon housed in the Dragonpit along with Balerion, though Jaehaerys and Queen Alysanne Targaryen kept their own dragons, Vermithor and Silverwing, at the Red Keep.[10]

King Jaehaerys I was cremated in the Dragonpit in 103 AC.[20]

In 129 AC at the start of the Dance of the Dragons, King Aegon II Targaryen was crowned in the Dragonpit. According to Grand Maester Munkun, more than a hundred thousand smallfolk were jammed into the building, while the fool Mushroom claims the stone benches were only half-filled.[7]

During the fall of King's Landing to Aegon II's rival, Queen Rhaenyra Targaryen, the dragon Sheepstealer landed atop of the Dragonpit.[21]

When Rhaenyra ruled the city, the Dragonpit housed nine dragons: Caraxes, Vermithor, Silverwing, and Sheepstealer, who eventually flew off to battle, and Shrykos, Morghul, Tyraxes, and Dreamfyre. The Dragonpit became the site of executions of traitors, rebels and murderers. For the price of three pennies, the people of the city were allowed to watch criminals be beheaded and their corpses fed to Rhaenyra's dragons.[11] By 130 AC, it had become the custom that at least one dragonrider resided in the Dragonpit, to rise to the defense of the city should this be necessary.[11]

Near the end of Rhaenyra's hold over the city, the five dragons that remained in the city were killed during the Storming of the Dragonpit, when tens of thousands of crazed and starving smallfolk led by the Shepherd stormed the Dragonpit to kill the dragons. All four dragons remaining inside, as well as Rhaenyra's Syrax, were killed in the struggle, as well as thousands of smallfolk. The Dragonpit was reduced to flaming ruins.[8]

Ser Tyland Lannister, the Hand of the King in the first years of Aegon III Targaryen's reign, continued the restoration of the Dragonpit by setting hundreds of stonemasons, carpenters, and builders to work.[23]

By 133 AC, the dragon Morning had made its lair in the ruined Dragonpit.[24]

During the Great Spring Sickness, so many people from King's Landing died so quickly that there was no time to bury the bodies. Instead they were piled up in the Dragonpit, and when the corpses were ten feet deep, the Hand of the King, Lord Brynden Rivers, ordered the pyromancers to burn them. The light of the fires shone through the windows, and by night citizens could see the dark green glow of wildfire all through King's Landing.[12]

King Aerys II Targaryen had wildfire stored underneath the Dragonpit, as part of his wildfire plot during Robert's Rebellion.[2] 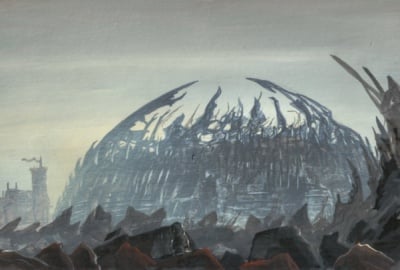 The ruins of the Dragonpit, by Franz Miklis © Fantasy Flight Games

Aboard the Storm Dancer as she is about to dock in King's Landing, Catelyn Stark takes in the view of the capital. Across the city she can see atop Rhaenys's Hill the blackened walls of the Dragonpit, its huge dome collapsed in ruin.[3]

Some whores use the Dragonpit as a place to entertain their customers and one of them, along with their patron, falls through the rotting floor into a cellar. There they find a hidden stash of wildfire, placed by Lord Rossart during Robert's Rebellion.[2]

Aboard the Balerion, Arstan Whitebeard tells Queen Daenerys Targaryen about the Dragonpit.[1]

In Meereen, just before attempting to steal Rhaegal and Viserion from the Great Pyramid, Prince Quentyn Martell recalls reading that the Dragonpit had restricted the size of House Targaryen's dragons.[4]

Hardly had the last stone been set on the Red Keep than Maegor commanded that the ruins of the Sept of Remembrance be cleared from the top of Rhaenys's Hill, and with them the bones and ashes of the Warrior's Sons who had perished there. In their place, he decreed, a great stone "stable for dragons" would be erected, a lair worthy of Balerion, Vhagar, and their get. Thus commenced the building of the Dragonpit.[15]

The Dragonpit atop the hill of Rhaenys had been abandoned for a century and a half. He supposed it was as good a place as any to store wildfire, and better than most, but it would have been nice if the late Lord Rossart had told someone.[2]

In King's Landing, your ancestors raised an immense domed castle for their dragons. The Dragonpit, it is called. It still stands atop the Hill of Rhaenys, though all in ruins now. That is where the royal dragons dwelt in days of yore, and a cavernous dwelling it was, with iron doors so wide that thirty knights could ride through them abreast. Yet even so, it was noted that none of the pit dragons ever reached the size of their ancestors. The maesters say it was because of the walls around them, and the great dome above their heads.[1]

None of the dragons bred and raised in the Dragonpit of King's Landing had ever approached the size of Vhagar or Meraxes, much less that of the Black Dread, King Aegon's monster.[4]