Androw Farman was a member of House Farman. He was the second son of Lord Marq Farman of Fair Isle.

However, on Dragonstone, Androw found life to be no better. Rhaena was called the "Queen in the East", but nobody considered him a king, or even a lord consort. He sat at his wife's side at meals but did not share her bed; that honor went to her companions and favorites. They slept apart in different towers, and though the gossip at Dragonstone was that his wife told him he should find a pretty maid to share his bed, he never did. Having no skill at arms, he would remain abed while knights trained in the yard. He could neither read nor write, so could not enjoy the Dragonstone library. Though Androw could ride a horse passably well, and would trot around the yard, he was too timid to leave the castle to explore the island. Men at Dragonstone paid him no mind; the ladies laughed at him behind his back; servants sometimes ignored his commands. Children taunted him, the cruelest being his step-daughter Aerea Targaryen, who once threw the contents of a chamberpot over his head just because she was angry at her mother. Androw drank a great deal, and was known to spend whole days in the Chamber of the Painted Table, moving painted wooden soldiers around the map. Rhaena's companions would joke that he was planning his conquest of Westeros.[1] 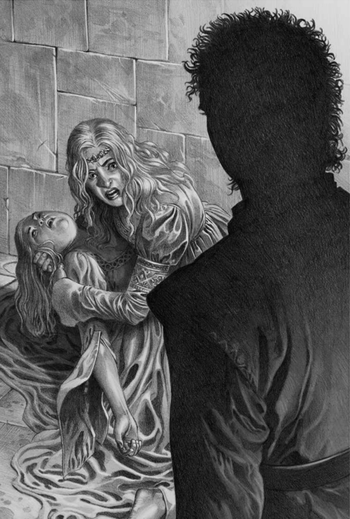