House Farman of Faircastle is a noble house from Faircastle on Fair Isle, off the coast of the westerlands. They are sworn to House Lannister of Casterly Rock, and are considered among their principal bannermen. The Farmans are known for their hatred of the ironborn from the Iron Islands.[3]

House Farman's words are The Wind Our Steed.[1] They blazon their arms with three silver ships on blue, a border of crimson and gold.[4]

When the strength of the westerlands grew while the power of the driftwood kings dwindled, Fair Isle was the first to be liberated from ironborn occupation when Gylbert Farman incited a smallfolk uprising. King Erich V Harlaw retook Fair Isle in his youth, but lost it in his old age.[5]

When Prince Aegon rebelled against his uncle Maegor I Targaryen, House Farman joined the prince against the king in the Battle Beneath the Gods Eye in 43 AC. In the ensuring battle, Lord Farman and his eldest son perished alongside Aegon the Uncrowned. Farman's second son Marq succeeded him as Lord of Fair Isle. The widowed Rhaena Targaryen fled from Maegor to Fair Isle, where Lord Marq granted her the hospitality of Faircastle.[6] When Rhaena was summoned to King's Landing by Maegor the Cruel in 47 AC, she went as she had grown fond of Lord Farman and even more than fond of his second son Androw, and ignoring Maegor's summon would bring the king with his dragon Balerion down on Fair Isle.[7][6]

After Maegor's death and the coronation of King Jaehaerys I, Rhaena returned to Fair Isle,[8] where she quietly married Androw Farman. The marriage had been conducted without the Crown's leave, and angered many at court believing Rhaena had married below her station.[9] While Rhaena insisted she married Androw as he was kind to her, Lord Farman's maester Smike suggested that Rhaena had fallen in love with Androw's sister, Elissa. The marriage caused discord on Fair Isle, with some Fair Islanders fearing her dragon Dreamfyre, while court life at Faircastle became centered around Rhaena and her companions, earning them the resentment of Lord Farman's heir, Ser Franklyn. While Lord Marq was a happy host of Rhaena, he died choking on a fish bone in 50 AC and Franklyn succeeded him as Lord of Fair Isle. Franklyn was quick to dispel Rhaena and Androw from Fair Isle, and Elissa followed them despite his efforts to keep her at Faircastle.[1]

Rhaena's party eventually settled on Dragonstone, where Elissa became bored remaining on the island, longing to travel at sea again. With Rhaena's reluctant leave, Elissa set sail for Pentos, but not before stealing three dragon eggs.[10] Elissa would sell the eggs to the Sealord of Braavos and use the money to build a ship to sail the Sunset Sea.[11] Rhaena was enraged at the betrayal, arguing with Androw when she accused him of aiding his sister. Though never passionate, Rhaena's marriage with Androw continued to decline, reaching a low in 54 AC. He often found himself ignored and sidelined at court and by other nobles, with Rhaena even declaring "The wrong Farman ran away." Furious at his own treatment, Androw poisoned Rhaena's companions with tears of Lys. When confronted by Rhaena, he committed suicide by leaping from a window.[10] When her daughter Aerea went missing, Rhaena searched for her on Fair Isle, where Rhaena threatened Lord Franklyn after a heated conversation, appalling King Jaehaerys and his lords alike. In his next progress, the king would omit visiting Fair Isle,[11] which he would not visit until 88 AC when Lord Franklyn had passed.[12]

During the Dance of the Dragons, Lord Dalton Greyjoy landed longships on Fair Isle while Lord Farman's pleas for help were left unanswered. Faircastle eventually fell to the ironborn and the Red Kraken claimed four of Lord Farman's daughters as salt wives, while giving the fifth "homely one" to his brother, Veron. Lord Farman and his sons were ransomed back to Casterly Rock.[13][14] Lord Farman later perished in the Dance, as did two of his daughters. After the war, Greyjoy was instructed by the Crown to return Fair Isle to the Farmans, though the Red Kraken ignored the edicts.[15] Lord Alyn Velaryon was dispatched to recapture Fair Isle with the Velaryon fleet in 133 AC. While Velaryon was making his way west, the Red Kraken was murdered by a girl named Tess. Much of the Greyjoy fleet fled the island, and the Fair Isle smallfolk and remaining knights rebelled against the ironborn. Only Faircastle remained under ironborn control, until its garrison commanders quarreled over Lysa Farman, one of Dalton's salt wives. When Velaryon arrived, the ironborn had abandoned Fair Isle and it was restored to the Farmans. The Farmans were left to rebuild their fleets.[16]

Two years after the Great Spring Sickness, Lord Dagon Greyjoy sacked Fair Isle and took a hundred women away along with half its wealth. Ser Duncan the Tall considered leaving the service of Ser Eustace Osgrey and pledging his sword to Lord Farman, who was reinforcing the defenses of his island.[17]

During the misrule of Lord Tytos Lannister, Lord Farman built a fleet of warships to defend his coasts from ironborn raiding, against the wishes of Lord Tytos who did not wish to give the Greyjoys offense. However, Lord Quellon Greyjoy smashed Lord Farman's fleet and plundered Fair Isle.[18] Some years after Lord Tywin Lannister defeated the Reyne-Tarbeck rebellion, Lord Farman of Faircastle grew truculent. Tywin sent him a musician as an envoy playing "The Rains of Castamere", and that was enough to make Lord Farman reconsider his position.[19]

Jeyne Farman was Cersei Lannister's companion at Casterly Rock during her youth.[20] 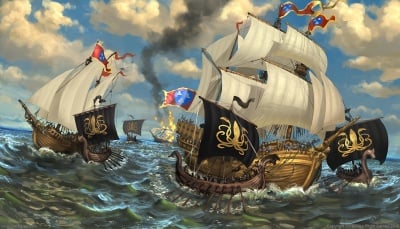 Cersei Lannister recalls that she, Jeyne Farman, and Melara Hetherspoon went together to visit Maggy the Frog, but Jeyne ran away from the tent as soon as the maegi opened her eyes. Cersei thinks that perhaps Jeyne did the most clever thing when she fled, since afterwards she had a pleasant life marrying one of her brother Lord Sebaston's bannermen and whelping a dozen children.[20][21]

House Farman at the end of the third century

The known Farmans during the timespan of the events described in A Song of Ice and Fire are: