House Marbrand of Ashemark is one of the main noble houses from the westerlands. Their seat of Ashemark is located in the hilly area near where the Tumblestone begins.

Their blazon is a burning tree, orange on smoke.[3][4] Their motto does not appear in the books, but according to semi-canon sources it is "Burning Bright".[5] 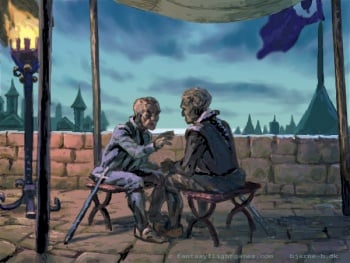 House Marbrand was formed by the union of First Men and Andal nobles during the coming of the Andals.[2]

Ser Lorent Marbrand was a member of the Kingsguard during the reign of Viserys I Targaryen.[6]

A participant in the tourney at Ashford Meadow fought under the Marbrand banner during the reign of Daeron II Targaryen.[7] Although it is non-canon information, in the comic book adaptation of The Hedge Knight the name of Ser Denys Marbrand is given on the roll of arms.

Addam Marbrand befriended Tywin's son Jaime while serving as a page at the Rock.[10]

Among the gathered knights at the Hand's tourney is one with the arms of House Marbrand.[11]

After war breaks out, Tyrion Lannister spots the burning tree of the Marbrands in the host of his father, Lord Tywin Lannister.[3] Ser Addam Marbrand leads House Lannister's outriders.[12] During the battle on the Green Fork, Addam commands the right wing of Tywin's army, which includes some four thousand men.[13]

During his campaign in the westerlands, Robb Stark, the new King in the North, leads the taking of Ashemark from the Marbrands.[14]

Addam is made commander of the City Watch of King's Landing by Tywin.[17] He is among the nobles gathered to greet the Dornish party headed by Prince Oberyn Martell when they arrive at King's Landing.[18] Addam gives a pair of silver spurs to King Joffrey I as a wedding present,[12] but the king dies during his wedding feast.[19]

Ser Jaime Lannister asks his childhood friend Addam to test his ability to fight with his left hand, and Jaime is badly beaten.[10]

After the murder of Tywin, Addam's gold cloaks unsuccessfully search King's Landing for Tyrion.[20] Jaime asks for and receives permission to take Addam with him as part of the force to resolve the siege of Riverrun.[21] Addam commands the outriders in Jaime's force[22] and searches for Ser Brynden Tully after the Blackfish escapes from Riverrun.[23]

House Marbrand at the end of the third century

The known Marbrands during the timespan of the events described in A Song of Ice and Fire are:

With unknown relationship with the main branch, other Marbrands include: