Tyrion and his clansmen are assigned to the vanguard under the command of Ser Gregor Clegane. Returning to his tent, Tyrion is greeted by a whore named Shae, whom Bronn has found for him. Before dawn, Tyrion is roused by the call to arms. In the ensuing battle on the Green Fork, Tyrion and his clansmen do well and the enemy is routed. Afterward Lord Tywin Lannister learns that Robb Stark has tricked him.

A long table draped with a golden cloth has been set up on a hill overlooking the kingsroad for Lord Tywin Lannister and his chief knights and lords bannermen to take their evening meal. Tyrion, arriving late, is embarrassed as he waddles up to the table. Lord Tywin mocks that he will charge Tyrion with burying the dead if he arrives as late to battle as he does to table. Tyrion replies sourly that surely a peasant or two could be found for him to kill.

The news from Ser Addam Marbrand is that Robb Stark has moved south from the Twins with House Frey’s levies in tow and is now no more than a day away. Tyrion mockingly protests that he is about to eat and Tywin asks if the thought of coming to grips with Robb unmans him. Tyrion jests that he would prefer to come to grips with the roast pig, which is far more tender and better smelling than Robb.

The army’s quartermaster, Lord Leo Lefford, who has had to supply Tyrion’s 300 clansmen, uses this opportunity to quip that he hopes the clansmen are braver than Tyrion or else they have wasted good steel. Tyrion assures him that the arms and armor will be put to good use. Ser Kevan, who Tyrion knows is giving voice to Lord Tywin’s thoughts, takes the opportunity to inform Tyrion that he and his clansmen will fight in the vanguard since they seem so ferocious. Tyrion stresses the ferocity of the clansmen by recounting their recent lethal fight over a sausage.

Lord Tywin uses this as evidence of a poor commander who cannot maintain discipline. Tyrion knows that his brother could always make men follow him eagerly, but Tyrion lacks such charisma and must use gold and his family name to get men to follow him. Tywin then tells Kevan that because the clansmen have no discipline, maybe they should not be in the vanguard. When Lord Tywin suggests that he should guard the baggage instead, Tyrion angrily agrees to command the vanguard, only to learn that he will not command, but be under Ser Gregor Clegane. Disgusted, Tyrion excuses himself after only eating one bite of the delicious pork.

Tyrion gets lost in the camp but finds his way by following the sounds of Shagga’s laughter in the dark. Conn calls for him to share their meat and Tyrion agrees to join them when it is cooked, doubting that will be before the battle. When he reaches his tent, he finds Bronn sharing wine with his new servants—a groom, a body servant, a squire named Podrick Payne, and a slim young dark-haired whore named Shae. Tyrion told Bronn to find him a young one with a pretty face and to be sure to tell her who and what he is, so as to avoid the displeasing look of revulsion that sometimes greets him. He likes the girl Bronn has found.

Tyrion invites Shae into his tent. When he asks if she is a maiden, Shae tells him that finding out will cost him double and Tyrion decides they will get along fine. Tyrion explains that her duties besides sleeping with him include serving him and monogamy. When they have sex, Shae expresses pleasure, which pleases Tyrion, who decides he does not care if it is feigned. Tyrion also finds it good to be with a woman after nearly a year of enforced abstinence.

Afterward, he sneaks out of the tent without waking Shae. Outside, he asks Bronn where he found her and is told that she was stolen from a knight because all the pretty ones were taken. Tyrion comments that he did not ask Bronn to make him an enemy, but agrees to keep Shae. When Tyrion asks for the name of the knight so he can avoid him in battle, Bronn insists that Tyrion will have him for protection. Tyrion then tells Bronn that if they both survive the battle, he can name his reward. Bronn asks who would want to kill Tyrion and Tyrion explains who has put them in the vanguard. Bronn only laughs and jests that a small man with a big shield will give the enemy archers fits.

Tyrion returns to the tent to find Shae. When Tyrion asks whom Bronn has taken her from, she tells him that the knight was a minor figure and a small man. Tyrion mockingly asks if she takes him for a giant, but Shae insists she does, calling him ‘’my giant of Lannister.’’

Tyrion wakes before dawn to battle horns and Shae’s cries. Outside, Bronn informs him that the Stark host has come down the kingsroad at night and they are forming up for battle a mile north. Tyrion’s well-fitting suit of armor is at Casterly Rock, so Podrick Payne and Shae help him into the ill-fitting oddments that have replaced it. Tyrion asks Shae to weep for him if he dies, but she only asks how he will know. He is helped onto his heavily-armored horse and given his battle-axe. Shae tells him he looks fearsome, but Tyrion disagrees. He instructs his squire Podrick to take her safely home if they lose. As the sun rises and he rides north, the clansmen fall in behind him.

On the battlefield, Lord Tywin commands the reserve in his magnificent armor that puts Jaime’s to shame. Ser Kevan commands the center and Ser Addam Marbrand the right, where Lord Tywin has massed his armored knights. The northmen will be tired after their long sleepless march; Tyrion wonders what Robb Stark was thinking.

Tyrion spies the massive Ser Gregor Clegane with the vanguard massing on the left. Bronn, looking at Ser Gregor, states that it is best to follow a big man into battle since he attracts all the archers, which Tyrion finds amusing. They hear Ser Gregor tell his men that if anyone runs he will cut them down himself. Tyrion receives his orders to hold the left of the left next to the river. When Tyrion’s clansmen reach the Green Fork, Tyrion commands them to keep themselves between the enemy and the river. Then the clansmen raise their battle cry of “Halfman!”

Although the van is all mounted, it is comprised of misfits and sweepings, including half-trained boys. Tyrion notes that the force is unfit to hold the left, and wonders what his father was thinking. When the enemy appears, their numbers seem great, but Tyrion knows that his father has more. He also notes that the Freys are among the enemy. 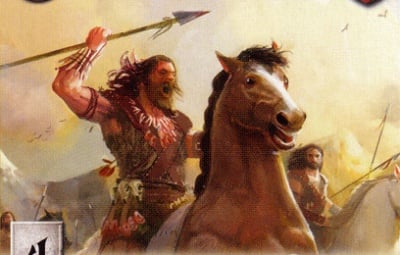 The northerners charge and are answered first by the Lannister bowmen. Ser Gregor orders the charge, and the clansmen quickly leave Tyrion in their dust. The charge nearly breaks against the Karstark spearmen opposing them, but Ser Gregor’s horse crashes through the shield wall as it dies. The monstrous knight rises from his fallen mount and begins slaying men all around. Before the gap in the enemy line can close, Shagga rides through right behind Ser Gregor, followed by the other clansmen.

The northmen’s line begins to crumble under the assault. Then Tyrion and Bronn are in the fight and Tyrion successfully defeats a number of enemies, including a close fight with a tall northerner whom Tyrion only overcomes because his horse bites the man’s cheek, giving Tyrion the opening to kill him. Then a knight with a morning star comes at Tyrion, wounding and unhorsing him. The knight calls for Tyrion to yield, but Tyion uses the spike on his helmet to eviscerate the horse, which falls on the knight, disabling and trapping him. The knight yields to Tyrion. Tyrion can now see that the battle has moved past him. The northerners are being pushed against the hills and pelted by arrows. Finally, Bronn rides up and Tyrion sees his father ride by with the reserves to break the northerners. Tyrion finds the remnants of his clansmen, of whom perhaps half, including Conn and Ulf son of Umar, are dead.

Tyrion searches for his father and finds him sipping wine as his armor is removed. Lord Tywin tells him that his clansmen fought well. Tyrion asks if that surprised him and if they were supposed to be butchered. Lord Tywin admits that he expected the left to collapse, hoping that Robb Stark would press into the breach where they might capture him. Tyrion demands to know why he was not informed. His father declares that a feigned rout is always less convincing and that he is not in the habit of trusting men who consort with savages and sellswords. Lord Tywin continues that the Stark boy proved more cautious than expected, but it is a victory. Then Tywin notes that Tyrion is wounded and Tyrion asks that he call for his maesters.

At that moment, Ser Addam Marbrand rides up with the news that Lord Cerwyn, Ser Wylis Manderly, Harrion Karstark, and four Freys were captured and Lord Halys Hornwood killed. The bad news follows: Lord Roose Bolton has escaped, and Robb has crossed with most of his horse at the Twins and is riding hard for Riverrun. Tyrion remembers his father’s words that the Stark boy would be more brave than wise and thinks that he would laugh if it didn't hurt so much.