Shae is a young camp follower who comes into the service of Tyrion Lannister. In the television adaptation Game of Thrones she is portrayed by Sibel Kekilli.

Shae is fond of expensive clothing and jewels.[7] She can act demure[5] and innocent,[8] but can also be disrespectful.[4][6]

Shae claims she ran away from home when her father attempted to turn her into his kitchen wench and his whore.[7]

Shae is present as a camp follower in Lord Tywin Lannister's army in the riverlands. Bronn brings her to Tyrion Lannister, who is looking for a female companion before the battle on the Green Fork.[5] Tyrion sleeps with Shae both before and after the battle, taking a liking to her.[2]

When Tyrion is named acting Hand of the King by Tywin after the Battle of the Camps, he decides to take Shae with him to King's Landing despite his father's explicit command not to take the whore to court.[9] 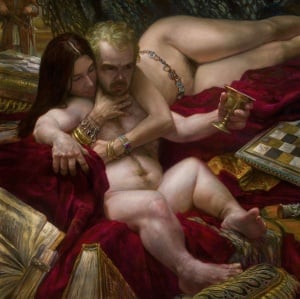 Upon arrival in King's Landing, Tyrion has Shae guarded by Chella and the Black Ears at the Broken Anvil near the Gate of the Gods. Despite Tyrion's efforts to keep Shae's presence a secret, Lord Varys is able to quickly find her through his network of spies.[3] Tyrion cannot bring Shae to court in the Red Keep, so he sets her up in a manse near the Iron Gate. Shae is given servants, silks, and gemstones,[10] and Tyrion has her guarded by ugly mercenaries, including a Braavosi daggerman, a eunuch strangler, and a pair of foul-smelling Ibbenese.[11]

Recognizing that Shae's presence in King's Landing is a weapon his adversaries could use against him, Tyrion takes pains to keep her safe and secret. Varys helps facilitate their trysts by showing Tyrion a secret tunnel underneath the Hill of Rhaenys. Tyrion visits Chataya's brothel to ostensibly patronize Alayaya, but then uses the tunnel to discretely visit Shae's manse.[11] Tyrion makes frequent use of Shae's services, relegating her to a role as his exclusive companion, and he finds his feelings for her are strong. Tyrion believes he has finally gotten over his onetime wife, Tysha, and his need for whoring.[11]

Tyrion sends Shagga to Shae's manse to protect her during the riots in King's Landing.[12]

Shae has Symon Silver Tongue sing to her often in the manse. When Symon recognizes the Hand during one visit, Tyrion swears the musician to secrecy. Shae desires to become Tyrion's lady in public, but he insists such a thing is impossible. Tyrion slaps Shae after she mocks him, and he speaks to her about Tysha.[7]

With Stannis Baratheon's army approaching from the south and with the recent riots in mind, Tyrion fears for Shae's safety.[7] Confiscating her silks and jewels,[13] Varys moves Shae to the Red Keep and finds her a cover job as a maid of Lollys Stokeworth, allowing Tyrion to continue to see her.[7] Varys later guides a blindfolded Shae through secret passages to visit Tyrion in the Tower of the Hand.[14]

Before the Battle of the Blackwater, Alayaya is abducted by the Kettleblack brothers at Queen Cersei Lannister's demand in order to pressure Tyrion; Cersei is unaware that her brother has actually been seeing the hidden Shae. Tyrion promises that whatever the Kettleblacks do to Alayaya, he will have done to Prince Tommen Baratheon.[14]

Shae helps Falyse Stokeworth bring Lollys into Maegor's Holdfast before the battle with Stannis's forces; Sansa Stark thinks the maid looks unhappy serving Lollys.[4] Tyrion is taken into Maegor's to recover after being wounded by Ser Mandon Moore in the battle.[15] 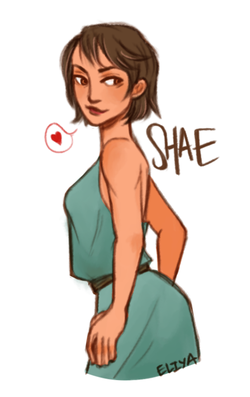 Lord Tywin Lannister resumes his appointment as Hand of the King. When Tyrion visits his father in the Tower of the Hand, Tywin orders him to stop seeing whores, threatening to hang the next one found in his son's bed.[16]

Tyrion and Shae pass each other in the Red Keep, but he dares not speak to other. Varys arranges for the pair to discretely meet in his own chambers so that Tyrion can ask Shae to leave the city. Shae reveals that she recommended Symon Silver Tongue to Lady Tanda Stokeworth, which alarms Tyrion. Shae tells Tyrion details about the upcoming wedding feast for King Joffrey I Baratheon which she learned about from Symon. After they sleep together again, Tyrion allows Shae to remain in the castle.[13]

Lord Tywin forces Tyrion to wed Sansa Stark,[17] but Shae believes that Tyrion will still continue their relationship.[18] Tyrion has Bronn assassinate Symon when the singer threatens to blackmail him with a song about hands of gold.[18]

Shae is made a maid of Sansa's so that she can continue to be close to Tyrion;[8] she reluctantly serves Sansa[6] and complains about Brella's snoring.[8] Tyrion is worried about Shae's safety, torn between sending her away and marrying her off in order to avoid the suspicions of Tyrion's sister, Cersei Lannister, the Queen Regent.[8] When Shae and Tyrion meet on one occasion in the cellar containing the skulls of the Targaryen dragons, Tyrion decides to arrange a marriage between Shae and Ser Tallad the Tall, a knight who has been admiring the pretty maid.[8]

Tyrion spends a sleepless night with Shae before King Joffrey's marriage to Margaery Tyrell.[19] The next morning Shae helps prepare Sansa for the celebration,[6] including arranging the girl's hair in her silver hair net. Shae asks if she can serve Tyrion and Sansa during the wedding feast, but she is refused.[19] When Joffrey chokes to death during the feast, Queen Cersei accuses her brother of murder.[19]

During Tyrion's trial, Shae betrays Tyrion by lying that he conspired with Sansa to murder first King Joffrey and then Queen Cersei, Lord Tywin, and eventually Joffrey's younger brother, Tommen Baratheon. Shae reveals intimate details of their affair, including her pet name for him as her "giant of Lannister", while lying about Tyrion having threatened her. Tyrion responds by publicly demanding trial by battle, and Prince Oberyn Martell offers to be his champion.[20]

Tyrion is condemned to death after Ser Gregor Clegane kills Oberyn in the trial by combat,[20] but Ser Jaime Lannister and Varys help Tyrion escape from the black cells. When Tyrion sneaks into the Tower of the Hand to confront his father, he finds Shae in in Tywin's bed, naked but for the golden chain of office[21] which had once been worn by Tyrion.[16] Shae claims she had been forced by Cersei to lie during the trial, and that she is frightened by Tywin. When Shae again calls Tyrion her "giant of Lannister", he strangles her to death with the golden chain. Tyrion then kills Tywin with a crossbow while he is in the privy.[21]

Shae's body is discovered in the bed where Tyrion had left her. Cersei convinces herself that her father had been questioning Shae about the disappearance of Sansa Stark.[22] Cersei recalls that in exchange for Shae's testimony at Tyrion's trial, she had offered the girl a manse in King's Landing and a knight to wed. The night before Tyrion's trial by combat, Shae had asked about Cersei's promises and the return of jewels given to her by Tyrion. Cersei had refused to grant anything to a tearful Shae, however, unless the girl revealed Sansa's whereabouts. Cersei orders the disposal of Shae's corpse be handled by the Kettleblacks and that her presence in the chambers of the Hand of the King be kept secret.[22]

Tyrion confesses his killing of Shae to Varys.[23] Tyrion recalls her on several occasions during his exile in Essos, sometimes missing her[24] and thinking of her suffering,[25] and other times cursing her name.[26]

Amid the second siege of Meereen, Tyrion remembers how he met Shae before the battle on the Green Fork, as well as how she she struggled when he killed her.[27] 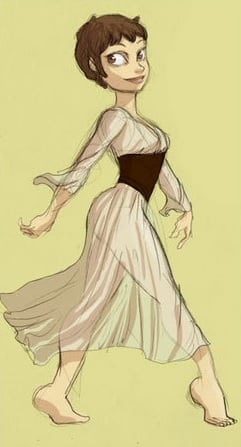 —Shae and Tyrion Lannister, before the battle on the Green Fork

Tyrion: Most men would be deceived.
Shae: And most women, maybe. But not whores. A whore learns to see the man, not his garb, or she turns up dead in an alley.[7]

Tyrion: What do you think they would do if they got their hands on the Hand's lady?


Shae: The Hand's whore, you mean? Though I would be your lady, m'lord. I'd dress in all the beautiful things you gave me, in satin and samite and cloth-of-gold, and I'd wear your jewels and hold your hand and sit by you at feasts. I could give you sons, I know I could ... and I vow I'd never shame you.


Tyrion: A sweet dream, Shae. Now put it aside, I beg you. It can never be.[7]
—Tyrion Lannister and Shae


Shae: More than anything, my giant of Lannister.


Tyrion: For hands of gold are always cold, but a woman's hands are warm.[21]
—Tyrion Lannister and Shae 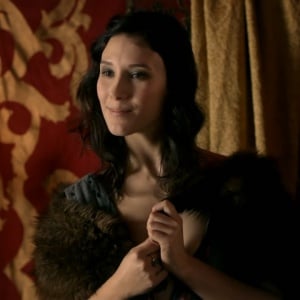 Sibel Kekilli as Shae in Game of Thrones

Shae only stood a shade over five feet, yet still he must look up to her ... but in her case he found he did not mind. She was sweet to look up at.[3]

Shae may only be a whore, but I am faithful to her after my fashion.[11]

I'm free of Tysha now. She's haunted me half my life, but I don't need her any more, no more than I need Alayaya or Dancy or Marei, or the hundreds like them I've bedded with over the years. I have Shae now. Shae.[11]

Tyrion: Pardon me if I do not weep for you.


Varys: I shall, but you must pardon me if I do not weep for Shae. I confess, I do not understand what there is in her to make a clever man like you act such a fool.


Tyrion: You might, if you were not a eunuch.[8]
—Tyrion Lannister and Varys

She did all that was asked of her, but sometimes she gave Sansa the most insolent looks.[6]