A Clash of Kings-Chapter 8

Tyrion dines with Lord Janos Slynt. They discuss the murder of King Robert's bastard daughter, Eddard Stark’s execution, and candidates for Commander of the City Watch. Tyrion then has Slynt taken into custody to join the Night's Watch. Afterward, he discusses the same topics with Varys.

Tyrion offers more wine to his dinner guest, Lord Janos Slynt. The butcher’s son accepts and asks if the wine is from the Arbor. Tyrion replies that the wine is actually an uncommonly rich Dornish vintage. Slynt compliments Tyrion’s gift for words, calling him a lord, but Tyrion points out that Slynt is the true lord and a simple “Tyrion” will suffice. He notes that Slynt does not sip his wine and is so drunk he dribbles onto his fine clothes. Unlike Slynt, Tyrion has gone easy on the wine but certainly not the food, since one of his first acts as Hand was to hire the finest cook in the city. Slynt is very impressed with the food and says perhaps he will hire Tyrion’s cook to serve him at Harrenhal. Tyrion quips that wars have been fought over less. 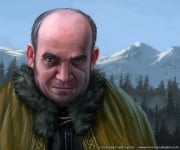 Tyrion declares Slynt a bold man to take a grim and allegedly cursed place like Harrenhal as his seat. Slynt dismisses the superstition and insists it takes a bold man to rise as he and Tyrion have. Tyrion refills Slynt’s cup as he asks about Slynt’s list of proposed successors as Commander of the City Watch. Slynt opines that he would choose Allar Deem, whom he describes as a good and loyal man. Tyrion says he is considering Ser Jacelyn Bywater, a distinguished knight whose name does not appear on Slynt’s list. Slynt argues that Bywater is rigid and thinks overmuch of himself and his honor, insisting that Allar Deem is the one Tyrion wants. Tyrion remarks that Allar Deem is little loved in the streets, but Slynt insists he is feared, which is better. Tyrion brings up that Deem killed a young whore and her infant daughter. Slynt explains that only the child was supposed to die, but the mother got in the way. He says he chose Deem because Deem is a hard man who always follows orders and never speaks of it afterward. Tyrion asks who ordered Slynt to kill the whore's bastard, but Slynt insists he prides himself on being as tight-lipped as Allar Deem.

Tyrion suggests that Jeor Mormont, Lord Commander of the Night’s Watch, could use men like Slynt and Deem, but Slynt responds that there is small chance of that. Tyrion points out that life takes queer turns, as it did with Eddard Stark, who never imagined he would die on the steps of Baelor’s Sept. Slynt laughs that few did and confirms that even Varys was surprised. Slynt also confirms the execution was King Joffrey’s decision, and seems confused when Tyrion points out Cersei planned to allow Stark to take the black.

Tyrion comments on Slynt’s new bloody spear sigil, and asks if Slynt drove the spear into Eddard Stark’s back himself or if he only gave the command. Angered, Slynt insists Stark was a traitor who tried to buy him. Tyrion replies, “Little dreaming that you had already been sold.” Slynt declares he will not have his honor questioned, but Tyrion retorts that Slynt has no honor, though he does admit a spear thrust in the back is a good bargain for a lordship and a castle. Slynt rises and demands what right Tyrion has to chastise him. Tyrion points out that Slynt knows exactly who he is and should thank the gods he does not have to deal with Lord Tywin instead. 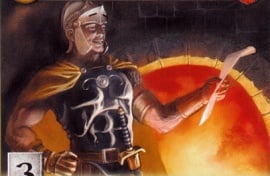 Tyrion declares Slynt’s two younger sons will become squires and the eldest will inherit his title and sufficient lands, but not Harrenhal. Then Tyrion explains that the carrack Summer's Dream will take Slynt to the Wall, where he is to join the Night's Watch and give Tyrion’s regards to Lord Commander Mormont. Enraged, Slynt declares he has powerful friends like King Joffrey, Littlefinger, and Queen Cersei; perhaps Tyrion will be the one banished to the Wall.

As Slynt throws open the door to leave, he comes face to face with Ser Jacelyn Bywater, whom Tyrion introduces as the new commander of the City Watch. As six gold cloaks usher Slynt away, Tyrion hands Slynt’s list of successors to Bywater and asks him to see they accompany Slynt to Eastwatch-by-the-Sea, adding that it would not be taken amiss if Allar Deem was swept overboard.

Soon after, Varys glides into the hall to praise Tyrion’s actions. Tyrion comments that he is tempted to do Varys the same as Deem. Varys replies that Tyrion might be disappointed: the storms come and go, but he keeps on paddling. Tyrion accuses the eunuch of concealing that Cersei sent gold cloaks to kill King Robert’s bastards. Varys asks forgiveness, but Tyrion refuses, angry that he must make a show of punishing the likes of Slynt and Deem while his sister continues on her savage course.

Tyrion insists Varys tell him everything he knows from now on, but Varys only says he knows quite a lot. Tyrion points out Varys did not know enough to save the whore and her child. Varys says he took steps to save another bastard, an older boy, but assures Tyrion he never dreamed the baseborn daughter of a whore would be considered a threat. Tyrion remarks that being Robert’s was enough of a threat for Cersei. Varys blames himself, and comments that the whore loved King Robert. Thinking of Shae and Tysha, Tyrion wonders if a whore can truly love anyone. He recalls that, although he provided her with a rich manse and fine gifts, when he said Shae served him best between the sheets it was not what she wanted to hear.

Tyrion remarks that it seems Joffrey is truly to blame for Eddard Stark’s death, though Slynt and Ser Ilyn Payne carried out the sentence almost as if they expected it. Varys states that Tyrion can prevent further follies with the support of the gold cloaks, but there are still Cersei’s household red cloaks to consider. Tyrion responds that they are loyal to Casterly Rock and outnumbered by his Vale mountain clansmen, not to mention six thousand gold cloaks if Bywater is the man Varys claims. 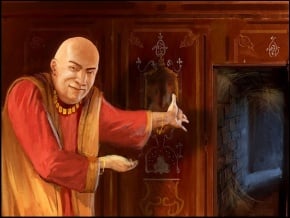 Varys the spymaster - by MarcSimonetti©

Tyrion does not trust Varys, but cannot deny his usefulness. He asks Varys why he is so helpful and Varys replies, “You are the Hand. I serve the realm, the king, and you.” Tyrion asks, “As you served Jon Arryn and Eddard Stark?” but Varys states he served as best he could, and he does not think Tyrion will share the same fate, since power is a curious thing. Varys brings up the riddle he asked Tyrion before. Tyrion says the answer depends on the sellsword, who holds the power of life and death. Varys wonders aloud why men pretend kings hold power if this is true. Tyrion points out that kings can call other swordsmen, but Varys only asks why these other swordsmen obey rather than rule. Neither the godly High Septon, nor the lawful Queen Regent, nor the ever-knowledgeable Varys could prevent Eddard Stark’s death, so who truly killed him: Joffrey who gave the command, Ser Ilyn who swung the sword, or another? When Tyrion asks for the answer to the riddle, Varys declares that power resides where men believe it resides. Tyrion asks if power is just a trick, and Varys agrees it is a shadow on the wall, though shadows can kill and often a very small man can cast a very large shadow.

Tyrion smiles and declares he is growing fond of Varys, and though he may kill him yet he thinks he will feel sad about it. Varys declares he will take that as high praise. Tyrion asks what Varys is, but Varys only says he is a loyal servant of the realm. Tyrion presses on to ask who made Varys a eunuch and who he truly is. Varys’ smile never flickers, but his eyes show a very different emotion as he insists his tale is long and sad.

Varys draws a parchment from his sleeve and reveals the master of the galley White Hart plans to defect to Lord Stannis. Tyrion sighs that they should make an example of the man, which will serve both to discourage other captains and to keep Joffrey busy. Next, Varys informs him Ser Horas and Ser Hobber Redwyne have bribed a guard and plan to escape on the Pentoshi galley Moonrunner. Tyrion instructs Varys to have Bywater send the guard to the Night’s Watch and post a guard on the Moonrunner just in case. Next, Varys notes that the clansman Timett killed a man for cheating at tiles. When Varys confirms the man was cheating, Tyrion declares Timett did all honest men a favor. Next, Varys explains that the red comet has brought all manner of prophets to the city to preach doom and destruction. Tyrion instructs Varys to let them rant. Finally, Varys states that when Lord Gyles Rosby proposed a toast to the king, Ser Balon Swann remarked they would need three cups for that and many laughed. Tyrion insists he is not interested in treasonous table talk, which Varys calls wise.

Tyrion returns to his solar to find Bronn waiting. The sellsword asks about Slynt, and Tyrion admits he has likely replaced one of Littlefinger’s men with one of Varys’. Tyrion asks how the recruiting is going, and Bronn explains that he only hires the sellswords who make a good impression in a duel. Tyrion asks if Bronn has killed any candidates, and Bronn answers, “No one we could have used.” Tyrion asks what should happen if one of them kills Bronn, but Bronn only says that man will be one Tyrion wants to hire. Tyrion asks Bronn if he would kill an infant girl without question when commanded. Bronn replies, “Without question? No. I’d ask how much.” Tyrion remarks to himself that he does not need Slynt or Deem, since he has a hundred such men of his own. He wants to laugh or cry, but most of all he wants Shae.