A Clash of Kings-Chapter 15

The small council discusses Stannis's declaration that Cersei's children are bastards born of incest. Cersei wants the letters suppressed, but Tyrion and Littlefinger convince her they should treat the letters with contempt whilst spreading their own rumor that Stannis' daughter is illegitimate. Tyrion leaves the council to meet with city's smiths to commission an immense chain, then meets with Varys via a secret passage in a brothel. 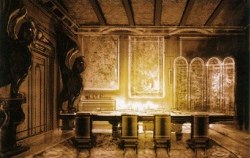 Cersei Lannister is furious upon learning that Stannis Baratheon is circulating letters accusing her of incest. The small council has two copies of the proclamation: one received by Maester Frenken at Castle Stokeworth and a second received by Lord Gyles Rosby. Littlefinger notes that if Stannis sent letters to them, every other lord in the Seven Kingdoms has seen a copy. Cersei wants every copy burned so that neither her father nor Joffrey learns of them, but Tyrion Lannister points out copies have likely been sent to Harrenhal and Casterly Rock as well and the secret is out. When Cersei rages that she is being accused of incest, adultery, and treason, Tyrion is impressed by her acting skills since he knows the accusations are perfectly true. He points out that such claims are to be expected since Stannis needs a pretext to justify his rebellion. When Cersei insists she will not be called a whore, Tyrion only thinks that Stannis never claimed Jaime paid her.

Glancing back over the letter, Tyrion points out the strange words "Done in the Light of the Lord." Grand Maester Pycelle explains it is a term commonly used in Free Cities, and Littlefinger notes that Varys, who is absent for reasons known only to Tyrion, reported years ago that Stannis' wife Selyse took up with a red priest. Tyrion notes that this can be used as propaganda against Stannis.

Littlefinger proposes Shireen's fool Patchface should be called the father to make the story more shocking. Pycelle exclaims that Lady Selyse would never bring a fool into her bed, but Littlefinger replies one would have to be a fool to want to bed Selyse. He adds that the fool's devotion to the girl, and their similarly mottled, half-frozen faces will enforce the tale. Pycelle protests that Shireen was scarred by greyscale, but Littlefinger notes the smallfolk are not known for their intelligence. Cersei smiles and calls Littlefinger wicked, and he thanks her. Tyrion recommends the news not come from them lest it be seen as the self-serving lie it is, and Littlefinger suggests using whores and pot-shops.

Tyrion takes his leave, and when Cersei asks why, he tells her he is having a gift made for Joffrey: a little chain. Cersei retorts that Joffrey has lots of chains and Tyrion cannot buy his love. Tyrion replies that one day Joffrey may treasure this chain above all others.

Bronn is waiting outside to inform Tyrion the smiths he summoned are waiting in his audience chamber. Tyrion compliments the sellsword that he almost sounds like a proper courtier and teases that he will be kneeling next. Bronn responds with, "Fuck you, dwarf." Tyrion counters with, "That's Shae's task." As Bronn escorts him back to the Tower of the Hand, Lady Tanda Stokeworth hails Tyrion, but he ignores her and gives orders for his litter to be prepared. In his chambers, he finds his timid squire Podrick Payne laying out his clothing and the Hand's chain of office.

Entering his audience chamber, Tyrion cuts straight to the point by presenting the assembled smiths with three links of an immense chain and commanding them to make a thousand more. He orders every forge and every metalworker in the city put to work making and joining more links, and puts Goodman Ironbelly in charge of seeing it done. The smiths immediately ask about the queen's orders for armor and weapons, and her threat of crushed hands for missed quotas. Tyrion assures them no hands will be crushed, thinking of the love Cersei is creating for them among the smallfolk. Ironbelly asks about supplies of iron and coke, and Tyrion promises Lord Baelish will see they have enough coin while the City Watch will help them find and melt down every horseshoe in the city for iron if required. Then an older smith, Salloreon, complains that such work is only fit for common smiths, not master armorers like himself. He offers to make Tyrion a terrifying suit of plate instead, but Tyrion replies that he can either make chains or wear them, and then departs.

Outside, Bronn waits with a litter and an escort of Black Ears. As he travels, Tyrion muses that he has set hundreds of carpenters to building fishing boats instead of catapults, opened the kingswood to hunters, and even sent gold cloaks foraging to deal with hunger in the city, but people still give him accusing looks. He also reflects that Cersei missed the importance of Stannis declaring himself king, and wonders what Renly Baratheon will make of it. Peering out into the streets he wonders who the informers in the crowd are, and decides they are likely the most innocent-looking ones. 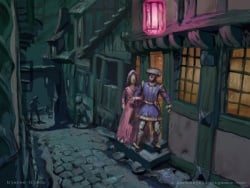 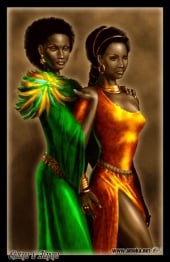 His destination is a two-story brothel behind Rhaenys's Hill. Inside, he is greeted by a tall, black-skinned woman who names herself Chataya. When Tyrion asks to see the girls, Chataya recommends a dark-skinned girl of 16 who turns out to be her daughter Alayaya; in the Summer Isles being a whore is considered an honor and pleasing to the gods. Tyrion wonders what the gods have to do with it, and jests that he would be much more religious if he could pray with his cock.

Leading Tyrion upstairs to the turret room, Alayaya directs him into a wardrobe, where he finds a secret panel and beyond that a hidden shaft leading down to an underground tunnel where Varys waits in disguise. Tyrion asks if Chataya can be trusted, and Varys explains she has no love for the queen and is grateful to be rid of Allar Deem. When Tyrion asks how the brothel came to have a secret entrance, Varys explains that the tunnel was dug for another Hand who would not enter the house openly.

Emerging into a stable, Varys helps disguise Tyrion as a child and saddle a horse to ride to Shae's manse. Tyrion tells him that Stannis has accused Jaime and Cersei of incest, and asks how he came by that suspicion. Varys responds that perhaps someone whispered it to him, or else he simply looked at color of a bastard's hair as Jon Arryn and Eddard Stark did; after all, each of the eight bastards of King Robert that Varys knows had black hair regardless of their mother's color. Tyrion wonders if the whisper might have come from Littlefinger, but Varys refuses to confirm. After Varys helps him mount, Tyrion declares to Varys that he is either his best friend or his worst enemy. Varys replies that he feels quite the same about Tyrion.