The Painted Table is a large carved table depicting Westeros. It is in the Chamber of the Painted Table, a round room on the top floor of the Stone Drum in Dragonstone with four tall windows, overlooking the north, south, east and west.[1]

The Painted Table is a large table, carved from a block of wood and painted in the form of a detailed map of Westeros as it was at the start of Aegon's Conquest.[2] It depicts the landscape and settlements of the continent, but does not include borders.[1]

The Painted Table is more than fifty feet long: roughly twenty-five feet wide at its widest point and four feet at its thinnest. Positioned near Dragonstone's spot on the map is a raised seat that allows the occupant to view the entire table. It is covered by over three hundred years of varnish.[2] Near the table is an iron brazier,[1] and the chamber contains a hearth.[3] 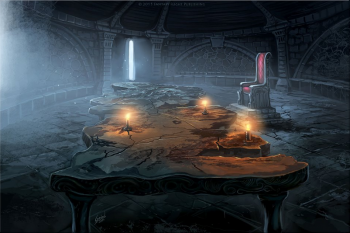 Commissioned by Aegon Targaryen, Lord of Dragonstone, years before the Conquest,[4] the Painted Table was where Aegon the Conqueror planned his invasion of Westeros.[1] While showing the Painted Table to his grandsons, Princes Aegon and Viserys, in 37 AC, King Aegon I suffered a stroke and died soon after.[5]

King Maegor I Targaryen sent letters from the Painted Table after his coronation.[6] King Jaehaerys I Targaryen received visitors in the chamber when he resided at Dragonstone.[7] Androw Farman often spent days in the Chamber of the Painted Table, pushing wooden solders on the great map. After admitting to having poisoned the companions of his wife, Rhaena Targaryen, Androw leapt from the chamber's window to his death.[8]

Maester Cressen speaks with Stannis Baratheon, Lord of Dragonstone, in the Chamber of the Painted Table.[2] Stannis later speaks with Ser Davos Seaworth and Maester Pylos about his claim to the Iron Throne at the table.[9]

Meeting with Davos and Melisandre at the table, Stannis names Davos as his Hand of the King and Lord of the Rainwood.[1] Davos waits for Stannis in the Chamber of the Painted Table after helping Edric Storm escape Dragonstone.[10]

Aegon's carpenters had shaped it after the land of Westeros, sawing out each bay and peninsula until the table nowhere ran straight. On its surface, darkened by near three hundred years of varnish, were painted the Seven Kingdoms as they had been in Aegon's day; rivers and mountains, castles and cities, lakes and forests.[2]

Look at it, onion knight. My realm, by rights. My Westeros. This talk of Seven Kingdoms is a folly. Aegon saw that three hundred years ago when he stood where we are standing. They painted this table at his command. Rivers and bays they painted, hills and mountains, castles and cities and market towns, lakes and swamps and forests ... but no borders. It is all one. One realm, for one king to rule alone.[1]

Stannis might be the King of Westeros in name, but in truth he was the King of the Painted Table.[11]