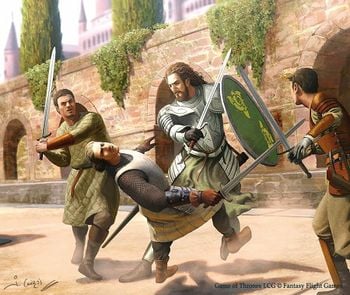 Ser Garlan Tyrell is an exceptionally skilled swordsman, preferring to train against three or four swordsmen, so as to better prepare himself for actual battle. Illustrated by Joshua Cairós © Fantasy Flight Games.

Ser Garlan Tyrell, known as Garlan the Gallant, is a knight of House Tyrell and the second son of Lord Mace Tyrell and Lady Alerie Hightower. His personal coat of arms is two golden roses on green, to denote his status as second son.[10][9]

Garlan is similar in appearance to his younger brother, Ser Loras Tyrell, but he is taller, more broadly built, and has a beard. Garlan is five years older than Loras.[11] He is an exceptionally skilled swordsman, preferring to train against three or four swordsmen, so as to better prepare himself for actual battle,[9] but his lack of interest in gaining glory makes him less famous than Loras.

Garlan was plump in his youth. His elder brother, Willas, shrewdly dubbed him the Gallant to save him from the indignity that befell an uncle, nicknamed Garth the Gross.[12] He is married to Lady Leonette of House Fossoway.[9]

Ser Garlan takes part in the Battle of the Blackwater, playing the part of the late Renly Baratheon by dressing in his armor, to scare the ignorant men-at-arms among Stannis Baratheon's army.[3] "Renly's ghost", actually Garlan,[13] leads the Tyrell-Lannister army's vanguard and slays his opposite number, Ser Guyard Morrigen, in single combat.[2]

In the Red Keep following the battle, Garlan introduces Margaery Tyrell, his sister and Renly's widow, to King Joffrey I Baratheon. Joffrey agrees to set aside his betrothal to Sansa Stark and instead marry Margaery.[11]

Garlan is raised to Lord of Brightwater Keep, the seat of attainted House Florent, as a reward for the Battle of Blackwater.[5]

Garlan speaks and dances with Sansa during her wedding to Tyrion Lannister. He tries to assuage Sansa's fears about marrying Tyrion, despite the fact that most of the Tyrells are avoiding any interaction with Sansa in the wake of their attempts to marry Sansa off to Willas Tyrell having been foiled. Garlan remarks that Tyrion is a "bigger man than he seems" and states that she would be happier with him than Loras, which implies that he knows of his brother's sexual orientation.[12]

Garlan and his wife, Leonette Fossoway, attend the royal wedding of Joffrey to Margaery. While there, he speaks to Tyrion, praising his plans which helped save King's Landing from Stannis Baratheon's forces, and tells Tyrion that he is "made to do great deeds". He also rebukes Joffrey for publicly shaming Tyrion and destroying Tyrion's wedding gift, Lives of Four Kings. Garlan unsuccessfully tries to save the boy king when he chokes to death.[14]

While the Kingsguard meet in the White Sword Tower, Garlan guards the new king, Tommen I Baratheon.[13]

From King's Landing, Garlan brings half of the Tyrell strength back to the Reach to press his claim on Brightwater Keep,[15] which is held by Ser Colin Florent.[16] He is preparing to take Brightwater when news of the ironborn's taking of the Shields reaches him. Garlan begins to gather men from across the Reach to retake the islands.[17]

After Queen Margaery is imprisoned by the Faith Militant, she tells Queen Regent Cersei Lannister that she would want Garlan to represent her in a possible trial by combat. Cersei explains that Garlan would not be able to represent a queen because he is not a member of the Kingsguard.[18]

Tyrion: If I am ever Hand again, the first thing I'll do is hang all the singers.
Garlan: A valiant deed unsung is no less valiant.[14]

Loras: Garlan often trains against three men, or even four. In battle it is seldom one against one, he says, so he likes to be prepared.


Sansa: He must be very brave.


Loras: He is a great knight. A better sword than me, in truth, though I'm the better lance.[9]
—Loras Tyrell and Sansa Stark

King Renly's shade was seen as well, slaying right and left as he led the lion lord's van. It's said his green armor took a ghostly glow from the wildfire, and his antlers ran with golden flames.[19]