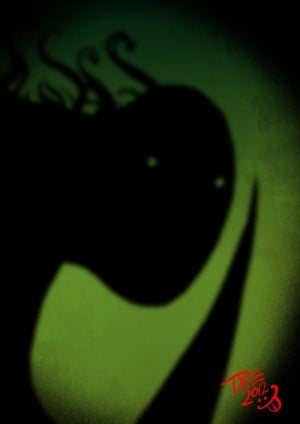 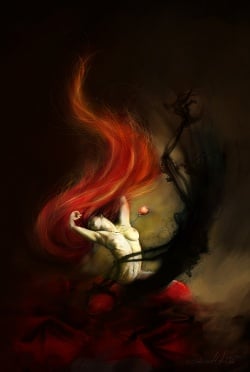 After Renly Baratheon refuses to bend the knee to his older brother, Stannis Baratheon, Catelyn Stark and Brienne of Tarth witness Renly's death. Catelyn sees a shadow that looks like Stannis and a shadow sword that cuts Renly's throat and armor. The shadow then disappears.[2]

After Renly's assassination, Storm's End is besieged by Stannis and his army. Ser Cortnay Penrose, who was left charge of the castle, refuses to yield Storm's End and Robert Baratheon's bastard, Edric Storm. Melisandre has Davos Seaworth sail her under the stronghold. She claims that shadows are servants of the light. She disrobes and Davos watches in horror as the now-pregnant woman gives birth to a shadowy creature. As the shadow emerges Davos recognises the man who had cast it, Stannis. The shadow goes to slay Penrose, allowing Stannis to take Storm's End.[1]

The effect of Melisandre's sorcery on Stannis is significant. He appears to have aged years after siring a shadow assassin on her. Davos notices that his eyes are like dark blue bruises in the hollows of his face. Perhaps this is why no shadow assassin is used during the Battle of the Blackwater. Stannis perceives the actions of the shadow assassins as his own through dreams.[1]

Melisandre visits Davos in his prison in Dragonstone. She tells him that shadows only live when given birth by light. She admits to him that Stannis's fires now burn so low that she dare not draw off any more to make another son, as it might well kill him. She indicates she can make more shadow assassins with another man, implying Davos, but the prisoner rejects her offer, believing their union would only result in a horror. Davos holds fast to the Faith of the Seven instead of Melisandre's god, R'hllor.[3]

Upon her arrival in King's Landing, Brienne of Tarth is confronted by Ser Loras Tyrell over Renly's death. Brienne explains:

I was helping Renly into his armor, and the candles blew out and there was blood everywhere. It was Stannis, Lady Catelyn said. His … his shadow.[4]

When meeting with Jaime Lannister Loras admits to him that Renly's steel gorget was cut through with one clean stroke. He tells Jaime that Renly had the best armor, made of the finest steel, and that even the Mountain would have needed a heavy axe.[5]

Brienne is haunted by Renly’s death. During her quest of Sansa Stark she dreams of what happened in Renly's tent:

All the candles were guttering out and the cold was thick around her. Something was moving through green darkness, something foul and horrible was hurtling toward her king. She wanted to protect him, but her limbs felt stiff and frozen, and it took more strength than she had just to lift her hand. And when the shadow sword sliced through the green steel gorget and the blood began to flow, she saw that the dying king was not Renly after all but Jaime Lannister, and she had failed him.[6]

A shadow is a thing of darkness.[1]

There are no shadows in the dark. Shadows are the servants of the light, the children of fire. The brightest flame casts the darkest shadows.[1]